All Blacks five from five with Pumas win

New Zealand made it five bonus-point victories out of five in this year's Rugby Championship as they beat Argentina 36-17 in Buenos Aires.

The comfortable nature of the win came as a result of a four-minute spell at the end of the first half that saw the visitors score three tries.

In total they crossed five times - through Anton Lienert-Brown, Ryan Crotty, Dane Coles, TJ Perenara and Ben Smith - with Lienert-Brown having a hand in Crotty, Coles and Smith's tries to cap an impressive solo performance.

Facundo Isa was again a rock for the Pumas and was rewarded with a try for his team while Joaquín Tuculet added their other score late on.

As previously said, it was a wonderful first half for the All Blacks, who ran in four tries through Lienert-Brown, Crotty, Coles and Perenara for a 29-3 lead.

Things had started fairly positively for Argentina as they stood up well in the early exchanges and they will feel hard done to when they re-watch the game and find captain Agustín Creevy was denied a try on 18 minutes when the referee thought Isa had knocked on. In fact the impressive number eight had the ball ripped from his grasp in contact by a New Zealander which meant Jaco Peyper's call was incorrect.

Boy did the All Blacks make them pay from then on as, despite only leading by three Barrett points, they opted for scrums, not shots at goal in the red zone. That led to their first try as the aforementioned fly-half found Lienert-Brown who crashed over to make it 10-0.

Nicolás Sánchez got Argentina on the board on 34 minutes following a ruck offence, but then came a triple combination that floored Argentina.

After Israel Dagg was denied brilliantly by Pumas outside centre Matías Moroni on the right wing, New Zealand pounced on a loose line-out and Lienert-Brown was this time the provider, setting up midfield partner Crotty for a converted try that made it 17-3 after 36 minutes.

Lienert-Brown was involved again two minutes later as Santiago González Iglesias' charged-down clearing kick led to Dagg finding his centre who in turn offloaded to Coles. At 24-3 behind the Pumas would have been desperate for the sanctuary of the changing room. It wasn't over.

New Zealand struck again before the turnaround, arguably their best try of the half, as a breakout from their own 22 saw Perenara go over.

The onslaught continued soon after the break and again it was Lienert-Brown heavily involved as his tackle bust and offload sent in Smith. The full-back's try was converted by Barrett as New Zealand moved 36-3 in front with 34 minutes still to play at Estádio José Amalfitani.

New Zealand head coach Steve Hansen knew there was surely no coming back for Argentina, which meant the debut of full-back Damian McKenzie happened sooner than originally predicted. He replaced Crotty as Smith moved forward to outside centre in a reshuffle to the backline.

That however prompted a much-improved spell for the Pumas as, with Joe Moody sin-binned for a swinging arm, the hosts turned the screw at scrum time five metres out. Eventually their power told and it was Isa picking and dotting down under the post to reduce matters to 36-10.

Buenos Aires was rocking and the volume further increased as they pressed for their second try, Sánchez denied by a last-ditch tackle from Patrick Tuipulotu which was deemed high by the officials. He wasn't sin-binned but Liam Squire was soon after for persistent team offsides.

Somehow though New Zealand survived that sustained period on their line thanks to a determined and streetwise effort which they used as a springboard to go down to the other end of the field and almost score. It was Julian Savea who went close but lost the ball over the line.

Perhaps fittingly, due to their physical performance in the second-half, Argentina did have the final say on the scoreboard as Tuculet got hold of a cross-field kick to dive over in the right-hand corner, Iglesias adding the touchline conversion that saw them finish within 19. 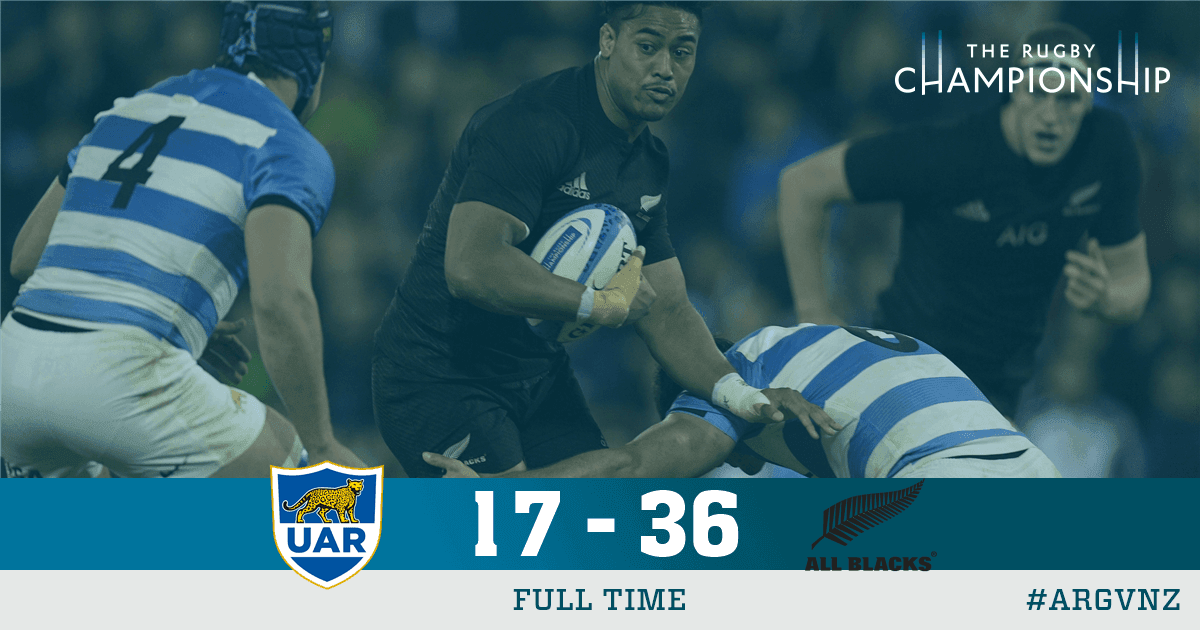