The All Blacks made it three wins from three in the Rugby Championship with a 39-22 bonus-point victory over Argentina at Yarrow Stadium in New Plymouth.

It was a valiant effort from Los Pumas who actually led 16-15 at half-time. But they faded in the last quarter of the match with the scoreline slightly flattering the All Blacks by the time the final whistle was blown.

The All Blacks took the lead after eight minutes. Vaea Fifita busted through a few tackles in midfield. The recycled ball was spread out left to Damian McKenzie who ghosted a through gap and timed his pass on the outside expertly for Nehe Milner-Skudder to dot down.

Los Pumas responded with a Nicolas Sanchez penalty after Kieran Read was penalised for having his hands in the ruck.

The next All Blacks try came off the back of an attacking scrum centre field. The ball was switched to the left before Beauden Barrett's grubber kick was well gathered by Anton Lienert-Brown who dotted down just before the dead-ball line.

Emiliano Boffelli kicked a monster penalty to cut the deficit to four after Agustin Creevy did well to force the penalty as the All Blacks were penalised for holding on.

Nicolas Sanchez then kicked a drop-goal to bring Los Pumas within one after 28 minutes.

Once again, the All Blacks scored courtesy of an attacking scrum. Barrett didn't throw the best of passes over the top to Dagg on the overlap but it was good enough as Dagg went over in the corner.

Argentina did excellently to steal an All Blacks' five-metre defensive lineout after the hooter had gone when the All Blacks were looking to control the lineout so they could kick the ball out and end the half. Creevy made a good carry before the ball was switched out to Sanchez to step well off his left foot and evade the tackle of Fifita to dive over. Sanchez converted his own try to give Los Pumas a 16-15 lead at the break. Barrett's three missed conversions cost his side at the interval.

Boffelli kicked another monster penalty shortly after the resumption of the second-half to extend Los Pumas' lead to 19-15. Sanchez missed a chance to extend the lead to seven after he shanked an easy penalty.

Barrett was yellow-carded for being offside after repeated infringements from the All Blacks in the face of persistent Argentine pressure on the All Blacks' try-line. This time, Sanchez slotted the resulting penalty.

Fifita then scored a magnificent individual try. It came from Tomas Cubelli's attempted box-kick being charged down. After the All Blacks had regathered the ball, the ball was switched to Fifita, who fulfilled all the pre-match hype when he showed electric pace to sprint fifty metres and dot down in the left-hand corner. Lima Sopoaga, on as a substitute for Barrett, slotted the conversion to level the score at 22-22 after 53 minutes.

Persistent pressure from the All Blacks paid off when Damian McKenzie dotted down in the left-hand corner after TJ Perenara did well to find him on the overlap with a skip pass. Sopoagao added the extras as the All Blacks extended the lead to 29-22 with 15 minutes to play.

Sopoaga slotted a penalty to extend the All Blacks lead to 32-22 with ten minutes to go.

After some relentless pressure from the All Blacks, Barrett put the icing on the cake scything through the Los Pumas defence after a good decoy run by Lienert-Brown. Sopoaga added the extras to make it 39-22. And that's how it ended. 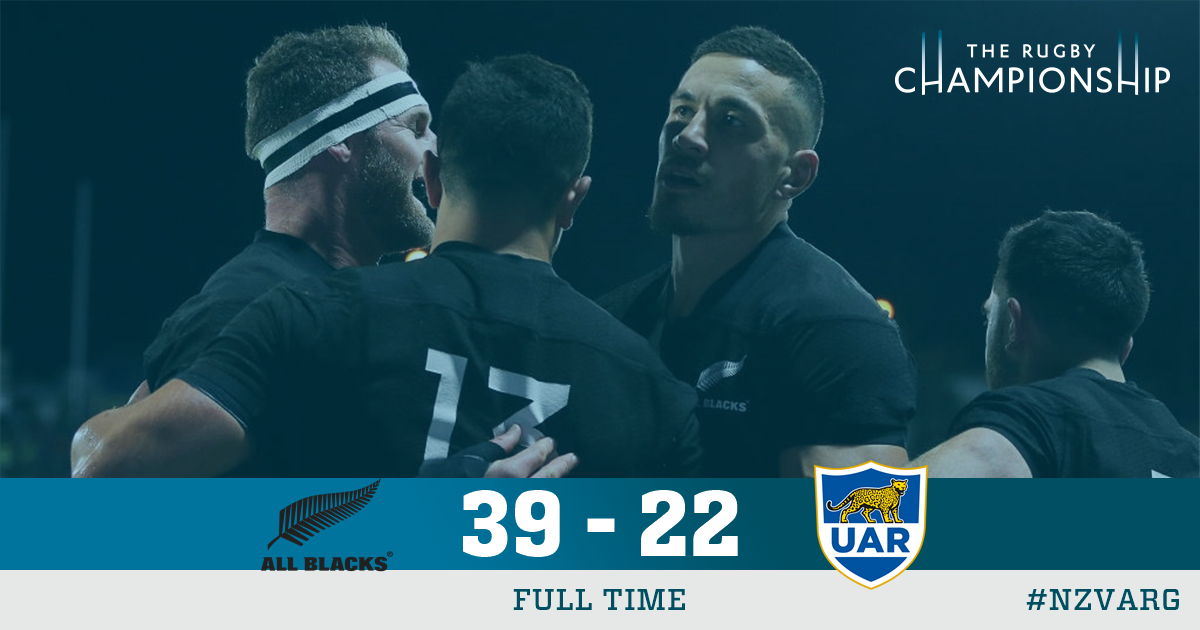