All Blacks Not at Best in Paris

The first the All Blacks at their best in scoring four tries to get out to a 31-5 lead but it was only in the last play of the game, when Waisake Naholo scored his second try of the Test, that the All Blacks scored their only points of the second half.

There were stages when the momentum shift to France bore a resemblance to the 1999 World Cup semi-final between the sides when the All Blacks seemed powerless to contain the French. Their concession of penalties was a constant frustration. The difference with 1999 was the defensive play of the New Zealanders proved more sustained.

However, there would have been great comfort for France from the performance of their young inside backs, halfback Antoine Dupont and first five-eighths Anthony Belleau. Dupont was speedy on the break and consistently looked the most likely French player to breach the line.

Belleau was composed and directed the side well. French centre Mathieu Bastareaud was used to try and batter the defence but was generally well contained and one turnover on him by Naholo proved vital in denying the French momentum that could have caused problems.

The All Blacks scrum proved crucial also and four minutes from the end a French decision to take a scrum from a penalty in front of the New Zealand posts resulted in the French being pushed off the ball and a penalty conceded which allowed the All Blacks to clear.

The All Blacks played much of the second half without skipper Kieran Read who was suffering a groin niggle.

A sixth minute off-load by centre Ryan Crotty inside to second five-eighths Sonny Bill Williams saw him drive over the line but held up and a five-metr e scrum followed. Halfback Aaron Smith tried to set up a move off the scrum but the defence held, initially. But when the ball was moved again Barrett fed hooker Dane Coles through for the opening try.

Scrums became an issue, especially when the French were defending from a series of five-metre scrum where they were constantly under pressure from the power of the All Blacks scrum. In the 22nd minute the All Blacks gained sufficient control for Ioane to take the ball up when entering from the blindside.

From the ruck on the goalline, Barrett threw a long pass to the unmarked Naholo who was unchallenged to score. But the try came at the expense of Coles who left the field with a leg injury to be replaced by Codie Taylor.

Three minutes later the French replied when from a lineout in the All Blacks' 22m area they played the move at the front of the lineout and surged ahead. Centre Mathieu Bastareaud entered the line and flicked an offload to flanker Kevin Gourdon and he set up a backline move which saw wing Teddy Thomas over in the corner.

French scrum problems continued however, and in the 35th minute tighthead Rabah Slimani was sin-binned for another collapse. New Zealand took the lineout option and after some pick-and-go plays the ball was released with Williams slipping a grubber kick to the in-goal area where Crotty won the race to score what was the All Blacks' 2000th Test try. 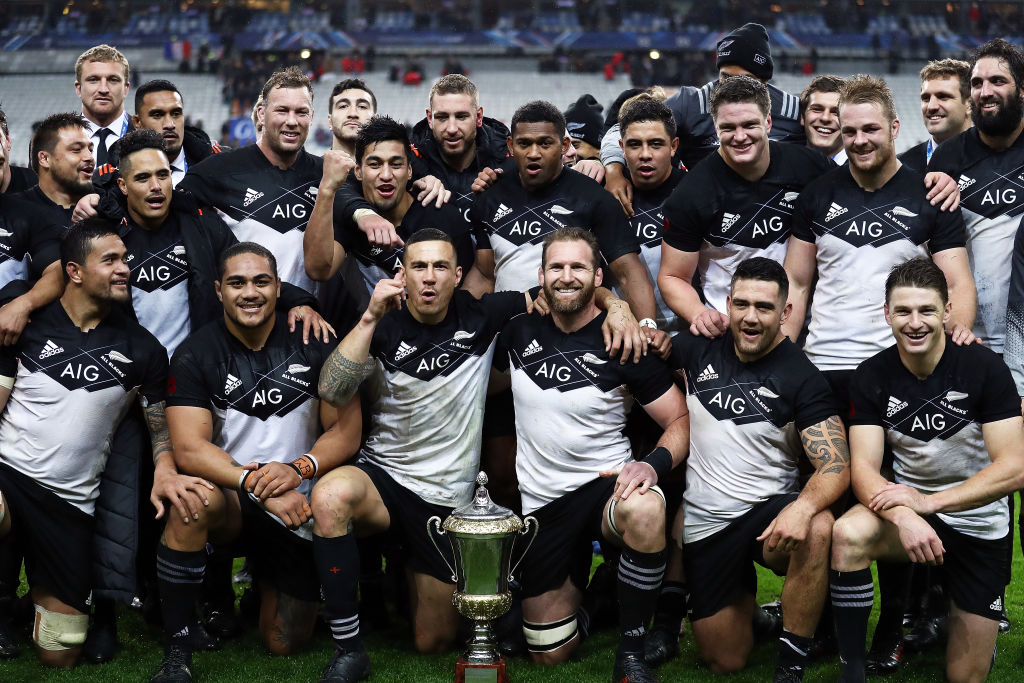 France failed to secure the ball at the re-start and Taylor tidied before Smith launched a high kick to fullback Nans Ducuing. He couldn't take the ball and New Zealand secured it with the ball being moved to the left flank. McKenzie fed Ioane and stayed in support for the in-pass and then passed to flanker Sam Cane who was perfectly placed to score on the halftime break.

New Zealand lost Sonny Bill Williams for a deliberate slap over the deadball line. It didn't help the rhythm of the All Blacks game when he was yellow-carded. Referee Angus Gardner consulted the TMO and ruled that if Williams hadn't slapped the ball a try would probably have been scored, this in spite of the fact the French attacker was behind him. After Belleau's 42nd minute penalty goal France had pulled the margin back to 15-31.

Gardner was involved in another different ruling in the 55th minute when a penalty had been awarded and Belleau kicked the ball behind the mark and lock Sam Whitelock led the charge only for Gardner to say he was still standing on the mark.

From that the French built another attack which saw Thomas ruled to have had his foot in touch before touching down for a try.

But the French contested the All Blacks' lineout and only strong defence allowed them to escape with only a penalty conceded.

In the last action a long kick by replacement halfback TJ Perenara was followed up well by Ioane and in the pressure created the opening came for Naholo to score.