All Blacks squeeze past Springboks

The All Blacks finished with a perfect Rugby Championship record as they secured a 25-24 win over the Springboks at Newlands in Cape Town.

The first half saw opportunities but good last-ditch defending from both sides was on show, especially the Boks who kept the All Blacks relatively quiet and just conceded the one try in the opening 40.

The Boks successfully managed to unsettle the All Blacks at the contact and breakdown area with Malcolm Marx and Pieter-Steph du Toit especially good on the ground. This saw the All Blacks conceding a number of penalties. In fact, hooker Marx made an incredible four turnovers.

The All Blacks were lucky to win in the end as the Boks actually had them under pressure for large periods of the second half but were unable to turn that dominance into enough points and in the end the All Blacks showed they are just more clinical and able to win games ugly when being second-best.

South Africa won a penalty in the ninth minute when All Blacks lock Sam Whitelock was penalised for having hands in the ruck. Springbok fly-half Elton Jantjies slotted the penalty between the posts for a 3-0 lead.

All Blacks fly-half Beauden Barrett responded with a penalty just two minutes later. But this was the only action of the first quarter.

Jantjies missed an easy chance to put the Boks back into the lead after Sam Cane was guilty of going offside.

The game was brought sparkling to life on the half-hour mark as Barrett's kick-through was well chased down by All Blacks centre Ryan Crotty who dotted down to give the All Blacks an 8-3 lead with Barrett missing the resulting conversion.

The Boks applied persistent pressure after the interval and were rewarded with scrum-half Ross Cronje dotting down on the base of the post after 14 sweeping phases. Jantjies put the home side 10-8 in the lead with the conversion.

The Springboks continued to dominate but were unlucky to trail when completely against the run of play, Rieko Ioane pounced on a loose Bok pass and had the pace to outsprint the opposition defence all the way from deep in his own 22. Lima Sopoaga added the extras to give the All Blacks a five-point buffer at 15-10.

But the Boks weren't to be denied as finally they had tangible reward for their pressure when substitute Jean-Luc du Preez crossed the whitewash after fellow substitute Handre Pollard did well to get his hands free in the tackle, offloading to Marx who showed good handling skills before he played the final pass for Du Preez to have a clear run to the line. Pollard's conversion put the Boks back in front at 17-15 with 12 minutes to play.

Soon after, All Blacks full-back Damian McKenzie scored a magnificent individual counter-attacking try capitalising on a disjointed, shifting Springbok defence with his scything run after David Havili did well in the build-up to set up the break. Sopoaga converted to restore the All Blacks' five-point buffer at 22-17 with 10 minutes to go.

With five minutes to play, Damian de Allende was shown a red card for his follow-through in trying to charge down Sopoaga's drop-goal in which he connected with the All Blacks replacement fly-half. Sopoaga kicked the resulting penalty to make it 25-18, meaning a converted try would not be enough for the Boks.

Despite being a man down, the Boks fought back to within just one point when Marx crashed over at the back of a lineout driving maul to set up a tense finale.

But the All Blacks held on for victory and denied the Boks a rare victory. 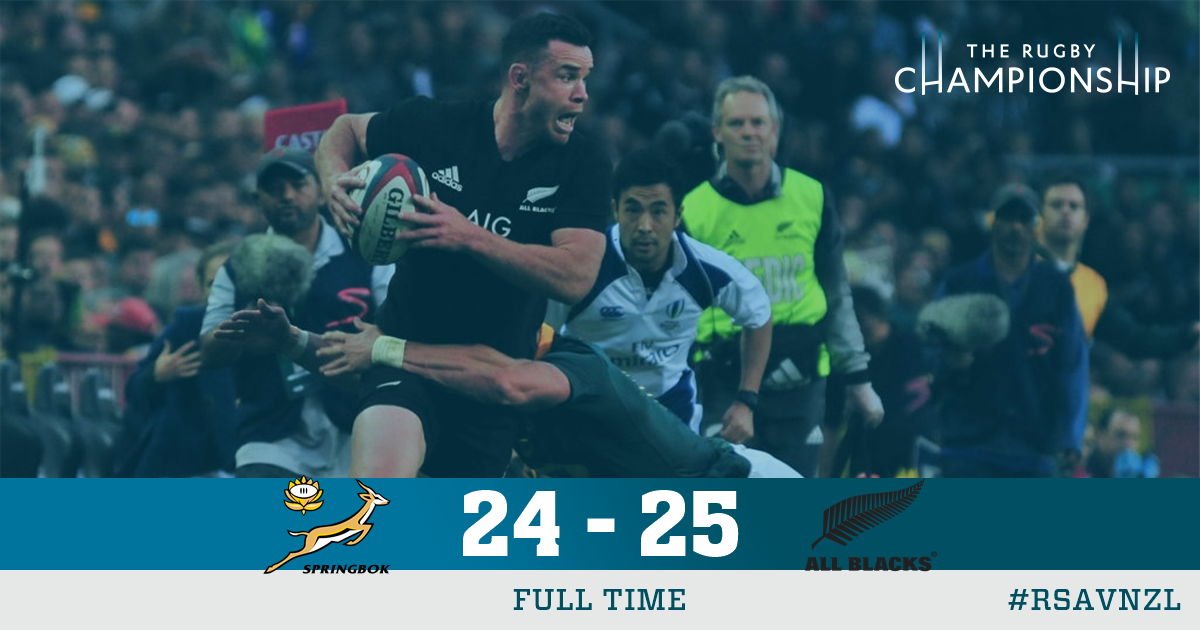