Boks ease past Pumas in Salta

South Africa made it two wins out of two in the Rugby Championship after they beat Argentina 41-23 at Estadio Padre Ernesto Marlearena.

Crossings from Siya Kolisi (2), Elton Jantjies and Jean-Luc du Preez as well as a penalty try saw the Springboks to an impressive victory.

In reply the Pumas' scores came from Ramiro Moyano and Matias Moroni but they were hindered by a red card from lock Tomas Lavanini.

Argentina took an early lead on four minutes when wing Emiliano Boffelli showed off his powerful boot following a ruck penalty. That shot from 55 metres though should've been chalked off by Jantjies but the Springbok fly-half missed with his first two kicks soon after.

It took until the 20th minute for the game's first try and it went the way of South Africa and Jantjies was the provider, his chip kick on halfway finding Jesse Kriel whose offload to Kolisi saw the flanker go in untouched. Jantjies would make no mistake from in front for 7-3.

Jantjies made it 10-3 seven minutes later with a penalty but the visitors' joy was shortlived when the restart was allowed to bounce and Pumas wing Moyano duly gathered for a gift wrapped try. Juan Martin Hernandez made no mistake off the tee and the game was locked up at 10 points each.

South Africa came close to striking straight back through Andries Coetzee but Kolisi's pass was adjudged to be forward so it was disallowed.

They wouldn't be denied though on 39 minutes when Jantjies slipped a tackle and reached out for a try to make it 17-10 at the turnaround.

After the interval Hernandez cut the lead to four points with a penalty on 45 minutes before good interplay between Coetzee and Courtnall Skosan after a turnover set up a second try for Kolisi. Once again the final pass to Kolisi came from Kriel as the Springboks led 24-13.

Then came Lavanini's second yellow card for a deliberate knock down and that was compounded by a penalty try being given, making it 31-13.

On the hour mark the Pumas hit back through Joaquin Tuculet's converted try and with a Boffelli penalty they were only trailing by eight.

With eight minutes remaining though a Jantjies penalty made it 34-23 before replacement Du Preez made sure of an impressive away victory. 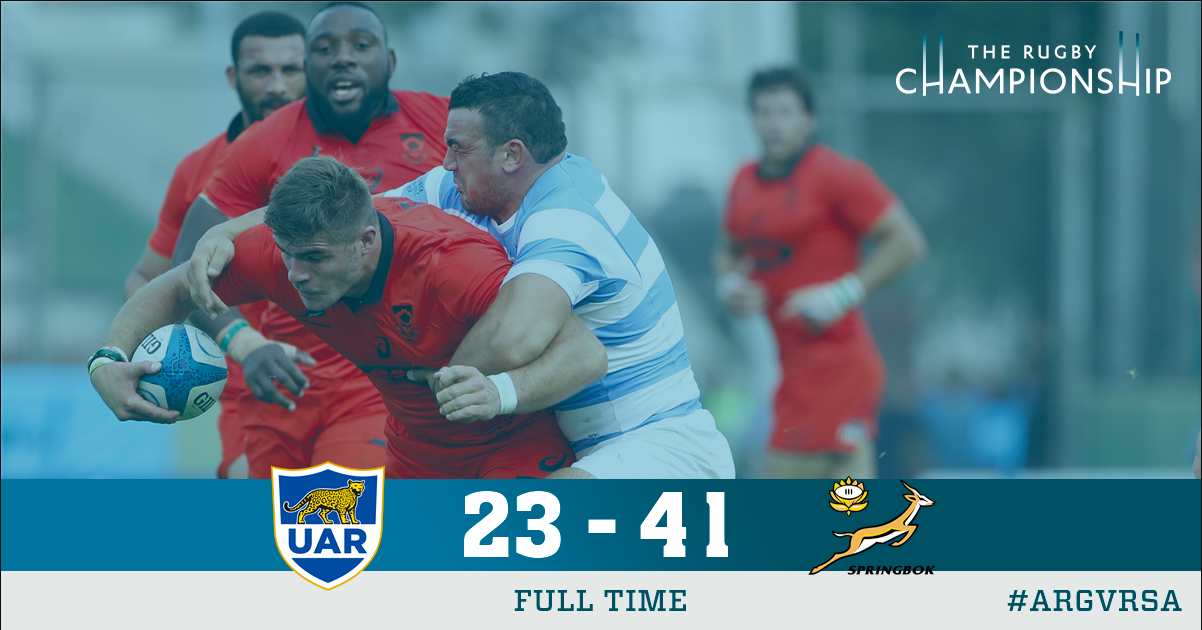