First Test: All Blacks Too Strong For Lions

The All Blacks drew first blood in their Test series with the Lions when they claimed a 30-15 win over the tourists in an epic game in Auckland.

There was plenty of hype in the build-up to this Test and that was certainly justified as both sides went at each other hammer and tongs for the full 80 minutes.

The All Blacks eventually outscored their visitors three tries to two with Rieko Ioane leading the way with a deserved brace and Beauden Barrett finished with a 15-point haul courtesy of three penalties and three conversions.

In a thrilling contest with plenty of end-to-end action, the All Blacks led 13-8 at the interval with Codie Taylor crossing the whitewash for the All Blacks and Sean O’Brien scoring a superb try for the Lions.

The Lions were competitive for large periods but like so many Tests in the past, the All Blacks showed why they are the world champions by blowing their opponents off the park with a fine second half showing.

The Lions made a superb start and an early Jonathan Davies line break had the All Blacks defence at sixes and sevens. Davies did well to get a pass out to Conor Murray, who was stopped just short of the All Blacks’ tryline and the ball was recycled quickly to Elliot Daly, who went over in the left-hand corner. But television replays revealed that Israel Dagg had done well to hold Daly up after making a brilliant cover tackle.

The next 10 minutes was a tense affair although the All Blacks were gradually gaining the upperhand. The world champions looked impressive with ball in hand with Jerome Kaino, Sonny Bill Williams and Brodie Retallick leading the way with solid carries.

One passage of play saw the All Blacks taking the ball through 11 phases before Barrett delivered a teasing crossfield kick but Anthony Watson saved the day for the tourists with a spectacular over-the-head catch inside his 22 before clearing his line from the resulting mark.

The home side eventually took the lead in the 14th minute courtesy of a Barrett penalty after Tadgh Furlong infringed at a ruck and their early dominance was rewarded with the opening try five minutes later thanks to quick thinking from Aaron Smith.

With the All Blacks handed a penalty deep inside the Lions’ 22, Smith caught the defence napping by playing quickly. The ball was shifted wide to Dagg, whose pass to Taylor was gathered brilliantly on his toes by the hooker before he crashed over in the right-hand corner for the opening try.

The next 10 minutes was an attritional affair but although the All Blacks held a slight edge they could not extend their lead. On the half-hour mark, Owen Farrell opened the Lions’ account after Owen Franks was blown up for a ruck infringement and with points finally on the board, the Lions seemed reinvigorated.

Barrett added a second penalty three minutes later before O’Brien got over for one of the best ever tries scored at Eden Park. Liam Williams deserves plenty of praise for his role in the score as it was his counter attack, from deep inside his 22 which tore the All Blacks defence to shreds. 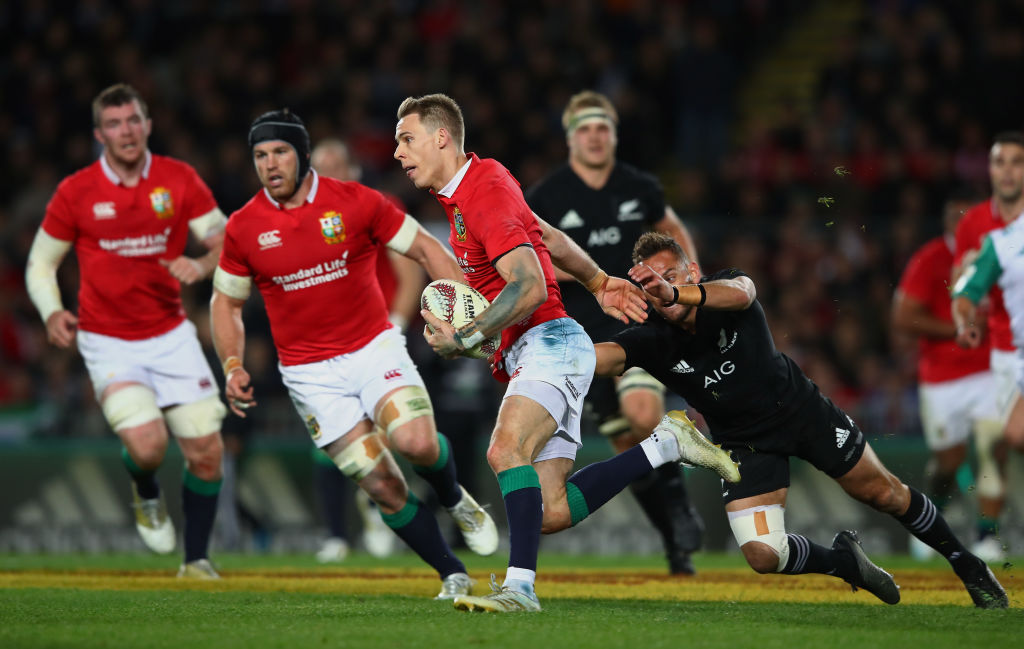 After beating five defenders, Williams’ progress was eventually halted close to the halfway mark but he did well to offload to Davies, who traded passes with Daly before Davies got a pass out to the on-rushing O’Brien who crashed over for a deserved try.

The attritional nature of this contest continued in the second half although the Lions wasted a chance to draw level when Ben Te’o slipped while trying to take the ball into contact inside New Zealand’s 22, when he had Watson in the clear on his outside.

That decision proved costly as the All Blacks extended their lead in the 55th minute when Ioane went over for his first try. This, after the All Blacks pack destroyed their counterparts at a scrum and the ball was taken out wide to the 20-year-old, who dived over in the left-hand corner.

Barrett added the extras and added a penalty five minutes later which meant the hosts were in control with the score at 23-8 in their favour by the hour-mark.

With the visitors needing to score twice to take the lead, confidence grew in the All Blacks ranks and they sealed their win when Ioane pounced after Williams dropped a high ball midway between the halfway mark and the Lions’ 10-metre line.

Despite being first to the loose ball, Ioane still had work to do but his pace proved too much for Daly and he sealed the win for the hosts when he went over for his second try.

That score knocked the wind out of the Lions’ sails but to their credit, they did not surrender. They spent most of the closing stages camped in the All Blacks’ half and were rewarded just before full-time when Rhys Webb crossed for a consolation try from close quarters.