New Zealand cruised to a 78-0 thrashing of Samoa at Eden Park on running in 12 tries in their warm-up for the Lions series.

Tries from Anton Lienert-Brown, Beauden Barrett, Ardie Savea and Sonny Bill Williams gave New Zealand a comfortable 28-0 lead, at the end of a first half where Samoa had big chances to score but failed to capitalise, not to mention being on the wrong side of a contention decision for the first try.

Once Samoa's confidence dipped after Savea's ruthless score off first-phase, the outcome of the contest felt familiar as the All Blacks shook off that early rust.

It was the visitors who had the better start, impressively retaining the ball for 20 phases and testing the All Blacks' defence early on. An attack that started right back in their own half moved all the way up to just short of New Zealand's try line, only to be brought to an end for a neck roll by Faifili Levave.

Inevitably after a tough opening the All Blacks began to settle, Lienert-Brown scoring a fortuitous opener.

After a five-metre scrum Beauden Barrett did his best to power over, before his loose offload luckily fel into the hands of his centre to dot down. Replays suggested Ardie Savea may have lost the ball forward at the initial scrum, but the score stood.

Albert Nikoro attempted to respond swiftly for Samoa, his long-range penalty from inside his own half falling short of the sticks, but there was no faulting their attitude early on as the opening quarter ended 7-0.

A sweet sidestep from Tim Nanai-Williams left his cousin Sonny Bill Williams rooted to the spot, only for the Samoa break to come to nothing. A second long-range penalty effort came up short again, but Samoa continued to dominate at the breakdown, winning multiple penalties in that area in the first half.

Frankly it was an excellent first half an hour for Samoa, who deserved some points as a reward, Alapati Leiua cutting the All Blacks' defence open again.

Instead the hosts countered, turnover ball deep in their own 22 transformed into an attack by captain Ben Smith, mutiple offloads leading to Beauden Barrett hacking on and producing a quality slide to regather the ball and add New Zealand's second try on his 50th cap. His subsequent conversion made it 14-0.

There was nothing lucky about their third. try. A set-piece move off the scrum, Barrett's speed to beat the cover defence opened up the space, with Lienert-Brown's inside pass putting away Ardie Savea to make it 21-0.

It could have soon been four, a one-two between Brodie Retallick and Israel Dagg ending with the All Blacks lock unable to haul the ball in with the line in front of him. 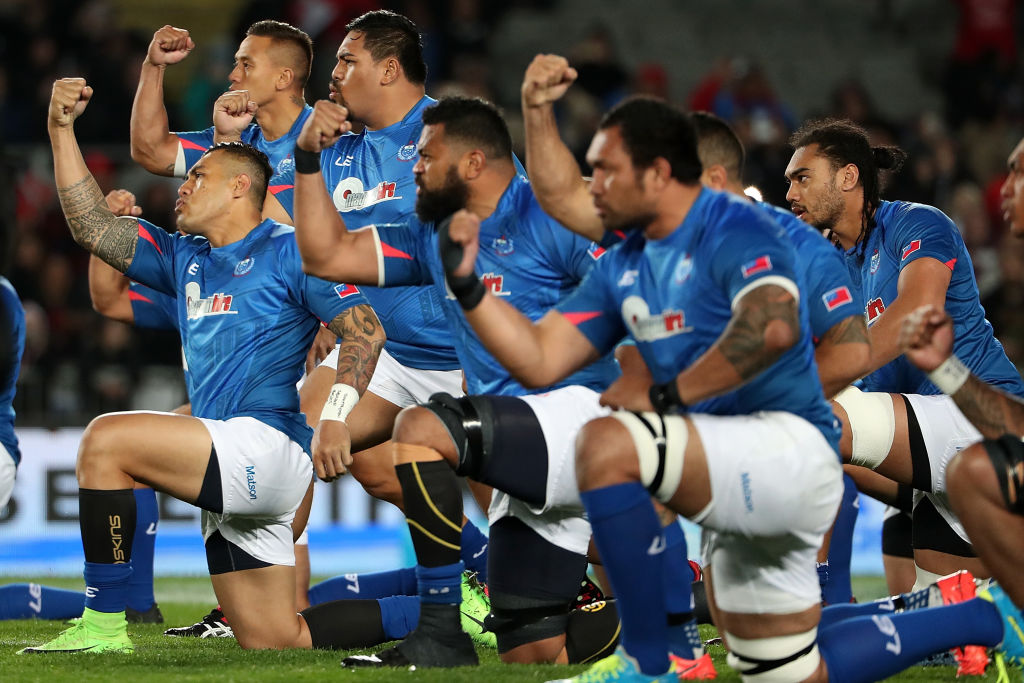 There was still time however before the half was out. Opting for a short-range scrum off a penalty, Sonny Bill Williams could not be be stopped crashing up close to the posts. Beauden Barrett's conversion meant the All Blacks went into the break up 28-0.

It was a similar story to start the second half, Lienert-Brown's quick feet and well-timed pass giving Dagg an easy run to the line. Faced with his toughest kick of the night, Beauden Barrett converted from out wide.

Julian Savea got in on the act with his 46th Test try, and possibly the easiest, thanks to Retallick's rampaging run before the All Blacks spread the ball wide, Lienert-Brown again with the final pass. Beauden Barrett missed for the first time, leaving the score at 40-0.

There was always more to come, Scott Barrett and Beauden Barrett combining and despite the best work of Ahsee Tuala, New Zealand drove over all too easily only for Aaron Smith to bomb a golden chance. With Samoa out on their feet and still having a man treated Taylor added to the tally, Ben Smith too quick and too sharp for a scattered defence.

On came Vaea Fifita for his All Blacks debut with the pick of the tries coming next. TJ Perenara's run, Williams' straightening and offload all made the space down the touchline for Beauden Barrett to slide over for his second try, adding his seventh conversion before being replaced by Lima Sopoaga.

Fifita then capped his debut with a try, finishing off a sweeping move started by a Scott Barrett break but truly made by Dagg's goose step and acceleration past Tusi Pisi.

Perenara added try number ten after Sopoaga's break, making the score 66-0, before an all-Hurricanes score saw Perenara and Julian Savea combining to put away Ardie Savea with a cute chip over the top.

Jordie Barrett's fine offload on debut then started the move for the 12th and final try by Cane, as Sopoaga had a late score ruled out. All Blacks rusty? No chance.