The British & Irish Lions ended their midweek match schedule with a 31-31 draw against the Hurricanes at Westpac Stadium in Wellington.

Tommy Seymour (2) and George North crossed for the Lions while Dan Biggar kicked 16 points off the tee as the Lions let slip a 31-17 lead.

The Lions would have been pinching themselves to be 23-7 in front at the break as two tries were somewhat gifted to them. However they took their chances when they came which will have pleased coach Warren Gatland as it’s a trait the tourists have struggled with in New Zealand.

Biggar nudged them in front on 10 minutes after the Hurricanes’ backline had strayed offside, with the pace of the game already impressive.

The Hurricanes were then looking to bounce back in style but sustained pressure on the 22 would lead to wing Seymour rushing up – looking very close to being offside – and forcing the loose pass which Greig Laidlaw collected. The scrum-half raced over halfway but was brought down and then offloaded to the supporting Seymour who had the necessary speed to go in under the sticks. Biggar made it 10-0 off the tee.

10-0 became 13-0 on 24 minutes as the Hurricanes’ woes continued, this time scrum-half Te Toiroa Tahuriorangi was penalised for tackling Lions centre Jonathan Joseph in the air. Biggar was on target again from distance to hand the tourists a welcome advantage in Wellington.

Finally the ‘Canes got on the board after half-an-hour as a passage of 10 phases led to soon-to-be Glasgow flanker Gibbins powering over. With Barrett’s extras it was 13-7 but soon after the restart Biggar was kicking again, this time after Ben May was pinged for obstruction.

The Lions weren’t done too as they pounced on loose ball 30 metres from the Hurricanes line and Iain Henderson found North for the run-in. Biggar made it 23-7 which, despite a late push from the hosts, was how the scoreline remained going into the break. The Lions were happy.

It took less than one minute into the second-half for the tourists to be pegged back though as a slick backline move led to Julian Savea finding Laumape on the wing, with the centre showing his brute force in crashing over Biggar for the score which Barrett converted from wide out. 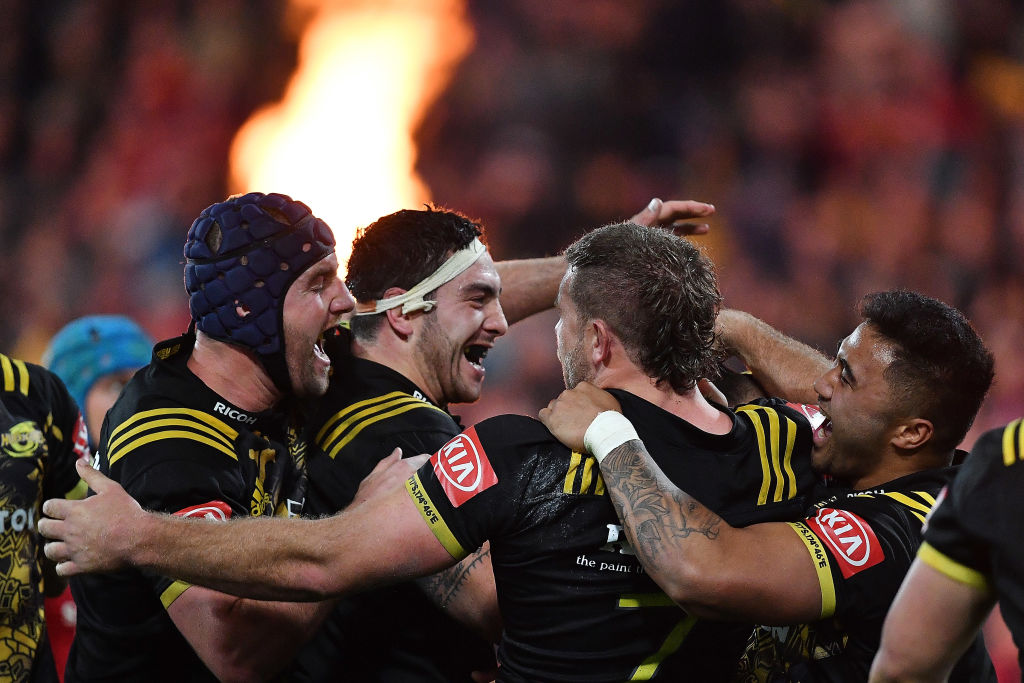 Compounding the Lions’ woes from the try was Biggar needing a HIA, replaced by Finn Russell, who made his bow on a special moment for him.

The Hurricanes now had their tails up but couldn’t further cut the gap on 47 minutes, as Barrett was wide with a long-range penalty shot.

Barrett did make it 23-17 on 50 minutes but Biggar responded soon after, coming after Tahuriorangi sin-binned for a high tackle.

The Lions made their numerical advantage count as quick hands to the left found Seymour, who ran in for his double as the Lions led 31-17.

North came close to extending the gap and claiming a double of his own in the 63rd minute as he collected a grubber ahead but he put a foot in touch. That kept the Hurricanes within two converted tries of picking up a draw, which seemed unlikely as the Lions appeared the stronger outfit.

That all changed on 65 minutes though as the Hurricanes were handed a lifeline when lock Henderson was yellow carded for tipping Barrett over the horizontal at a ruck, sparking a home surge which led to the latter finding replacement Goosen for a run. Suddenly it was 31-24.

Incredibly the Hurricanes were level moments later as they went through the heart of the Lions defence, Fifita the man crossing under the posts to allow Barrett the simple conversion to make it 31-31. The Lions had to quickly calm the situation as the ‘Canes were on the march.

The Lions were scrambling to survive on their own try-line and ultimately did due to a ‘Canes offence before late drama saw Biggar have a drop-goal to win the game. It fell short of the cross-bar as the teams had to settle for a draw.