Wallaby Dean Mumm will miss his team’s end-of-year tour opener against Wales due to suspension for foul play.

Mumm was cited for striking All Blacks lock Brodie Retallick in the 55th minute of the Wallabies’ 37-10 loss to the All Blacks in Auckland at the weekend.

The 32-year-old seemed to elbow Retallick high, with the All Blacks lock going down, though the movement followed vision where Retallick appeared to hold Mumm back.

The incident was missed by referee Nigel Owens at the time, but the citing commissioner deemed it met the red card threshold in his review of the match.

Mumm pleaded guilty to the charge, which has an entry point of a two-week suspension, but Mumm was offered one week by the SANZAAR judicial officer, due to mitigating circumstances, which he accepted.

The talented Itoje who was very prominent in England’s 3-0 series win against Austraia in June will require surgery after fracturing his right hand, which rules him out of England's November Tests.

The second-row injured his hand during Saracens’ 44-26 win over Scarlets in a  European Champions Cup match and has been ruled out of action for six weeks.

Mark McCall, Saracens Director of Rugby, said: "For any team to lose a player of the ability of Maro is a blow and he will be missed through the autumn for both Saracens and England," McCall said. 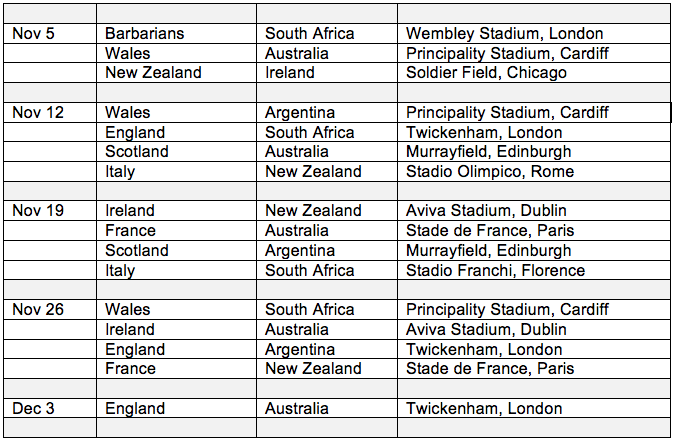 Wales at Full Strength for Wallabies test in Cardiff

English Premiership clubs will release their Welsh players as a once off gesture for Wales’s Test against Australia on November 5.

The fixture falls outside of World Rugby’s agreed Test window, but Premiership Rugby, the body which represents the Premiership clubs, have confirmed that its sides have agreed to a one-off change to their policy over the release of players for Test matches.

This means stars like George North and Jamie Roberts will be available for the clash against Australia in Cardiff.

Because the Test falls outside of the international window, Wales would have been without some of their premier talent but now the likes of Roberts, North, Tomas Francis, Ross Moriarty and Luke Charteris will all be available for the match against the Wallabies.

Ireland coach Joe Schmidt has committed himself to the job until the 2019 World Cup, ending months of speculation about his future.

Appointed in 2013, Schmidt has been involved in a period of sustained success and achievement with the national team.

Back to back Six Nations titles were secured in 2014 and 2015, a first Test Series win in the southern hemisphere was recorded in Argentina in 2014 and a first ever Test victory on South African soil was achieved in Cape Town at the end of the 2015/16 season.

“I’d like to thank the IRFU for their patience and confidence as the decision to continue took somewhat longer than I’d anticipated,” Schmidt said.

“It is difficult at times being so far away from extended family but we appreciate how lucky we are to have the support we have here in Ireland. The strength of the rugby community has been incredibly visible over the past week and the enthusiasm of management and players to improve and compete is complemented by a really positive camaraderie.”