The All Blacks increased their advantage atop the World Rugby Rankings while South Africa replace Australia in the top four of the table.

New Zealand picked up from where they left off following last year’s procession to the Rugby Championship title with a 54-34 bonus-point victory over Australia that was even more emphatic than the scoreline suggests in the opening round of the 2017 competition.

The All Blacks produced a superb first-half of rugby and led 54-6 after 48 minutes before the Wallabies salvaged some pride by scoring four unanswered tries to take them to within 20 points at the end.

Rieko Ioane and Ryan Crotty both bagged a brace of tries apiece in a victory that will not only help offset the disappointment of the drawn series against the British and Irish Lions but also increase their cushion over England at the top of the World Rugby Rankings to more than five points.

Liam Squire, Sonny Bill Williams, Damian McKenzie and Ben Smith also scored tries as the All Blacks picked up 0.43 of a rating point to move on to 95.21 points.

Debutant Curtis Rona, Tevita Kuridrani, Kurtley Beale and Israel Folau all crossed for the home side, with Foley converting them all, but there was no disguising the gulf between the teams which, from a rankings perspective, is now exactly 11 points.

South Africa’s four-try, 37-15 win over Argentina in Port Elizabeth has resulted in the Springboks leapfrogging Australia into fourth place in the rankings. Meanwhile, Los Pumas drop one place to 10th with Fiji filling the vacancy in ninth to match their previous best position.

After a cagey opening in which Elton Jantjies landed two penalties for South Africa for a 6-0 lead at the end of the first quarter, the hosts finally found their stride to post four tries through Courtnall Skosan, Raymond Rhule, Siya Kolisi and Pieter-Steph du Toit.

Jantjies slotted a third penalty to add to his four conversions, while Argentina’s attack-minded approach brought them tries from Martin Landajo, who was the first player on either side to cross the whitewash, and Emiliano Boffelli.

South Africa now have 84.51 rating points, three-tenths more than the Wallabies, while Argentina are now a third of a point behind Fiji on 79.15 points. 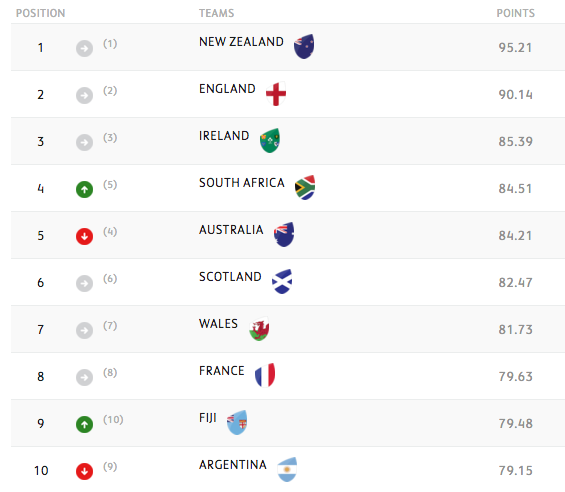 With thanks to World Rugby