South Africa returned to the victory trail when they secured a deserved 18-10 triumph over Australia in their Rugby Championship clash in Pretoria in Round 5.

An accomplished kicking display from Morne Steyn, who scored all his team's points, guided the home side to victory although the Wallabies scored the game's only try early in the first half when Scott Sio went over the whitewash.

The result means the Boks ended a three-match losing streak and they move above the Wallabies into second place in the standings.

Despite their win, there are still question marks about the Boks though as the Wallabies dominated the territorial stakes and spent large parts of the game in the home side's half.

Springbok head coach Allister Coetzee's decision to go with a six/two, forwards/backs split backfired on him as the Boks lost the services of Jesse Kriel in the first half as well as Bryan Habana and Rudy Paige early in the second half.

This meant that the Boks were forced to play with Jaco Kriel on the left wing during the game's final quarter. But to their credit, the Boks showed great character and a solid defensive effort in the second half secured them this result.

The home side's captain Adriaan Strauss deserves special praise as he led from the front in what was by far his best Test of the season. He was named the official man of the match.

The Boks made a bright start and after taking the ball through several phases with their forwards, Steyn opened the scoring with a well-taken drop goal in the fifth minute.

The Wallabies were soon level, however, when Bernard Foley landed a penalty after Eben Etzebeth was penalised for taking Sean McMahon out off the ball midway between the halfway line and South Africa's 22.

Five minutes later, Habana failed to find touch and Israel Folau launched a counter-attack from inside his 22. The ball went through several pairs of hands and the Wallabies were soon close to the home side's try-line.

Will Genia then threw a long pass to Sekope Kepu who did well to offload to his front row partner Sio,who went over under the posts for his first Test try.

Australia had a chance to increase their lead in the 23rd minute, when Vincent Koch was blown up for a scrum infringement midway between the halfway line and the visitors' 22, but Reece Hodge's monster effort landed just short of the cross-bar.

Three minutes later, Steyn narrowed the gap to four points with a penalty, after several Wallabies went off their feet at a ruck. South Africa were then handed a lifeline in the 35th minute when Folau was yellow carded for taking Habana out off the ball after  the Bok flyer had chipped ahead, close to the Wallabies' 22.

Steyn made no mistake with the subsequent place-kick which meant the game was evenly poised with score at 10-9 to the visitors. South Africa upped the ante on attack but couldn't round off their attacking chances but they regained the lead on the stroke of half-time when Steyn added his third penalty after Australia strayed offside on defence.

There wasn't much to report during the early exchanges in the second half although the Wallabies had two golden opportunities to take lead but Hodge missed two shots at goal in quick succession.

Steyn also had an opportunity to extend his side's lead on the hour mark but his penalty attempt, from 55 metres out, was also off target.

The rest of the half was a war of attrition as both sides tried to gain the ascendancy but although the Wallabies spent large parts of the half camped inside the Boks' half, they committed a plethora of handling handling errors which proved costly in the end.

Steyn scored the first points of the half in the 76th minute when he landed a penalty from close quarters after the Wallabies were penalised for a ruck infringement and the pivot sealed the result when he slotted his second drop goal in the game's closing stages. 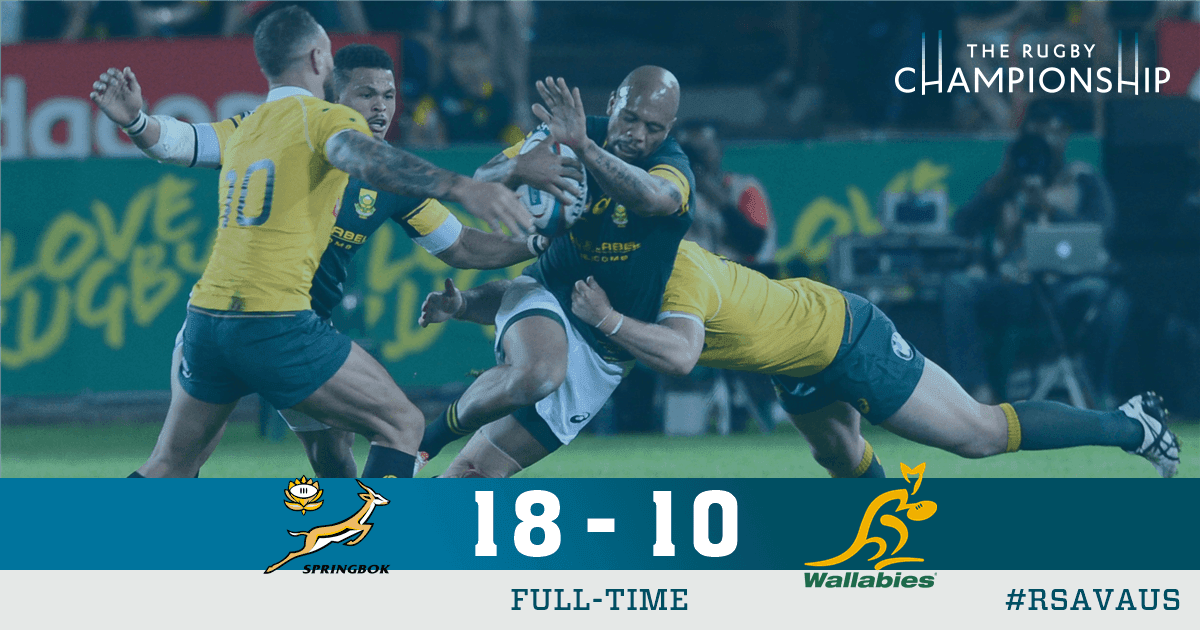