The Rugby Championship Adopts Bonus Point System and Heads to London

The Rugby Championship tournament in 2016 will therefore see the four-try bonus point replaced by a bonus point awarded to a team finishing three or more tries ahead of its opponent. The bonus point for losing by seven or fewer points remains unchanged.

SANZAAR has also announced the match schedule and kick-off times for The Rugby Championship that will include for the first time a match played at Twickenham Stadium on the 8th October 2016 between Argentina and 2015 Championship winners Australia. This is a nominated home match for Argentina that will play its other home matches in Salta and Buenos Aires.

The Twickenham match will be the final game of the Championship and could have a huge bearing on the outcome of the tournament. Argentina will be keen to reverse its loss to the Wallabies at the same venue in the 2015 Rugby World Cup semi-final.

The Rugby Championship will be played across six weekends/rounds and will also for the first time include a match at Mbombela Stadium, Nelspruit, South Africa.

SANZAAR CEO, Andy Marinos stated, “SANZAAR EXCO reviewed the bonus point system implemented into Super Rugby this year and believed it had a significant impact in rewarding the more dominant teams, created a competition for the full 80 minutes and is providing a reward system that recognises both attack and defence.”

“Having witnessed some of the most exciting and complete 80-minute games in the history of the competition this season, spurred on by the introduction of the new bonus point system, we believe that across the SANZAAR tournaments, for the sake of the players, broadcasters and the fans, we should have consistency in terms of the tournament points system.”

“We look forward to the continuation of similar, exciting and impactful rugby in the Test Matches of the 2016 Rugby Championship.”

“SANZAAR is also delighted to be playing in two new cities this year with Mbombela Stadium, Nelspruit and Twickenham in London hosting Championship matches,” added Marinos.

Competition points will be awarded in all matches on the following basis: 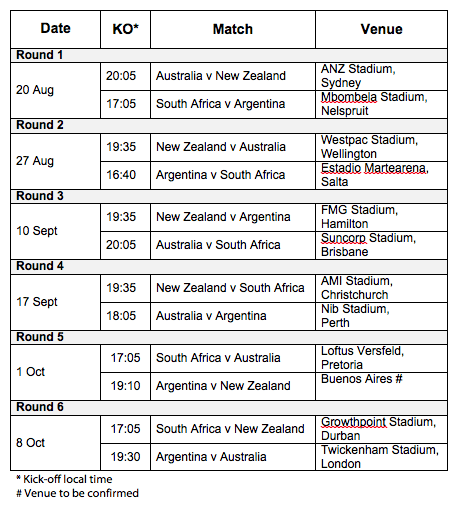