New Zealand got their Rugby Championship campaign off to a superb start when they claimed a 54-34 victory over Australia in Sydney.

In a fast-paced encounter, in which both sides stayed true to their attacking roots, the All Blacks' superior game management - especially in the first half - laid the groundwork to this win and they eventually outscored the Wallabies seven to four.

The world champions held a 40-6 lead at the interval courtesy of two tries apiece from Rieko Ioane and Ryan Crotty as well as further five-pointers from Liam Squire and Sonny Bill Williams.

Those 40 points were the most conceded by the Wallabies in the first half of a Test against the All Blacks.

There was plenty of ahead of this match after New Zealand teams won all 26 matches against their Australian counterparts in Super Rugby this year and the All Blacks' performance went a long way to justify that hype. They blew their hosts away with a clinical display during that first half although the Wallabies fought back bravely during the second half.

Australia were fastest out of the blocks and were soon camped inside New Zealand's 22 after taking the ball through 14 phases. The All Blacks strayed offside on defence and Bernard Foley opened the scoring in the fourth minute by slotting the resulting three-pointer from the kicking tee.

It did not take long for the world champions to strike back though and in the 10th minute, Squire rounded off after Beauden Barrett, Brodie Retallick and Kieran Read impressed with slick handling in the build-up.

Foley narrowed the gap to a point, when he added his second penalty in the 17th minute, but that was the last time the home side would score points during the half.

In the 18th minute, Ioane rounded Israel Folau with a superb turn of speed before crossing in the left-hand corner. The All Black flyer had his second try three minutes later after gathering a pass from Crotty, who intercepted a wayward Wallaby pass on the halfway line.

The ret of the half was a procession and tries from Williams and Crotty meant Steve Hansen's charges had their tails up as the teams changed sides at the interval.

New Zealand continued to dominate during the early stages of the second half and shortly after the restart Barrett intercepted a Folau pass before getting a pass out to Ioane just inside the Wallabies' half.

He still had work to do and after rounding one defender, he offloaded to Damian McKenzie who cantered in for his first Test try.

And five minutes later, Liam Squire set off on a barnstorming run which took him into the Wallabies' 22. He was eventually brought to ground, but after taking the ball through another couple of phases, Ben Smith dotted down next to the posts - Barrett's seventh conversion giving the All Blacks' a 54-6 lead.

To their credit, the Wallabies did not surrender and in the 51st minute Curtis Rona got over for a try on his Test debut after running onto a well-timed pass from Foley close to New Zealand's try-line.

With the game in the bag, the All Blacks rung the changes and it will be a concern for their coach, Steve Hansen, that the intensity levels dropped in his side after he brought on his replacements.

That try from Rona was followed by another five-pointer from Tevita Kuridrani, who barged over the whitewash after gathering a flat pass from Folau.

And on the hour-mark, TJ Perenara threw a loose pass 10 metres inside his half which Kurtley Beale gathered before outpacing the cover defence on his way over the try-line.

Folau eventually got his name onto the scoresheet in the 68th minute when he crossed for his side's fourth try after finding himself in space just outside the All Blacks' 22.

And although the Wallabies finished stronger, they know their first half performance left a lot to be desired and they will be determined to improve on that effort when these sides meet in Dunedin next weekend. 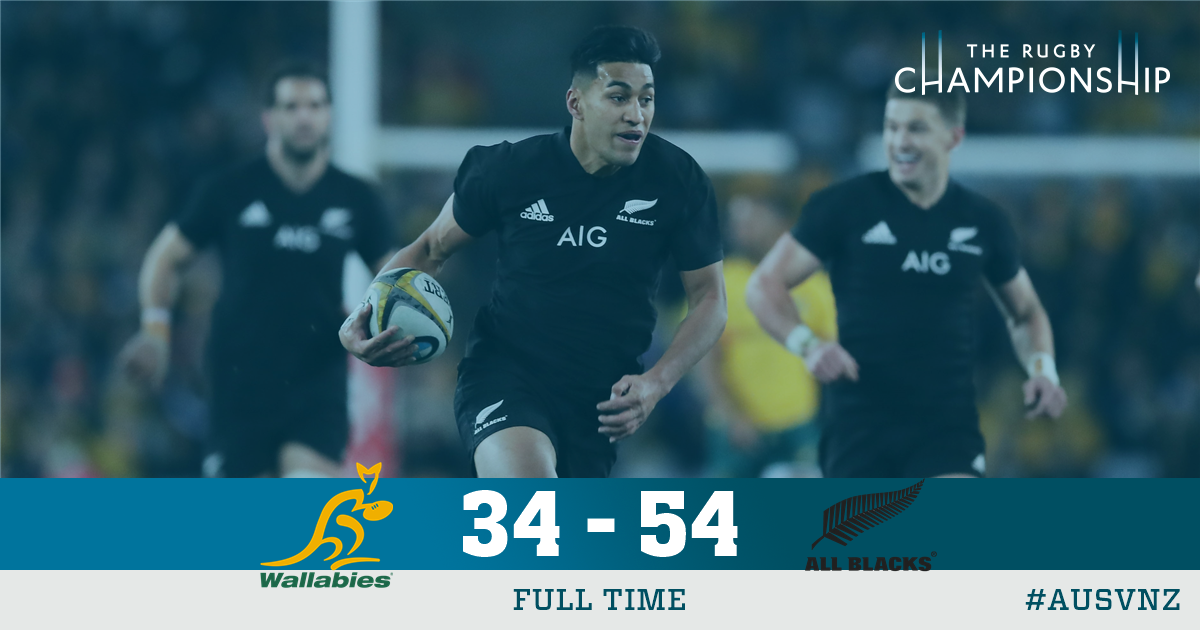