Highlanders mauled by the Sharks

The Sharks continued with their fine start to the Super Rugby season courtesy of a 42-20 victory over the Highlanders in Dunedin on Friday.

The Durban-based outfit were full value for their win as they held the upper hand for long periods and the result means they have now won their third successive match against the Highlanders.

They eventually outscored the home side battled by five tries to three with Makazole Mapimpi and Aphelele Fassi scoring a brace apiece. James Venter also crossed the whitewash and Curwin Bosch finished with a 17-point haul after slotting four conversions and three penalties.

For the Highlanders, who committed a plethora of unforced errors, Dillon Hunt, Jona Nareki and Michael Collins scored tries while Mitch Hunt succeeded with a penalty and a conversion.

The opening exchanges were tighlty contested and the sides were deadlocked at 3-3 by the 20th minute after Hunt and Bosch traded penalties. The match came alive five minutes later when Venter ran onto a pass from Kerron van Vuuren just outside the Highlanders’ 22 before racing away to score the opening try.

Bosch added the extras, which meant the visitors were leading 10-3 and they continued to dominate as the half progressed. The Durban-based outfit gave the ball plenty of air and were rewarded with Mapimpi’s tries shortly before half-time.

In the 35th minute, the Springbok flyer rounded of out wide after Aphelele Fassi and Sikumbuzo Notshe combined brilliantly in the build-up.

Five minutes later, Notshe was involved again when he pounced on a loose ball inside the Highlanders half but was stopped in his tracks close to the halfway line. He did well to get a backhanded pass out to Madosh Tambwe, who offloaded to Mapimpi and once again he crossed the whitewash.

Bosch converted both five-pointers which gave the Sharks a 27-3 lead at the interval, and he put more daylight between his side and their hosts when he slotted another penalty early in the second half.

The Highlanders needed a response and that came shortly afterwards when Hunt swivelled through two tackles before barging over under the posts. And on the hour-mark Nareki crossed for their second try after gathering a well-weighted crossfield kick from Hunt.

Despite upping the ante on attack, the Highlanders’ mistakes cost them dearly and in the 72nd minute a Rob Thompson knock on was booted ahead by Fassi. The full-back regathered before outpacing the cover defence on his way over the try-line.

The Highlanders struck back when Collins crossed for their third five-pointer two minutes later but Fassi sealed his side’s win when he glided through a gap in the home side’s defence before scoring his sides second try in the game’s closing stages. 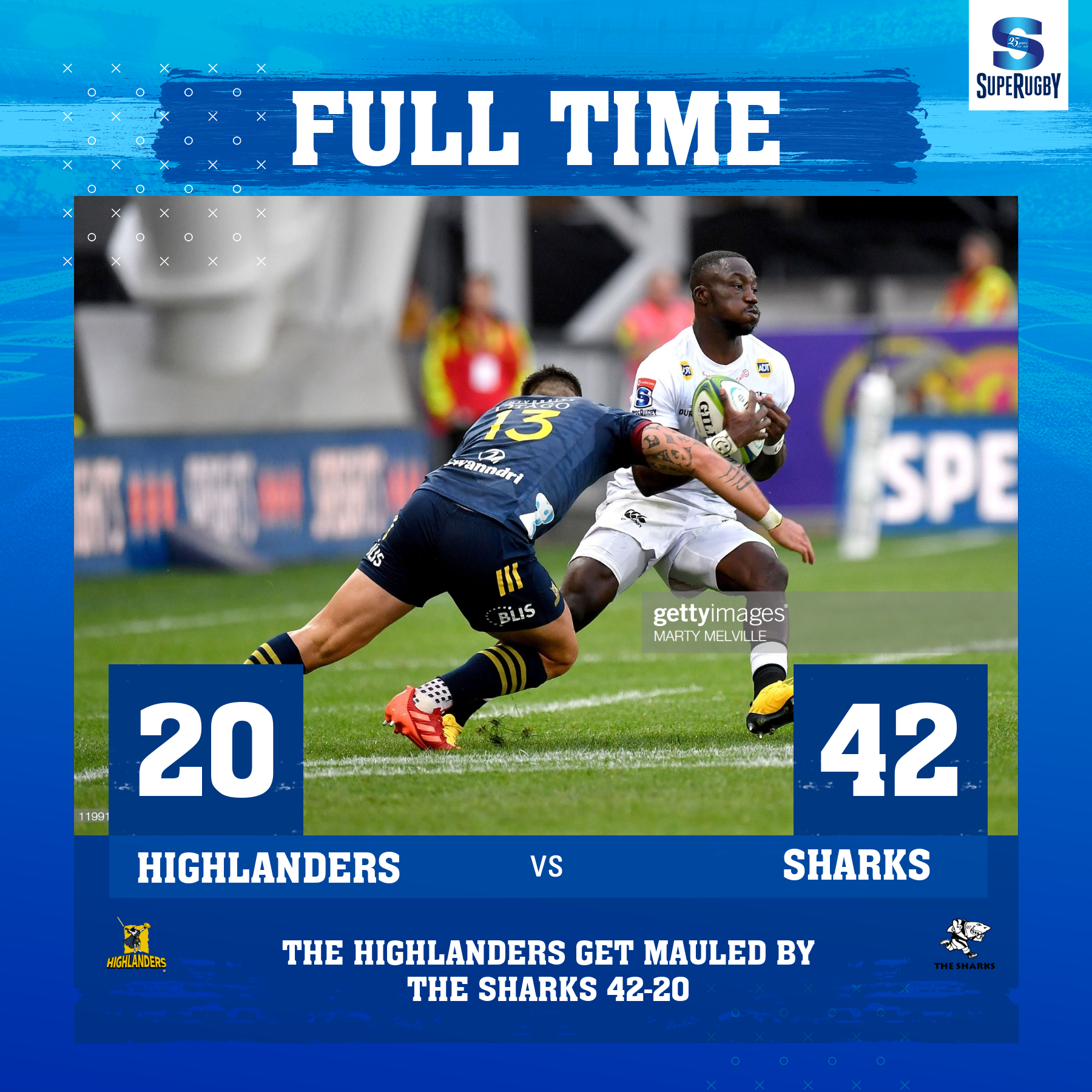