The Hurricanes advanced to the Super Rugby semi-finals after securing a hard-fought 35-28 victory over a spirited Bulls outfit in Wellington.

In a thrilling encounter played at a frenetic pace, both sides deserve credit for making this the entertaining spectacle that it was, with the result staying in the balance until the game’s dying moments when the Bulls were on the attack close to the Hurricanes’ try-line before losing possession.

For the Hurricanes, TJ Perenara, Ben Lam and Salesi Rayasi scored tries while Beauden Barrett kicked three conversions and a penalty, and Jordie Barrett also succeeded with a couple of three-pointers off the kicking tee.

Cornal Hendricks led the way for the Bulls with a brace of tries while Warrick Geland crossed the whitewash as well and they were also awarded a penalty try. Handre Pollard added three conversions.

Beauden Barrett opened the scoring with a penalty in the 11th minute before the Bulls struck back with Gelant’s try shortly afterwards. Jesse Kriel tore the Hurricanes defence to shreds with the initial line break before offloading to Gelant, who outpaced the cover defence on his way over the tryline.

Despite that setback, the Hurricanes soon took control of proceedings and struck back with tries from Perenara, Lam and Rayasi. Perenara’s effort came after he did well to gather a pass from Wes Goosen deep inside Bulls territory before dotting down.

Five minutes later, Beauden Barrett got a well-timed pass out to Lam, who slipped through a tackle from Rosko Specman before scoring his side’s second try.

Soon after, Rayasi got over for his first five-pointer when he caught the Bulls napping by bursting through a gap at a ruck just outside the visitors’ 22.

With a 24-7 lead, the Hurricanes seemed to be cruising, but the Bulls refused to surrender and struck back in the 34th minute when Hendricks beat Rayasi with a superb goose-step before crossing in the right-hand corner.

That try gave the Bulls hope as they narrowed the gap to 10 points by the half-time break after Pollard converted, but the Hurricanes were fastest out of the blocks after the interval. This, after the Springbok fly-half knocked on a Hurricanes kick midway between the halfway line and his 22, allowing the home side to pounce on his error by launching a counter attack that saw the ball go through several hands before Rayasi rounded off again.

That gave the Hurricanes a 29-14 lead but they were dealt a blow in the 52nd minute when the Bulls were awarded a penalty try after Rayasi knocked on a pass from Pollard close to the Hurricanes’ try-line.

The Canes replacement back was also yellow carded for his indiscretion and with the score 29-21 to the hosts, the Bulls were back in the match. A 56th minute penalty from Jordie Barrett extended the Hurricanes’ lead but the Bulls struck back when Hendricks crossed for his second try midway through the half.

That meant the Hurricanes were leading 32-28 but another Jordie Barrett penalty gave them some breathing space, and although the Bulls launched several attacks inside their opponents’ half, they could not break down the Hurricanes’ defence in the game’s closing stages. 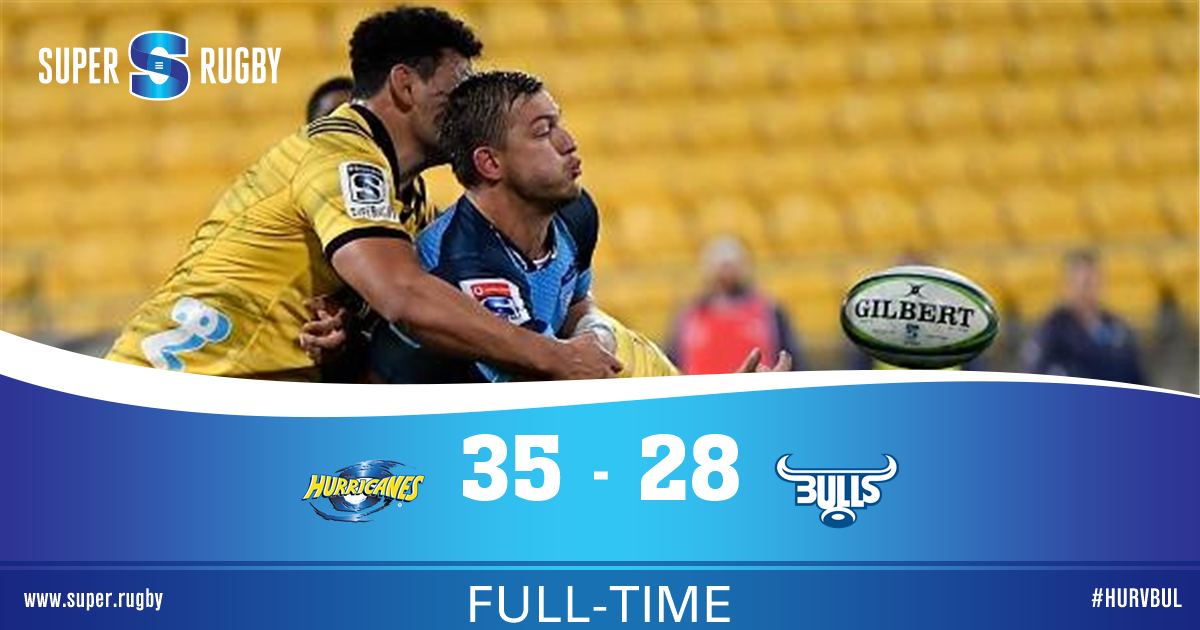