Hurricanes too strong for the Highlanders in Wellington

The Hurricanes got the job done but were made to graft for their 29-12 win over the Highlanders in their New Zealand derby in Wellington on Saturday.

In a tough and uncompromising encounter, the two sides went hammer and tongs at each other in a bid to secure victory but the Hurricanes finished stronger and eventually outscored their visitors four tries to two.

The result means the Hurricanes move into second position in the New Zealand Conference – behind the Crusaders – while the Highlanders, who were in first place before the start of the round, are now in joint third place with the Chiefs.

The Hurricanes drew first blood in the sixth minute when after a Highlanders attack close to the halfway line went awry.

This, after Rob Thompson stabbed a grubber kick through and Ben Smith gave chase. However, Smith was beaten to the ball by Beauden Barrett, who kicked ahead before regathering and with no one at the back for the visitors, the All Black fly-half raced away and dived over under the posts.

Lims Sopoaga failed with the conversion attempt, which meant the Hurricanes led 7-5, and although the rest of the half was a tight affair highlighted by resilient defensive efforts from both sides, the Hurricanes extended their lead shortly before half-time when Ben Lam crossed the whitewash.

This, after Ngani Laumape did well to draw in a couple of defenders with an angled run before offloading to Lam, who went over in the left-hand corner despite the attentions of Naholo and Ben Smith.

The Highlanders were fastest out of the blocks in the seond half and two minutes after the restart Naholo reacted quickest to a teasing grubber kick from Teihorangi Walden.

Naholo beat Julian Savea to the ball before kicking ahead and did well to regather before crossing the whitewash. Sopoaga added the extras which drew his side level but the Hurricanes regained the lead when Jordie Barrett slotted a penalty in the 50th minute after Tom Franklin was blown up for a late tackle.

The Hurricanes were slowly gaining the upper-hand and in the 65th minute Vince Aso and Jordie Barrett traded passes inside the Highlanders' 22 before Aso went over in the right-hand corner in spectacular fashion despite a desperate cover tackle from Ben Smith.

That score gave the home side more confidence and they sealed their win in the 73rd minute when Lam powered his way through a tackle deep inside the visitors' half before crashing over for his second try. 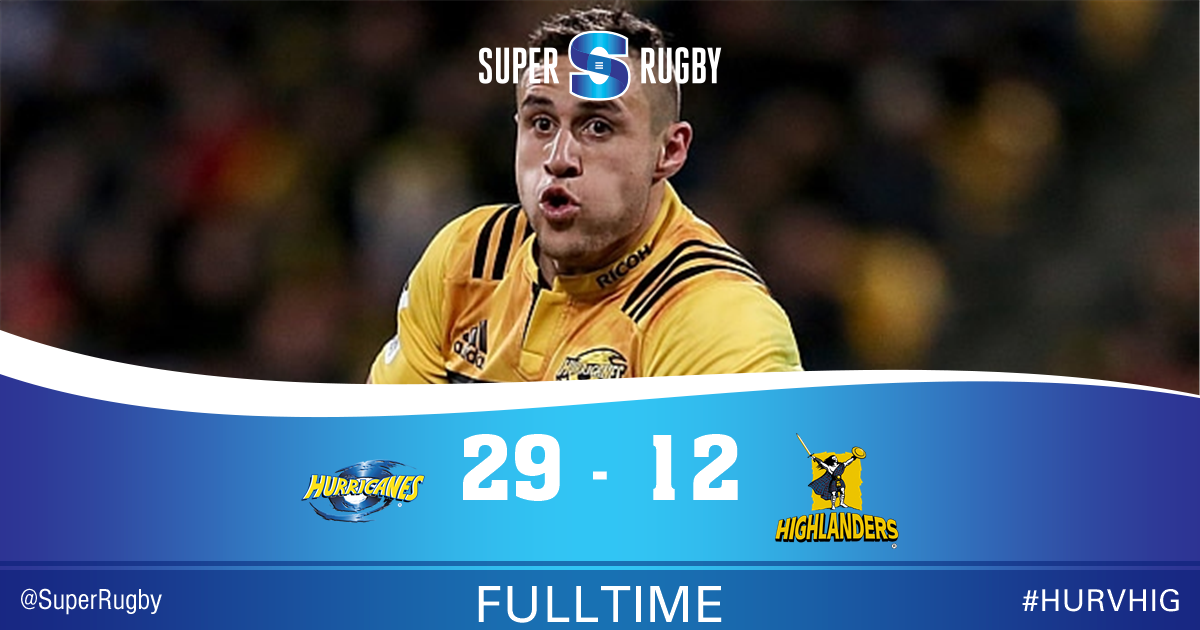 For Hurricanes: Tries: B Barrett, Lam 2, Aso