The Sharks missed the chance to put one foot in a home Semi Final as they were beaten 27-20 by the Cheetahs at Free State Stadium on Saturday.

Because of their narrow defeat, they now sit in third position behind the Crusaders, who are second on account of points difference (as both teams are deadlocked on 10 wins, which is the primary tie-breaking category).

However, the game wasn't without late drama as SP Marais was denied a try after the TMO showed Tonderai Chavhanga was bundled into touch.

The Cheetahs meanwhile move off the bottom of the table, going above the Rebels and staying in touch with the Lions who are two ahead of them.

Apart from wanting to get off the basement, the Cheetahs had pride to play for on Saturday and with plenty of the Sharks' first-team forward pack not starting due to their Springbok exploits, they pounced from a driving maul on eight minutes. It was a rampant set-piece from the home side too as Torsten van Jaarsveld ran over from the tail.

Johan Goosen's conversion to go with a third-minute penalty goal for an off-the-ball tackle from Dale Chadwick on Sarel Pretorius gave the Cheetahs an early 10-0 lead.

The Sharks desperately needed a foothold and it came in the nineteenth minute when Van Jaarsveld was caught offside, allowing Tim Swiel to open his account off the tee. It would be the start of a turnaround in fortunes for the next ten minutes as the visiting side took control.

The catalyst came from one of the Sharks' main threats as the pace of Cobus Reinach was too much for the Cheetahs as he raced over from halfway. Swiel was again on target as the extras made it a tied game in what was an entertaining first 23 minutes in Bloemfontein.

Swiel was successful again soon after when Cheetahs loosehead prop Trevor Nyakane was pinged for deliberately collapsing a maul that put the Sharks ahead for the first time.

TABLE: If you are a Waratahs, Crusaders or Highlanders fan just waking up, it's a very good morning! #SuperRugby pic.twitter.com/1xA4Ah7e5g

However the Cheetahs managed to bounce back off the ropes before the break when strong running led to Philip van der Walt reaching out for a score under the uprights. Goosen of course made no mistake to put his side 17-13 up and keep the Sharks third in the table.

That crucial standing which would leave the Sharks not having the possibility of a home semi in their own hands was even more likely in the 49th minute when the Cheetahs crossed again via Lood de Jager. It was deserved as the hosts showed greater intensity.

Cue Jake White sending on Bismarck du Plessis, Willem Alberts and Jannie du Plessis for the closing 30 minutes but instead of an eleven-point deficit to chase, another three points from Goosen on 56 minutes meant the Sharks were now looking at two scores just to level.

They got one when hooker Du Plessis scored a try similar to Van Jaarsveld's opener at the tail of a maul before that late Chavhanga moment left the Cheetahs relieved to cling on. 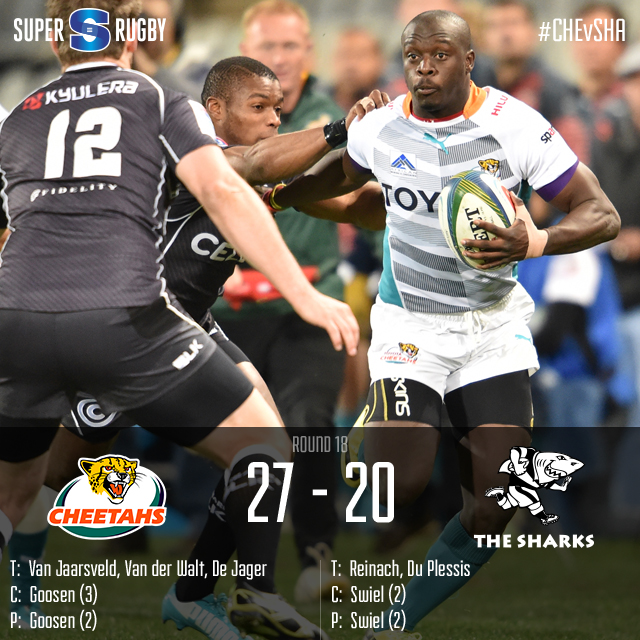