A 25-17 victory for the Cheetahs over the Stormers at Free State Stadium has thrown the South African Super Rugby Conference wide open.

The Stormers travelled to Bloemfontein hoping to cement their place at the top of the conference but defeat without a bonus point means they are now within striking distance of both the Bulls and Lions, who face off in the final game of Round 12.

The Cheetahs led from start to finish, outscoring their visitors three tries to two, but the Stormers will rue the wayward kicking of replacement fly-half Kurt Coleman, who missed four penalties in the second half.

The home side came out guns blazing and deservedly led 18-10 at the interval.

Quick-fire tries from Michael van der Spuy and Rayno Benjamin saw the hosts race to a 18-3 lead early on but Dillyn Leyds crossed before the break to keep the Stormers in touch as the teams swapped ends.

Duane Vermeulen scored for the Stormers in the second half but Clayton Blommetjies raced home late on to secure victory for the Cheetahs.

Cheetahs flyhalf Joe Pietersen opened the scoring from the kicking tee against his former team. The Stormers really should have replied soon thereafter, but Siya Kolisi had the ball ripped from his hands, having already crossed the tryline, by Benjamin.

Stormers flyhalf Demetri Catrakilis extended his amazing run to 26 consecutive successful shots at goal to briefly level matters but Schalk Burger gave away a penalty on the deck to allow Pietersen to put the hosts back in front at 6-3 at the end of the first quarter.

Another ex-Stormer then grabbed the first try as Van der Spuy pounced on a fumble by Kolisi to ghost home untouched.

Pietersen's extras gave the Cheetahs a 10-point lead which quickly turned into 15 as Benjamin showed great skills to kick ahead on the volley before using his pace to score in the corner.

Thanks to the Blue Army for your support.. Huge Victory #Boishaai #BHS #Cheetahs #Historical @superrugby @cheetahsrugby

The Stormers were right back in the game by the half-hour mark, though, as Burger and Vermeulen produced wonderful offloads to put Leyds over the corner. Once again, Catrakilis was on target with the conversion to cut the gap to eight.

Coleman took over from Catrakilis at the start of the second half but was not up to his team-mate's standard with his first shot at goal, missing a very kickable penalty.

The brute strength of Vermeulen saw the Stormers skipper power over from short range for his team's second try with Coleman's conversion making it a one-point game heading into the final quarter.

But the replacement flyhalf missed two more penalties to leave his side trailing with less than 12 minutes left on the clock.

Blommetjies sent the home crowd wild as he bust through the Stormers' defensive line in midfield to race home with Pietersen's conversion crucially keeping the Stormers beyond seven points.

Coleman had a chance to save a bonus point for his side at the death, but missed the target yet again. 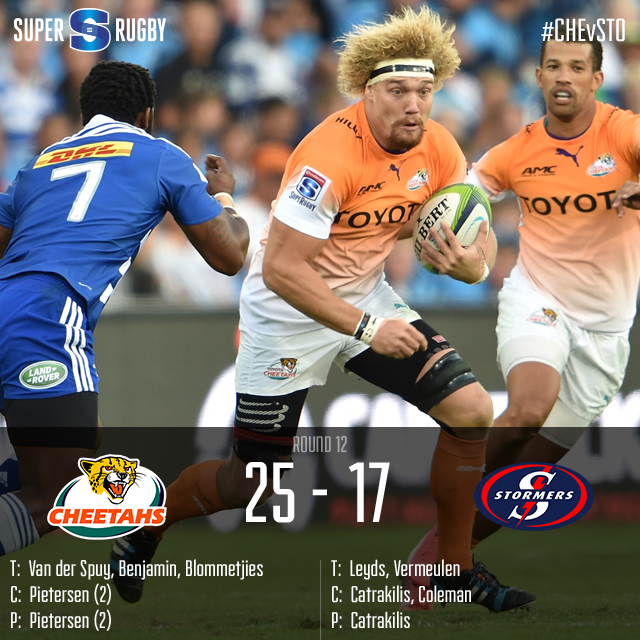