The Highlanders continued their push for a place in the Super Rugby Finals Series with a 45-24 demolition of the Cheetahs at Free State Stadium on Saturday.

In a one-sided affair that would have had fans in Bloemfentein shaking their heads in disbelief, the Highlanders ran in seven tries to move level with the Chiefs in second place in the New Zealand Conference.

Debutant wing Ryan Tongia scored twice in the first quarter while scrumhalf Aaron Smith bagged two of his own.

The visitors' handling skills were breath-taking as they clinically pounced on every opportunity on offer. They were ruthless.

For all the Highlanders' attacking brilliance, the Cheetahs were woeful, lacking any sort of intensity and making countless silly, unforced errors.

Just another rugby post big Congrats to @ryantongia on his debut tonight, topped it off with two tries. Always good to play with my boy @richard.buckman in the midfield #HesNotThatWhite #CrownMillBoys

The Highlanders had the four-try bonus point wrapped by before half-time as they ran their hosts ragged to lead 26-3 at the interval.

Having built up a 35-point lead, the Highlanders switched off, allowing the Cheetahs to reply with three tries in the space of six minutes in the final quarter.

It took just five minutes for Tongia to score his first try in Super Rugby as he collected Lima Sopoaga's cross-field kick to cross in the corner.

Tongia's second try was a real gem as he collected his own chip over Cheetahs fullback Clayton Blommetjies' head.

Aaron Smith's first try was even better as he showed incredible hands to collect an outrageous offload from Nasi Manu, who had gone on a rampaging run down the touchline.

Try number four was soon to follow as Patrick Osborne beat team-mate Malakai Fekitoa to Ben Smith's chip ahead to secure the bonus point inside the opening half hour.

Cheetahs wing Raymond Rhule was sent to the bin for taking Osborne out in the air early in the second half and the Highlanders made the numerical advantage count immediately as scrum-half Smith sniped into a gap from close range.

The Highlanders' sixth try was probably the best as flanker Gareth Evans rounded off a sweeping move started by Fekitoa from deep inside his own half with Ben Smith providing the link.

The Cheetahs finally got their act together in the last quarter as Willie Britz found Rayno Benjamin out wide for their first try.

Lock Carl Wegner barged over shortly thereafter before Francois Venter scored under the posts to cap a period of sustained pressure.

The Highlanders had the last laugh though as Ben Smith collected his own neat grubber ahead to score and seal an impressive win. 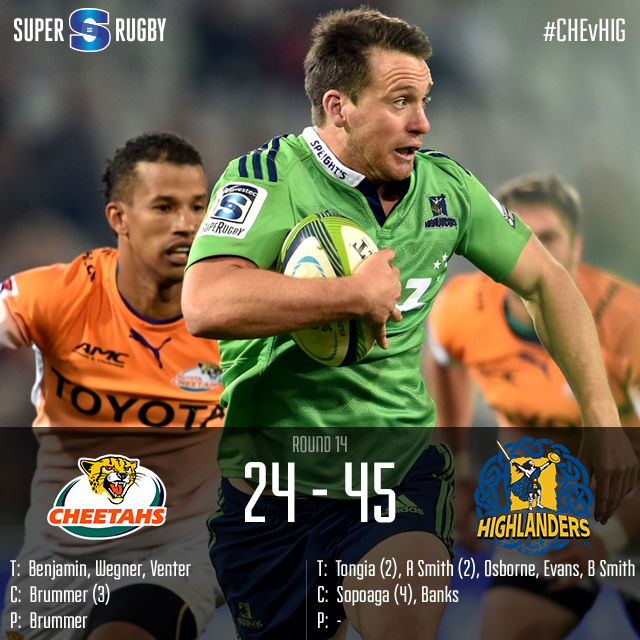