The Crusaders came from a 6-27 deficit to stage a remarkable second half comeback in Dunedin to beat the Highlanders 30-27 in Dunedin.

The game got off to a slow start but came alive after the first half-hour mark when Gareth Evans scored his side's first try of the match. After that the Highlanders trio of Aaron Smith, Lima Sopoaga and Waisake Naholo were the conductors in the symphony of fantastic, running rugby from the home side.

And up until the 66th minute it looked as though the Highlanders had it in the bag till the Crusaders sparked a revolution and overturned the status quo, and would score three tries through David Havili, Whetu Douglas and Seta Tamanivalu.

Their second home loss in a row means the Highlanders stay rooted to the bottom of the New Zealand conference but do claim a losing bonus point from the fixture. While the Crusaders jump the Blues for third place in the conference and sit on nine points.

Forsyth Barr Stadium became what you would expect the Colosseum was like in the height of the Roman empire. It was bloody and physical while the crowd roared with excitement with every whip-lashing collision.

After the first phase Highlanders flanker James Lentjes took a knock to the elbow which saw him go off the field with one minute on the clock which was the first taste of an intensely physical game between these two sides with casualties all over the pitch in the first 20 minutes.

The Crusaders drew first blood when the Highlanders were penalised which allowed Mitchell Hunt to take a shot at goal from 40 metres out, which he nailed and added the extras.

The visitors were eager to score as they created some exciting opportunities on the left wing but couldn't quite finish off the move with the Highlanders cover defence too well organised.

The Highlanders etched their first scribble on the score sheet after fly-half Sopoaga scored a penalty from 30 metres out equaling the scored 3-3. The prolific number 10 had another shot moments later but it fell by the wayside.

The home side then scored their first try of the season when they pulled a well-worked move that saw Waisake Naholo get the ball running at pace through the centre of the field before passing out wide to Gareth Evans to score with Sopoaga adding the extras. Moments late Hunt narrowed the gap with another penalty making the score line 10-6.

Naholo scored an incredible try on the 35th minute after the Highlanders had a scrum midfield. Aaron Smith grubbed the ball down field from the foot of the set-piece which Naholo collected and crossed the whitewash. The half ended 17-6 to the Highlanders.

The home side consolidated their lead in the second half when Sopoaga added another three points to the score board after the Crusaders were penalised behind their own 10 metre line.

Naholo then put his side into bonus-point territory after Sopoaga put in a fantastic chip over the Crusaders' defence which Malakai Fekitoa expertly plucked from mid air. He then sucked in the cover defence before popping inside to Naholo who ran 40 metres at full tilt to score.

The Crusaders almost crossed the whitewash 51 minutes in but their chance was expertly held up by Fekitoa
who wrapped his arms around the player and kept his hand under the ball, disqualifying the try. 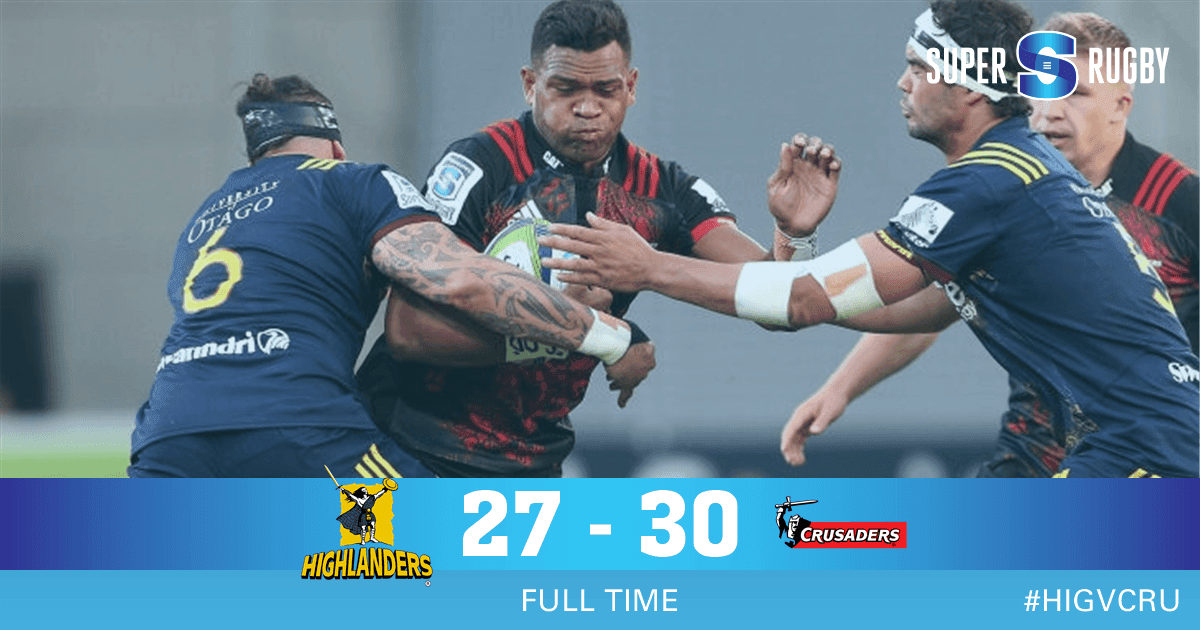 The visitors would get a try moments later though when the Crusaders were awarded a scrum on the Highlanders five metre line after Israel Dagg almost scored after an advantage. The Crusaders scrum proved to be too strong and in the process of pushing the Highlanders back, won themselves a penalty try.

As is if it had only struck them in the 60th minute, the Crusaders realised their forward pack was dominating the Highlander's in the collision area which they started to use to their advantage. They scored a try on the 66th minute when the visitors set up a maul midfield in the Highlanders 22 metre. The Crusaders went wide and David Havili scored in the corner.

The Highlanders' psychological hold on the game was all but lost after Fekitoa was sent off for the rest of the game when he was confused for Richard Buckman who was blown up for a high tackle. There was seven minutes left in the game with the Highlanders in the lead but all the momentum was with the visitors.

And their momentum finally percolated into points after the Crusaders scored their third try of the match
through Whetu Douglas in the 75th minute with replacement number 10 Marty McKenzie slotting the conversion making it a two point game with five minutes left to play.

It seemed as though there was only one team on the field, as the Crusaders crossed the line again when they set up a fantastic run up the right side of the field for Seta Tamanivalu to win his side a famous comeback victory.