The Sharks won their first game on tour when they pipped the Brumbies 27-22 in Canberra on Saturday.

Sharks outside centre Lukhanyo Am scored a last minute try to seal the win over the home side.

The Sharks controlled the possession statistics for the entire gamen the Brumbies did very well to stay in the game despite barely having any ball.

Tendai Mtawarira showed his significance in this young Sharks side. Whenever the Sharks looked confused as to where the ball should go, Mtawarira would take responsibility, taking the ball up eight times in the game.

With the win the Sharks jump to top of their conference with the Lions and the Jaguares yet to play. The Brumbies languish at fourth on the Australian Conference table but pick up a bonus point for their close efforts.

The Brumbies scored the first points and try of the game when they sent the ball wide and Wallaby winger Henry Speight dived over the line in the corner.

The Sharks launched a brilliant move moments later that saw Lambie swing it down field to Poitrenaud who took it up to the line and gave a clever under arm off load to Tera Mtembu. Unfortunately for the Sharks number eight, he had a foot out in touch.

The visitors would leave the Brumbies' half with points though as the Sharks were awarded a penalty and Patrick Lambie sent it through.

The Brumbies almost scored their second try after Joe Powell made a searing break straight through the middle of the Sharks defence. He was pulled down by the Sharks chasers but the Brumbies recycled quickly which led to Scott Fardy crashing over the line.

Referee Angus Gardner called the Brumbies back after the home side thought they had already scored for a knock on during movement for the line.

They would get their second try five minutes later when the Brumbies set up a well-worked maul and pushed the Sharks right over their touchline for hooker Josh Mann-Rea to dot down. Brumbies fly-half Wharenui Hawera scored his first points of the game with the extras.

Am was caught off sides 30 minutes in on his own five metre line which gave Hawera a gift of a shot at goals and made the score line 15-3.

Mtawarira scored his side's first try of the game when the Sharks used their powerful forwards to rumble up field before camping on the Brumbies line. Lwazi Mvovo came very close to scoring but the Beast would finish the move off. Lambie added the conversion as well as a penalty moments later making the score 15-13 to the Brumbies at half time.

Lambie claimed the lead in the 44th minute after a long spate of continuity from the Sharks was finally disrupted by handling error from Jean-Luc du Preez.

Luckily for the Durbanites the Brumbies were penalised at the breakdown. Lambie almost added another three after Hawera was caught holding onto the at the ruck. Lambie struck the ball from 48 metres out, and although he had the distance, the accuracy wasn't there.

The referee pulled out a yellow card on the 50 minute mark after Brumbies inside centre Kyle Godwin was caught offsides in a cynical fashion as the Sharks were about to score. The Brumbies did well to hold the Sharks out though as they repelled two five metre lineouts from the Durban side.

The Sharks finally used their utter monopoly on the possession and scored some points as Lambie kicked over another penalty, making the score 19-15 to the visitors. 65 minutes in Lambie extended their lead to 22-15 after another three pointer.

It looked as though the Sharks had the win in the bag as they were seven points up with minutes to play but Tevita Kuridrani had other ideas, and after a sustained siege on the Sharks line, the Wallaby outside centre was given the ball five metres out and crashed over. No one was going to stop him from there. Thompson slotted the conversion and suddenly it was a 22-all point game with five minutes to go.

A stalemate looked likely as the hooter sounded, but the Sharks played the ball up field to replacement full-back Curwin Bosch who grubbered the ball inside that looked like wasted possession before in-form Am collected the loose kick and handled it brilliantly to claim the try. 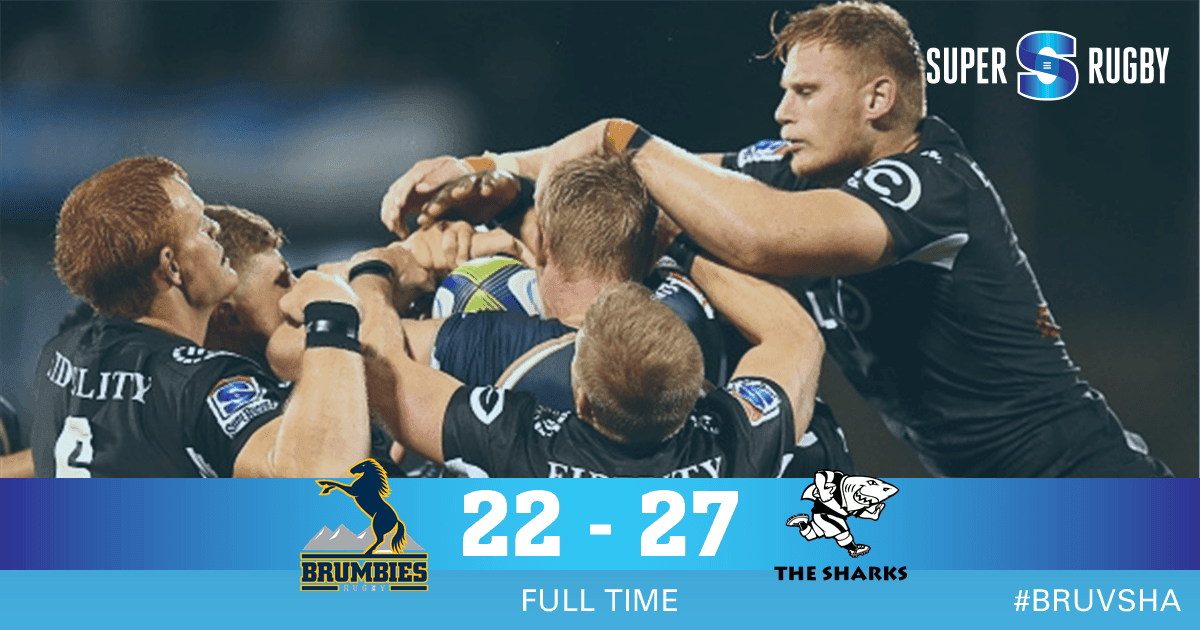 The Sharks now travel home to play the Waratahs while the Brumbies seek their first win of the competition when they host the Western Force.