The Lions made it two wins from two in Super Rugby this year as they thumped the Waratahs 55-36 with a bonus-point on Saturday.

Rob Horne, Michael Hooper, Bryce Hegarty, David McDuling and Israel Folau were the 'Tahs' try-scorers but they would leave an entertaining game with no points to their name. They head to the Sharks next week.

58 points were amassed in the first period as both teams did not hold back in an end-to-end clash, with eight tries scored in the 40 minutes.

The Lions snubbed an early kickable three points and instead went for the corner, with captain Whiteley going over off the back of a maul at the second time of asking. Elton Jantjies slotted the tough extras as the Lions moved into a 7-0 advantage with just five minutes played.

Credit to the Waratahs though, who had lost Nick Phipps and Will Skelton to injury before kick-off, as they responded with a well-worked score on the left as Horne finished off some good work from full-back Andrew Kellaway. The conversion levelled things up in Jo'burg.

It was tit for tat leading up to the 20 minute mark as again the driving maul proved profitable for the Lions, this time Ackermann crossing for 14-7 before the 'Tahs hit back again, with openside flank Hooper diving over to make it 14-14 thanks to Matt Lucas' nice delayed pass.

On 21 minutes the Lions had their third try as Janse van Rensburg enjoyed a free run to the line on the right, Jantjies making it 21-14.

And there was more to come from the Lions as three minutes later full-back Coetzee crossed for their fourth converted try as it became 28-14. Fortunately for the Waratahs the great work of hooker Tolu Latu on the ground gave Reece Robinson the chance to cut the gap to 11.

The Lions were now relentless with their kicks to the corner and it cost Sekope Kepu a yellow card as he infringed at the maul, with the penalty try question coming into the picture before scrum-half Cronje spotted space on the fringes and dived over the try-line for 33-17. 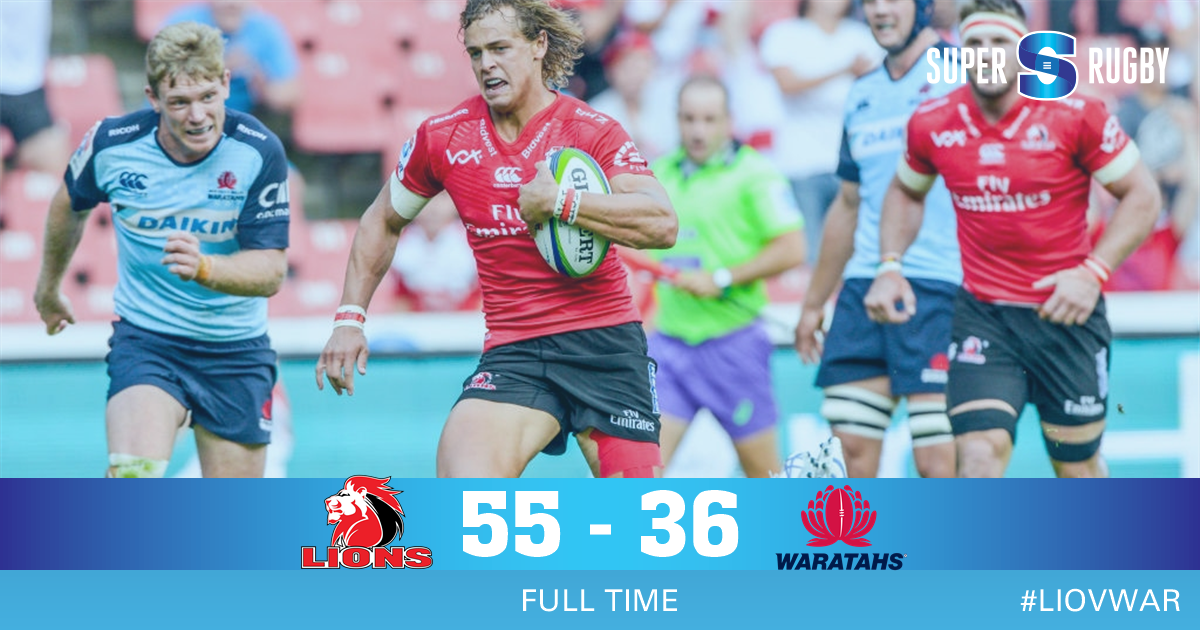 But yet again the Waratahs would not bow down as a lovely chip and regather from Hegarty meant they went into the break nine down.

The second-half was scoreless until the 50th minute but the Waratahs were the side that came closest, with Hegarty just beaten to the ball over the line by Courtnall Skosan. As it was, Jantjies decided to sit back in the pocket and landed a sweet drop-goal from 35 metres out.

That kick from Jantjies seemed to give the Lions a boost and when Janse van Rensburg was sent over by Kriel, the score was 43-24.

Hope, however, came for the 'Tahs when Lions lock Franco Mostert was yellow carded for a cynical offence close to his line, with McDuling powering over to cut the gap to 14 points. There was still 20 minutes to play as the high-scoring contest meant anything was possible.

The Lions seemed to put the result beyond doubt though on 65 minutes when replacement Mahuza ran over for an unconverted try. And with Mostert back on the field the Lions were hunting try number eight and it came 11 minutes later when Marx crashed over from the maul.

But there was still time for one more score for the Waratahs before the end as Folau's step around replacement Jaco van der Walt saw him go over, but it would do little to gloss over a disappointing game for the visitors.