A late try from SP Marais secured a 32-25 win for the Stormers over the Jaguares in a see-sawing contest at Newlands.

Both sides showed a willingness to run the ball from all areas of the field, especially during the first half, but like their opening fixture against the Bulls last week, the Stormers went off the boil in the second half which allowed the visitors to launch a fightback.

Two yellow cards in quick succession, inside the final quarter to Pablo Matera and Matias Moroni, meant the visitors were down to 13 during a crucial stage of the match, although they did not surrender and stayed in the contest until the final whistle.

The victory means the Stormers have now won their two opening matches and consolidates their position at the top of the Africa 1 Conference standings while the Jaguares are in joint second place with the Sharks on the Africa 2 Conference table.

The Stormers were fastest out of the blocks and spent most of the opening exchanges camped inside the Jaguares' 22.

But poor finishing meant they had nothing to show for their attacking endeavours during this period and it was the visitors who opened the scoring via a Nicolás Sanchez penalty in the seventh minute.

This came after Rynardt Elstadt was blown up for an early tackle on the Jaguares pivot.

Three minutes later, Jean-Luc du Plessis drew the hosts level with a penalty of his own when Leonardo Senatore infringed at a ruck, but the Jaguares stepped up a couple of gears on attack and were rewarded in the 16th minute when their captain, Agustín Creevy, barged over from a maul deep inside the Stormers' 22.

It did not take long for the hosts to respond, however, and the Newlands faithful were celebrating in the 23rd minute when EW Viljoen rounded off under the posts after Dillyn Leyds and Jano Vermaak did well in the build-up.

Du Plessis added the extras and two minutes later, he slotted his second conversion - from close to the touchline - after Bongi Mbonambi burst through a ruck before delivering a well-timed pass to Vermaak who went over in the left-hand corner.

The rest of the half saw plenty of thrilling action as both sides gave the ball plenty of air but a Sánchez penalty on the stroke of half-time was the only points during this period.

This meant the home side held a slender 17-11 lead at the interval and soon after the restart Du Plessis added his second penalty after Creevy was blown up for playing the ball on the ground.

Sánchez had a chance to reduce the deficit in the 48th minute after JC Janse van Rensburg infringed at a ruck but his shot at goal was off target. 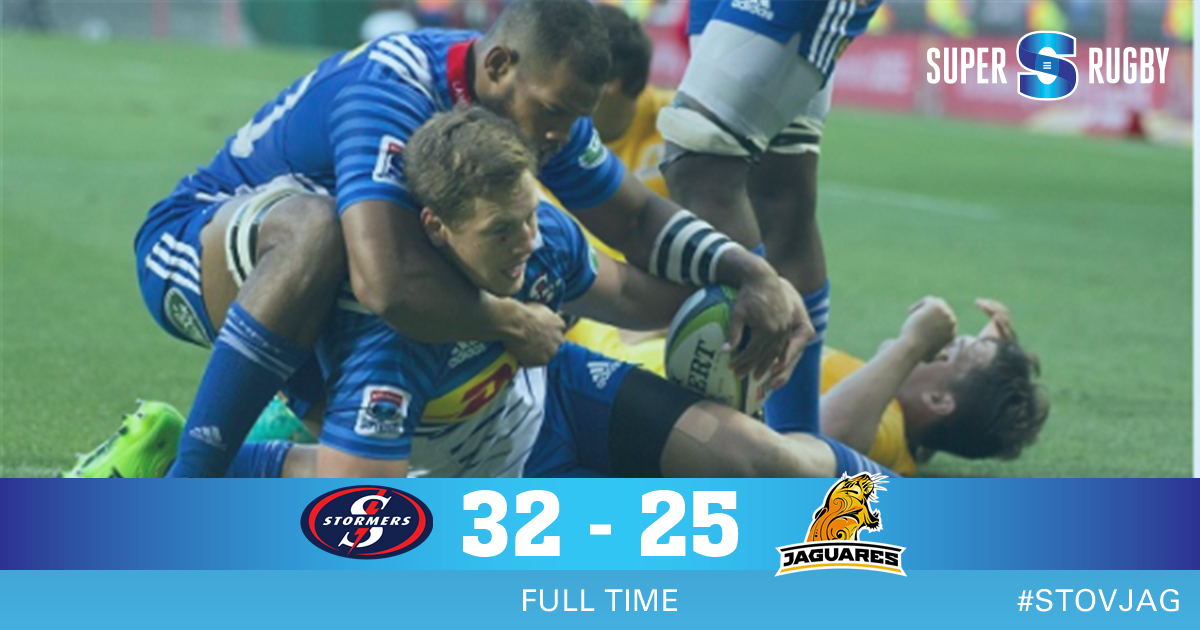 The visitors put that setback behind them and after an extended period inside the Stormers' 22, Santiago Cordero went over for their second try and Sánchez's conversion meant the hosts held a slender lead with just under 30 minutes left to play.

Shortly after Moroni's exit, the hosts were awarded a penalty try when the Jaguares pack collapsed a scrum in cynical fashion close to their try-line.

Despite playing with 13 men, the visitors stayed true to their attacking roots and in the 67th minute Cordero crossed for his second try after Tomás Lezana launched a brilliant counter-attack in the build-up.

Once again, Sanchez slotted a difficult conversion which meant the home side led 27-25 as the clock wound down.

The Stormers were soon camped inside the Jaguares' 22 and sealed victory in the 72nd minute when Marais crossed the whitewash after the ball went through several pairs of hands in the build-up.