The Chiefs overcame an indisciplined Chiefs side and the Hamilton deluge to win 26-18 on Friday.

It was disastrous conditions in the first half as both teams battled to get a decent string of moves together in the rain after knock ons and handling errors marred the day. But the Chiefs stamped their dominance early on after first half tries from Brodie Retallick and Toni Pulu, with the boot of Damian McKenzie keeping them in the game. The Hurricanes' cause was blown when both flanker Ardie Savea and second-rower Michael Fatialofa were given yellow cards that overlapped.

With the win the Chiefs go top of the New Zealand conference after to 14 points while the Hurricanes take second place with the rest of the New Zealand sides still to play on 10 points after the Chiefs took the losing bonus point away from them in the final minute through a penalty from McKenzie.

It was interesting clash with the amount of All Black match ups taking place as Beauden Barrett took on Aaron Cruden, TJ Perenara versus Tawera Kerr-Barlow and McKenzie versus Nehe Milner-Skudder.

It was as a slow start to the game as neither side could get any points of the board for the first ten minutes, as both seemed shocked at the state of the weather on the day.

Beauden Barrett scored the first points of the game when the Chiefs were penalised at the breakdown and finally after 14 minutes there were some points on the board.

After several waves of Chiefs drives towards the Hurricanes line, Ardie Savea was yellow carded for infringing at the maul as Chiefs hooker Hika Elliot was about to dot down. The home side took advantage of having the extra man and after sustained pressure on the Hurricanes line Brodie Retallick barged over the whitewash with Damian McKenzie adding the extras.

Moments later the Hurricanes closed the gap when Barrett kicked over another penalty making the score 7-6 to the home side.

The Hurricanes then picked up their second yellow card when Hurricanes lock Michael Fatialofa punched the ball out of mid-air and the referee immediately called off play and gave Fatialofa a yellow card. It was more bad news for the Hurricanes as McKenzie kicked through another penalty widening the gap to four points.

The Chiefs added to their lead just before the end of the first half to score their second try. The home
side had a scrum on the Hurricanes 10 metre line which scrum-half Tawera Kerr-Barlow used well by running on the blind side with ball in hand before chipping behind the Hurricanes' defence for winger Toni Pulu to chase. Pulu did so with aplomb and grounded the ball with his chest. McKenzie's conversion made the half-time score 17-6.

After the rain seemed to have subsided over the half-time break the game opened up more in the second half with the most of the momentum behind the Chiefs as they pressured the Hurricanes defence, and a try looked eminent before one of the Canes' front-rowers plucked the ball out of the air for the interception.

After the away side set up a few defensive rucks they were awarded a penalty and kicked for touch after a scintillating period of rugby.

The Chiefs, still had all the cards though as McKenzie slotted another penalty to extend his side's lead.

The Hurricanes finally scored a try of their own when they were awarded a penalty in the Chiefs 22 metre and kicked for line. After a strong maul that took them straight up to the Chiefs tryline, Perenara was able to push some bigger men over to score his side's first try.

Most of the excitement came in the last two minutes of the fixture. On the 78th minute Michael Leitch was yellow carded for a dangerous tackle which meant he could go and get an early shower.

The Hurricanes used the advantage well and decided to spread the ball quickly to their outside men, with Julian Savea finding himself alone on the wing with the cover defence bearing down on him. He has scored in far more trying circumstances though and gassed the defenders for the line.

It looked as though the Hurricanes had won themselves a bonus point after being within seven points of their winners but McKenzie used a last-gasp penalty to remove them from losing-bonus point territory. 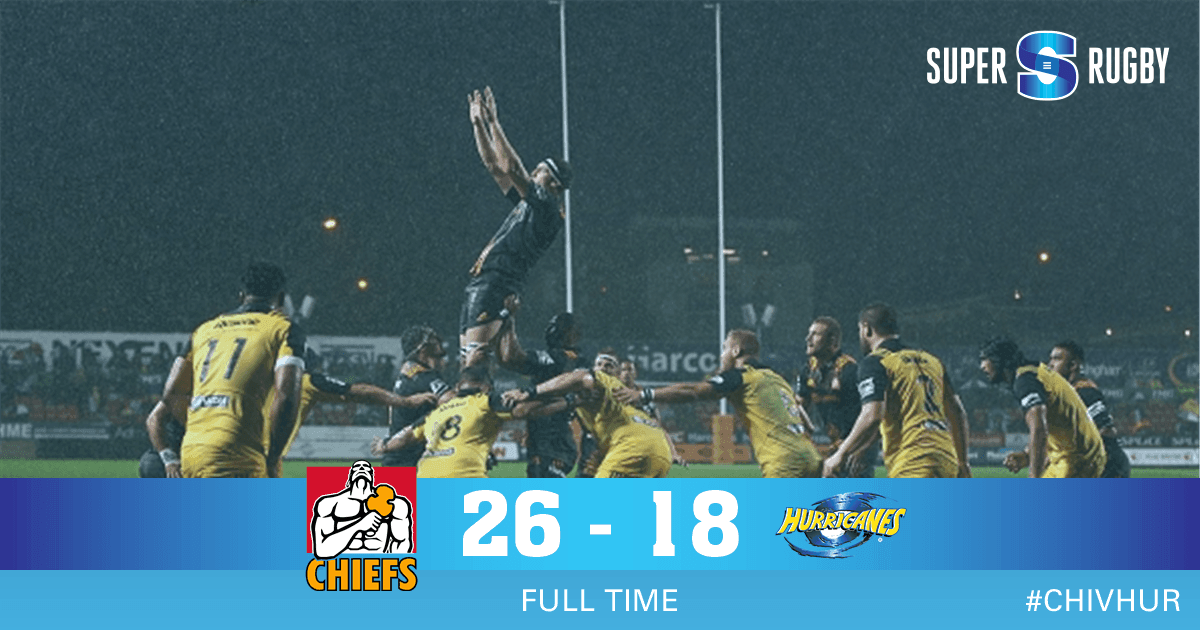