The Jaguares produced a complete performance to overcome the Lions 36-24 in Buenos Aires on Saturday.

The Jaguares scored four five-pointers through Joaquín Tuculet, Ramiro Moyano, Jeronimo De La Fuente and Sánchez, while the Lions managed four of their own through Warren Whiteley, Jacques Van Rooyen and Malcolm Marx, with Whiteley grabbing a brace.

The win means that the Jaguares tie with the Lions at the top of the Africa 2 Conference with nine points.

The Lions sent a borderline ‘B’ team to Argentina after resting some star players this weekend with Elton Jantjies, Franco Mostert, Lionel Mapoe and Rohan Janse van Rensburg all missing the trip. Jantjies’s wife was giving birth while Janse van Rensburg missed the trip to attend the funeral of his mother.

The Jaguares opened the scoring when full-back Joaquín Tuculet scored a try. Tomás Lezana created the chance with a well-weighted pass and Tuculet took it over the line for the Jaguares to take an early lead.

The Lions responded quickly though as the away side took the ball up to the Jaguares’ line before Cronje gave a short hanging pass to Whiteley to run onto to score, with Shaun Reynolds adding the extras. The Jaguares didn’t take the Lions’ response lightly though and would score four minutes later after rookie wing Moyano scored in the corner after showing some serious pace.

Things got worse for the Lions after Andries Ferreira was then yellow carded after being pinged for a high tackle.

The mercurial boot of Sánchez kept the scoreboard ticking in side’s favour after scoring two penalties later on in the half making it 21-7.

The Jaguares gave away a penalty before the end of the half after Sánchez chipped the ball over the defence which Anthony Volmink collected brilliantly.

The fly-half misjudged the kick and jumped straight into Volmink with both players hitting the floor and writhing in agony. It was arguably a yellow card but the referee deemed it a penalty. Reynolds missed the kick at the posts.

The score stayed 21-7 going into the second half with the Jaguares’ experience and physicality outmatching the Lions.

After the break Lions’ flanker Cyle Brink gave away a penalty and the Jaguares opted to kick with Sánchez slotting it to take the score to 24-7.

The Lions then scored a try after Reynolds had a penalty after a no-arm tackle from the Jaguares number ten. The Lions fly-half used the kick well by landing it into the Jaguares five-metre territory. Jacques van Rooyen then got over the line after a strong drive from the Lions.

De la Fuente scored for the Jaguares after the South Americans put in a tough shift to make it right to the Lions’ five-metre line to score their third try after he was given a short pass and skirted passed the Lions’ defence to score. His five pointer was followed by further bad news for the Lions after Robbie Coetzee was given a yellow card for a high tackle.

The Jaguares used the one-man advantage well as after a fast attacking movement downfield, they ended with Sánchez adding to his personal tally with a try and another conversion.

The Jaguares run of luck had a hiccup when they were set back by the yellow carding of Lezana in the 73rd minute which means he would be out for the rest of the game.

Just afterwards Marx scored a try after a great driving maul from the Lions. Minutes later the Lions would close the gap again after utilising another fantastic maul to drive the Jaguares back over their own line for Whiteley to grab his second score, albeit a consolation effort. 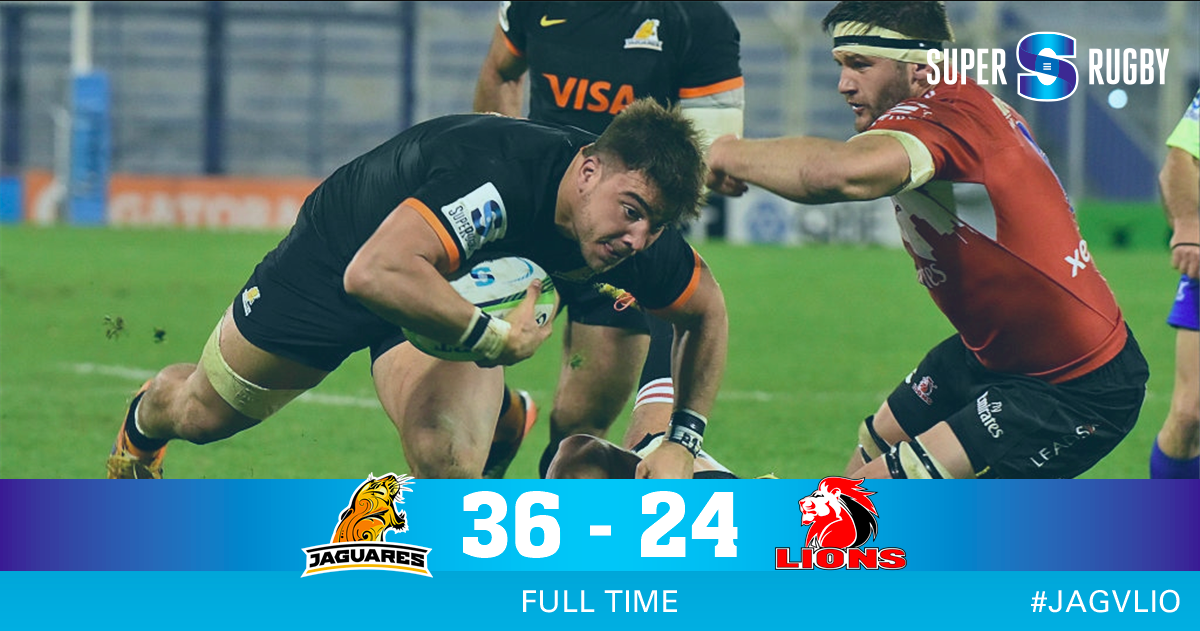