The Chiefs retained their unbeaten status when they claimed a hard-fought 27-14 win over the Rebels in Melbourne on Friday.

In a tightly contested encounter, the visitors had to dig deep to secure the win but they eventually took control of proceedings and outscored the Rebels by four tries to one.

The win means the men from Hamilton return to the top of the New Conference while the Rebels are still languishing at the bottom of the Australian Conference without any points from three matches.

In a closely contested affair, the home side - who conceded 50 points in each of their two previous matches against the Blues and Hurricanes - delivered their best performance of the season and held the lead for large periods.

They ran out of steam in the game's latter stages, however, and two late tries from Sam Cane and Shaun Stevenson secured the visitors a try-scoring bonus-point.

The opening half was characterised by several handling errrors from both sides and both Chiefs goalkicker Damian McKenzie and Reece Hodge of the Rebels missed shots at goal which would have given their side the lead in the opening quarter.

The visitors eventually took the lead, albeit in bizarre fashion when Dominic Bird dotted down after scooping up a loose ball close to the Rebels' try-line.

This, after Solomon Alaimalo laid the grounwork with a superb run down the left-hand touchline in the build-up. Three minutes later, the Chiefs thought they had increased their lead when Stevenson crossed the whitewash but television replays revealed that he stepped into touch in the build-up.

The Chiefs suffered a setback in the 28th minute when Liam Messam was sent to the sin bin for a cynical foul on defence deep inside his half. Jackson Garden-Bachop slotted the resulting penalty which meant the men from Hamilton held a slender 7-3 lead at half-time.

The Rebels made a superb start to the second half when, three minutes after the restart, Garden-Bachop glided through a gap in the Chiefs defence before throwing a splendid long pass to Marika Koroibete, who dived over in the left-hand corner.

The Rebels increased their lead 10 minutes later courtesy of another Garden-Bachop and they received a shot in the arm shortly afterwards when Alaimalo was yellow-card for a tip-tackle on Sefa Naivalu.

The home side did not exploit their numerical advantage, however, and the Chiefs did well to soak up the pressure on defence during this period. The visitors upped the ante on attack when Alaimalo returned from his spell on the sidelines and were rewarded in the 66th minute when Brodie Retallick barged over from close quarters.

Damian McKenzie's successful conversion meant they now held a three-point lead but the Rebels drew level when Garden-Bachop slotted his third penalty in the 70th minute.

The Chiefs finished stronger, however, made sure of the win when Cane dotted down after showing great leg strength in the build-up in the 77th minute.

Despite having the game in the bag, the visitors did not stop playing and secured the bonus point when Steven rounded off a flowing move in injury time. 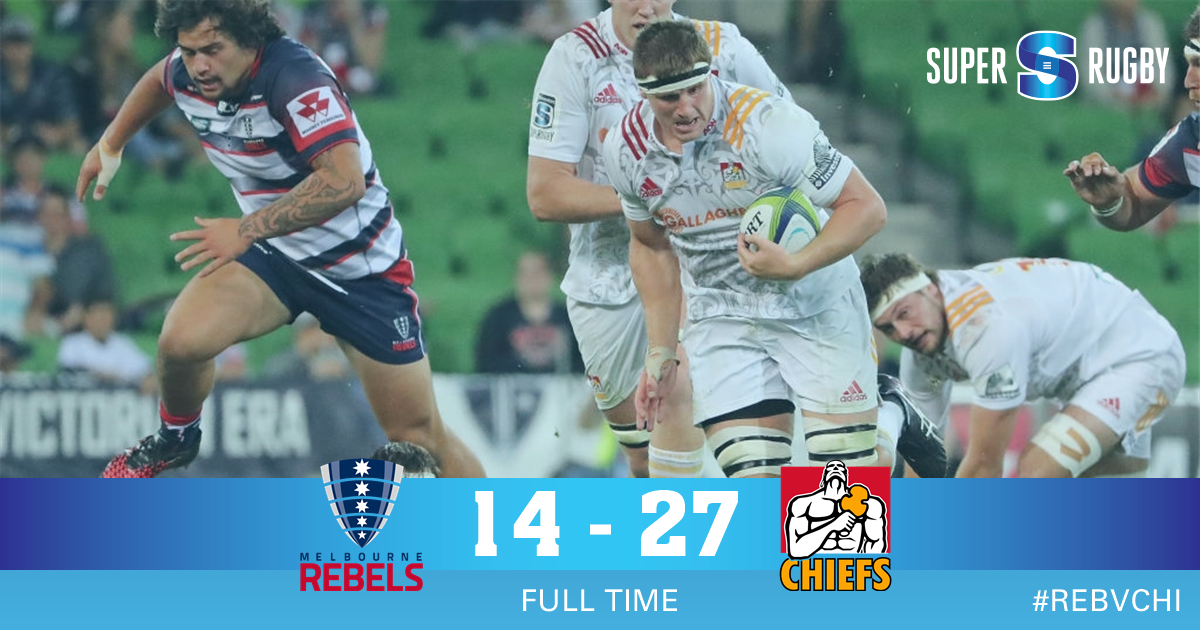