The Brumbies produced a late surge to score two late tries to win 28-12 against the Waratahs in Sydney on Saturday.

In what was largely an uneventful game to say the least but the Brumbies managed to score two late tries to break a seven-all deadlock that stood since the 28th minute. Tries from Robbie Abel and two from Henry Speight led the Brumbies to the important away win.

The Brumbies lead the way in the Australian Conference after the victory as they now go to 11 points. The Waratahs' miseries continue and languish at fourth in the Conference after only one win in Round 1.

It wasn't the return home the Waratahs were expecting after two straight losses on the road in South Africa. They have now lost three out of four game and sit at 16 on the combined table.

It was a big game on the Australian rugby calendar as the traditionally strongest Australian teams faced off against each other with many players trying to get one over each for their Wallaby competition. There were a few match ups with Ben Alexander and Sekope Kepu facing off in the scrums and Kuridrani taking on Israel Folau to name a few.

It was a quiet first half as both teams battled for supremacy without making much headway. They both tried to play expansive rugby but because of wet conditions it turned out to be a messy affair.

An early Scott Fardy yellow card set the Brumbies back. The Leinster-bound loose-forward was penalised by referee Glen Jackson for collapsing a maul. The Waratahs used the advantage well as Tom Robertson went over for the try after a strong showing from the Waratahs forwards to battle the Brumbies back.

The away side responded in the 27th minute when they drove up the midfield through some forward dominance before sending it wide for Kuridrani to slide over the line between the sticks. Brumbies fly-half Wharenui Hawera added the extras and the game was all tied up at 7-7.

It took until the 60 minute mark for the scores to change when the Brumbies won a penalty for obstruction in the line out, where Jed Holloway was penalised. They found touch five metres out, won the line out and mauled forward. The Brumbies replacement hooker Abel then charged over the line for the try.

They then compounded their lead after scrum-half Joe Powell used a box kick and chipped it over the Waratahs defence. It was perfectly weighted and Speight was lucky the bounce favoured him as he collected before grubbering it forward and dotted down for his side's third try.

The Waratahs replied almost immediately when Folau found the gap and off loaded well and Gordon away for the try but Reece Robinson missed the conversion which looked as though it might be costly if the home side were to fight for a comeback.

Speight nabbed his second try when his side won a line-out close to the Waratahs line and Speight drove forward, found a gap and ran all the way to score under the posts.

It wasn't a pretty game but the wet weather definitely made it difficult for the teams. The Brumbies showed perseverance to come back in the final 20 minutes to break the deadlock. 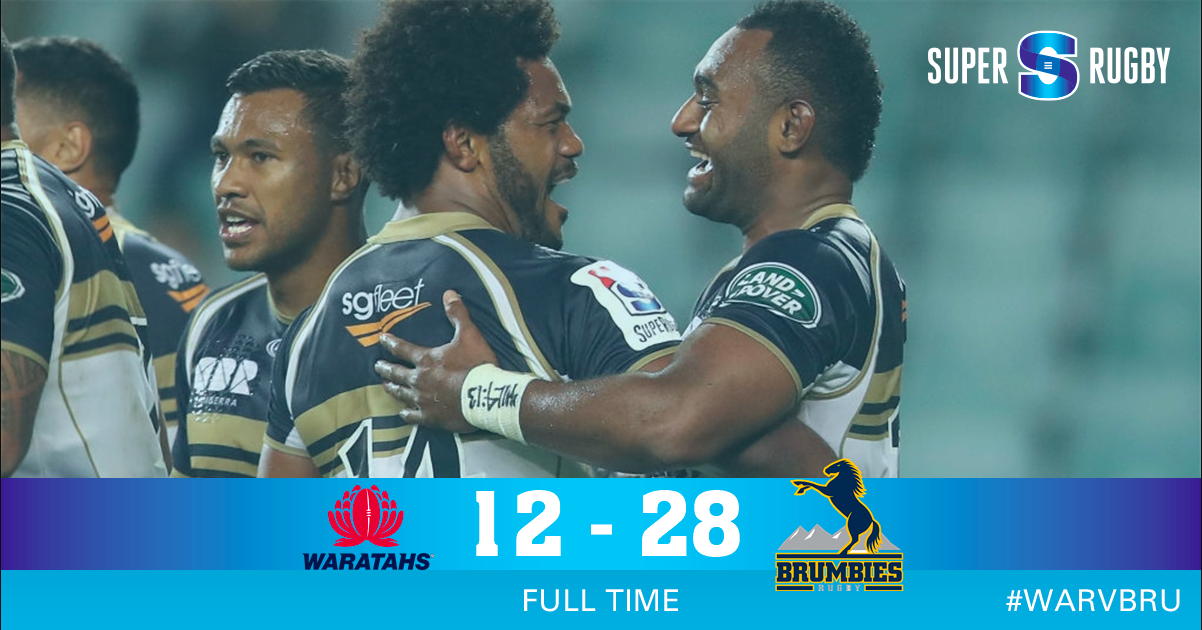