The Lions returned to the victory trail when they claimed a deserved 44-14 victory over the Reds in Johannesburg.

The home side dominated most facets of play and outscored their visitors by six tries to none, with Courtnall Skosan finishing with a 20-point haul after scoring four tries.

As the scoreline suggests, the Reds were under the cosh for large periods, although they suffered a major setback early in the second half when Quade Cooper was red carded for a high tackle.

The result puts the Lions' campaign back on track - after last weekend's away loss to the Jaguares - and this win moves them provisionally top of the Africa 2 Conference standings although that situation could change as the Sharks and Jaguares are still to play in Durban and Buenos Aires respectively, later on Saturday.

Meanwhile, the Reds are still second in the Australian Conference despite losing three out of four matches so far this season.

The match started at a frenetic pace with the teams running the ball from all areas of the field but they had little to show for their enterprising efforts during the early exchanges.

The Lions came close to opening the scoring in the 12th minute, when Jaco Kriel went over the whitewash after running onto a pass from Rohan Janse van Rensburg, but the Springbok flanker was held up by a desperate tackle from Izaia Perese.

Five minutes later, Elton Jantjies put Van Rensburg in the clear with a delightful offload. The burly centre soon found himself inside the Reds' 22 before delivering an inside pass to Courtnall Skosan, who went over under the posts.

Jantjies converted and although the home side were slowly gaining control of proceedings, they were still committing too many errors on attack.

In the 26th minute, Kriel went over the whitewash again and although he dotted down this time, his effort was ruled out after Ruan Ackermann knocked on in the build-up.

On the half-hour mark, the Reds suffered when their captain, James Slipper, was forced off the field after he sustained a leg injury in innocuous fashion when trying to lift a jumper at a lineout.

He was replaced by Markus Vanzat but the Wallaby's presence was missed during the rest of the match, particularly in the scrums as the Reds were pushed off the ball at the set-piece on several occasions.

A Jantjies penalty in the 32nd minute gave the hosts a 10-0 lead and Kriel eventually got his name on the scoreboard shortly before half-time when he barged over from a lineout drive close to the Reds' try-line.

That try meant the Lions led 15-0 at the interval but things went pear-shaped for the visitors early in the second half when Eto Nabuli and Cooper were sent off shortly after each other.

Nabuli was yellow carded for playing the ball on the ground at a ruck close to his try-line in the 44th minute and two minutes later, Cooper received his marching orders for a tackle with a swinging arm around the neck of Janse van Rensburg while the Lions centre was crossing for his side's fourth try. 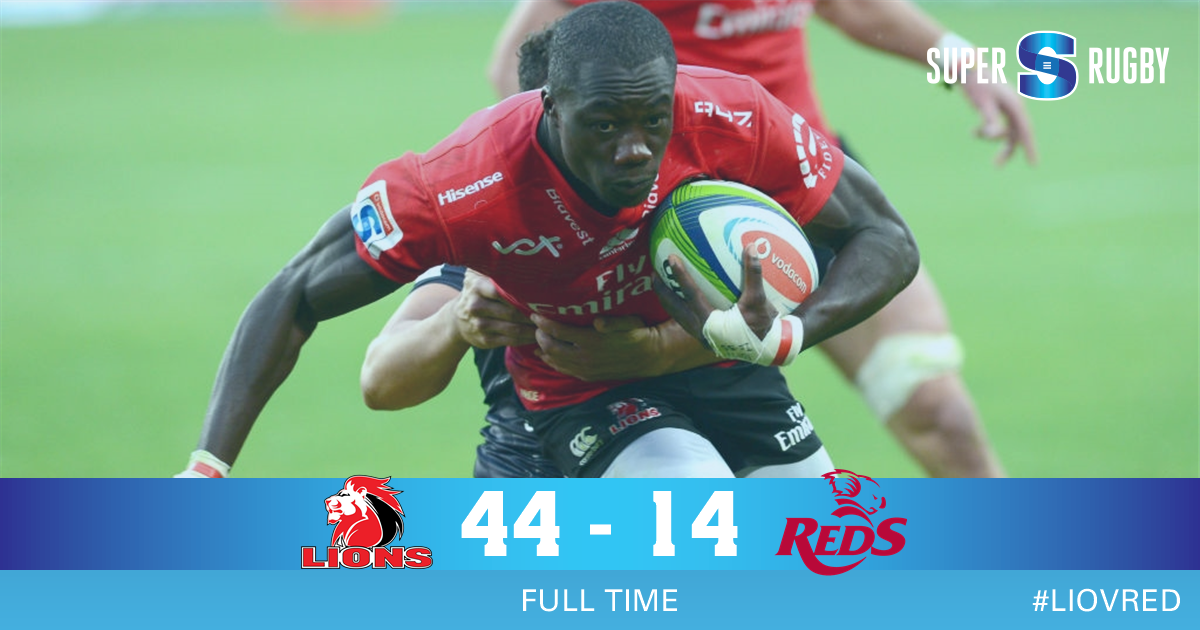 That duly opened the floodgates, and shortly after Cooper's exit Malcolm Marx crossed for his side's fourth try when he found himself free out wide close to the left-hand touchline.

Skosan crossed in similar fashion in the 62nd minute before crossing for his third try after gathering his own chip kick inside the Reds' 22.

To their credit, the Reds did not surrender and they eventually opened their account when Duncan Paia’aua scored their first try five minutes later.

The Lions secured the result when Skosan scored his fourth try in the 73rd minute after gathering a long pass from Janse van Rensburg, before Taniela Tupou burrowed over from close quarters to add some respectability to the score two minutes before the end.