Sharks given a scare by Kings

The Sharks battled back from a six-point half-time deficit to record a hard-fought 19-17 victory over the Kings in Durban.

This match was unsurprisingly scrappy, with handling errors aplenty. Both sides scored two tries apiece and although the home side were under the cosh for large periods, they secured the result via a long-range penalty from Curwin Bosch in the 72nd minute.

If truth be told, the Sharks were lucky to win this match and their approach to the game - especially during the first half - indicated that they underestimated their opponents.

The Kings had a chance to win the game when Lionel Cronje lined up a shot at goal in the 79th minute from 45 metres out but his kick was wide of the target.

The Sharks dominated the territorial and possession stakes during the opening exchanges but made too many unforced errors during this period.

The home side were also impatient on attack and a fourth minute Bosch penalty was all they had to show for their early dominance. The Kings, meanwhile, soaked up the early pressure and frustrated the Sharks with a solid defensive effort.

And against the run of play, the men from Port Elizabeth silenced the Kings Park faithful when they took the lead in the 20th minute via a Ruaan Lerm try. This, when he charged down an attempted clearance kick from Benhard Janse van Rensburg - just outside the Sharks' 22 - before diving onto the ball behind the home side's try-line.

Cronje added the extras which meant the visitors were leading 7-3 after the opening quarter.

The Sharks seemed shell-shocked by that score, but they were handed a lifeline five minutes later when Ross Geldenhuys was yellow carded when he committed a cynical defensive foul close to his try-line.

The Sharks put the resulting penalty into touch inside the Kings 22 and from the line-out, they launched a drive before Lourens Adriaanse dived over for their first try.

Bosch failed with the conversion attempt which meant the game was evenly poised with the hosts leading 8-7.

Five minutes before half-time, things went pear-shaped for the Sharks when Makazole Mapimpi intercepted a wayward Ruan Botha pass midway between the home side's 22 and the halfway mark and outpaced the cover defence before crossing for his side's second try.

Cronje slotted the conversion which meant the visitors went into the interval with their tails up and a deserved 14-8 lead.

The game's scrappy nature continued in the second half with the Kings playing mostly off the home side's errors although it was the Sharks who scored the first points of the half when Bosch added a penalty five minutes after the restart. 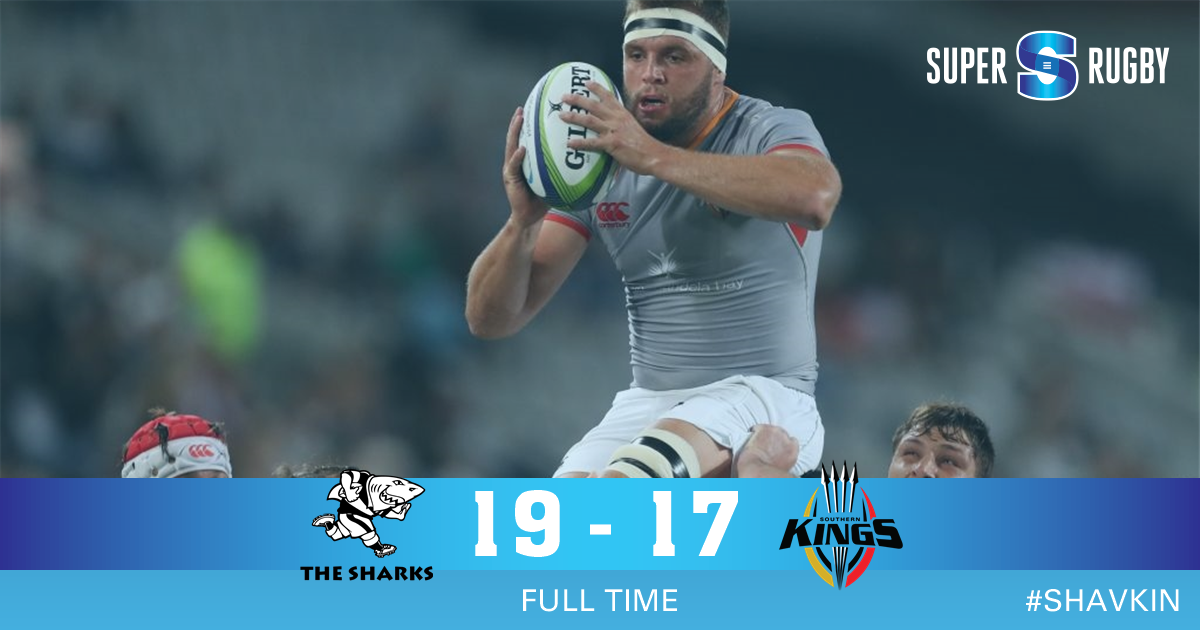 Cronje restored parity with a three-pointer from the kicking tee two minutes later and the visitors clung to that lead for the next 20 minutes.

The Sharks upped the ante on attack and were eventually rewarded in the 67th minute when Kobus van Wyk crossed the whitewash after running onto a well-timed skip pass from Garth April.

Bosch failed to convert but there was some good news for the home side as Chris Cloete was sent to the sin bin for a no-arms tackle on John-Hubert Meyer in the build-up to Van Wyk's try.

The final quarter was a frantic affair as both sides tried to secure the win and the result was decided eight minutes before full-time when Bosch landed his monster penalty from just inside his half.