The Chiefs came from behind to claim a 28-12 win against the stubborn Bulls in Hamilton.

The Bulls produced a well-worked game plan through a pressured defence and clever kicks behind the Chiefs line to enter the change rooms 9-3 at half time. But a try from winger Shaun Stevenson kick started the Chiefs comeback for the Chiefs to win with tries from Damian McKenzie and Atu Moli sealing the win.

The victory sees the men from Hamilton go top of the New Zealand Conference jumping the Crusaders who are yet to play while the Bulls leave the game with nothing despite their heroic first-half efforts.

There were some class acts throughout both teams with some strong performances from Handre Pollard, Rudy Paige while Jamba Ulengo, despite being the casualty in Stevenson's step to score, was incredible throughout, showing defensive brilliance as well as playing a clever attacking game after looking for work all over the field.

The Chiefs looked bewildered in the first half but the general excellence of McKenzie and Aaron Cruden saw their side through to the win.

They handled the game well in the opening phases as they kicked behind the Chiefs line to turn them and keep the home side under pressure in their home half.

Pollard kicked another penalty perfectly and pushed the lead to six points with the Bulls playing well.

The Chiefs were given penalty after penalty with the home side insisting on going for line instead of taking the points with goal. On the 35th minute the Chiefs went for line again and went wide to run the Bulls defence off their feet but the defensive expertise of Burger Odendaal would give no quarter and stopped the attack in its tracks.

The Bulls ended the half in the lead with 9-3 after a strong game plan coming through for them.

Chiefs winger Stevenson the claimed his side the lead when he received the ball, stepped the defence before grubbering it forward and then collecting his own kick to score the try, with Cruden adding the extras and then a penalty moments later making the score 13-9. 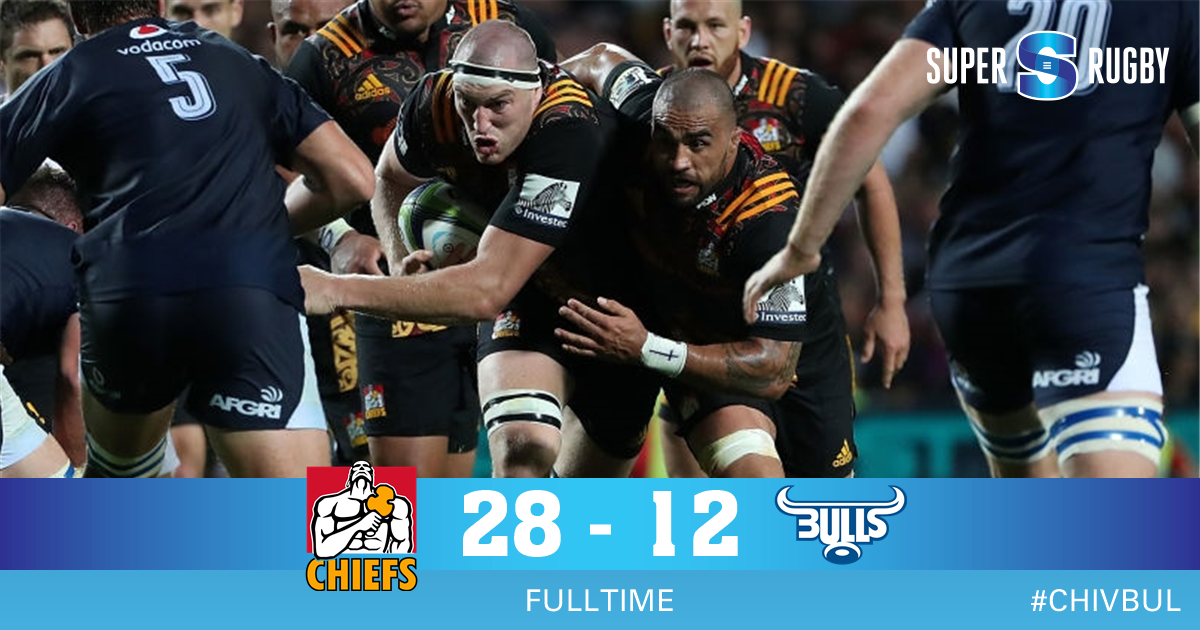 Pollard struck back with another floating penalty from 40 metres out which put his side within one point of the opposition.

The Chiefs started a counter attack and almost broke through the line on a few occasions if it wasn't for the defensive might of replacement prop Lizo Gqoboka who seemed to have the Chiefs' numbers after making a number of tackles in a row. Cruden then received the ball in the midfield and kicked for touch.

The home side used the position well and almost crossed the line through McKenzie but RG Snyman ripped the ball as the full-back dived over and the Chiefs were given a penalty which Cruden knocked over.

The fiery full-back would get his try after a wonderful chip into space behind the Bulls line with McKenzie coming out of no where to collect and then score next to the posts. Cruden neatly knocked over the extras.

The home side put the Bulls' hopes to death after some sustained pressure on the away side's line before Moli crashed over with the weight of his team behind him.