The Stormers made it five victories out of five in Super Rugby this season as they outclassed the Cheetahs, prevailing 53-10 on Saturday.

In reply for the Cheetahs their only try came from Paul Schoeman as they suffer a fourth defeat in six games and fall further off the pace.

The Stormers looked a class apart from their opponents from the outset as they went into the half-time interval leading 22-3 in Cape Town.

The Cheetahs, who had lost Sergeal Petersen to injury before the game, struggled with their defensive decisions in the wider channels and the hosts punished them on several occasions. Nico Lee was one man to make errors with his decision making and the Stormers made him pay.

On seven minutes the Stormers were ahead thanks to Du Preez's boot as he sent over one from distance after no clear release in the tackle.

That became 8-0 seven minutes later when the in-form SP Marais drew the defender and sent over Leyds from 20 metres out for his first try.

Fred Zeilinga did cut the lead to five points on 22 minutes later but the Stormers responded with interest soon after as Marais this time set up number eight Notshe for a run-in. That made it 15-3 to the home side and there was still plenty of time before the break to strike.

They did just that two minutes from half-time as EW Viljoen capitalised on poor defence to free Leyds who scrambled his way over for 22-3.

At this point the Stormers had the bonus point in their hands but knew they had to solidify that in the second half, which they set about doing on 42 minutes when Marais again was the creator, setting up centre Du Plessis for a simply try. With the conversion it was now 29-3.

Despite the Cheetahs hitting back through a driving maul that Schoeman was at the back of, the Stormers were over again on 54 minutes when fly-half Du Preez's lovely chip and regather saw him race over for the hosts' fifth try. His conversion attempt however struck the upright.

The Stormers were now motoring and their sixth try wasn't too long in coming, with Kolisi rolling off Eben Etzebeth for a 41-10 advantage.

Marais was again involved in their next score as he put the ball back inside for Notshe, which was his second crossing, after good initial work from Viljoen. With Du Preez having been replaced, Kurt Coleman converted the try and on 66 minutes the Stormers were now 48-10 ahead.

To rub salt in the Cheetahs' wounds they had the chance to cross for a second try when Henco Venter looked set to go over from long range. However, Cheslin Kolbe's last ditch tackle led to the number eight spilling the ball over the try-line, leaving him red faced.

The Stormers made them pay as they rubber stamped their win late on with Kolisi setting up Notshe for his hat-trick in an eight-try success. 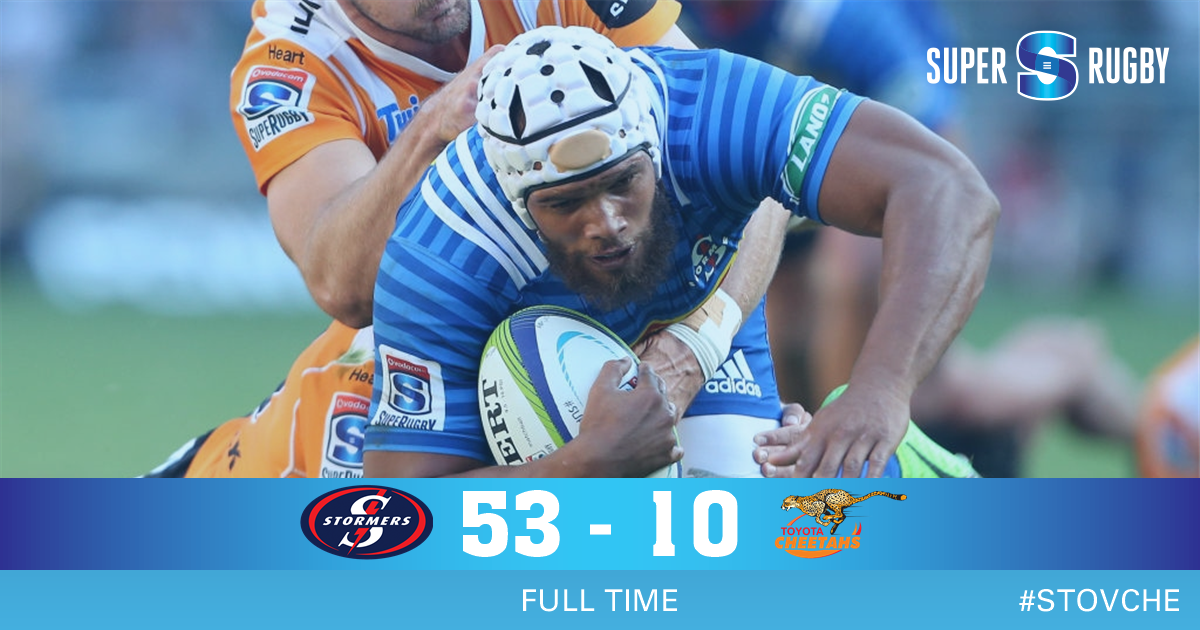