The Highlanders' recent resurgence continued when they claimed a hard-fought 26-20 victory over the Blues in Dunedin on Saturday.

Unlike the previous clash between these sides - which the Highlanders won 16-12 in Auckland in Round 3 - this was a thrilling affair with both sides running the ball from all areas of the field.

The Blues had the better of the early exchanges and led 20-13 at half-time but the Highlanders launched a superb second half fightback to take the spoils.

The result is the Highlanders' third successive win - after they beat the Brumbies and the Rebels - and takes them above the Blues into fourth place on the New Zealand Conference table.

The Highlanders drew first blood courtesy of a Marty Banks penalty in the ninth minute but the Blues took the lead three minutes later via a Charlie Faumuina try.

Augustine Pulu and Michael Collins laid the groundwork with superb runs in the build-up and Faumuina did well to sell the cover defence a cheeky dummy before crossing over from close quarters.

The Blues were dominant and spent the next 15 minutes camped inside the Highlanders' but two Pier Francis penalties were all they had to show for their efforts.

The home side soaked up the pressure and soon narrowed the gap courtesy of a Ben Smith try.

This after Patrick Osborne launched a counter attack from inside his 22 and after the ball went through several pairs of hands, Smith had an easy run-in under the posts.

The Blues did not panic though and continued to attack and four minutes before half-time they were rewarded with their second try - Gerard Cowley-Tuioti barging over from close quarters with three defenders on his back.

On the stroke of half-time, the Blues were blown up for an idiscretion at a scrum and Banks added the resulting penalty which meant the Blues led 20-13 at the interval.

The Highlanders made a determined start to the seond half and came close to scoring from the kick off after taking the ball through 18 phases.

Shortly afterwards, Malakai Fekitoa ran onto a pass from Aaron Smith deep inside the Blues' 22 and came agonisingly close to scoring, but he was stopped just short of the whitewash by a brave tackle from Francis.

Two minutes later, Fekitoa made up for that missed opportunity when he burst through a George Moala tackle and crashed over for his side's second five-pointer.

Banks added the extras which meant the sides were now deadlocked at 20-20 but the home side regained the lead when he slotted his third three-pointer from kicking tee in the 55th minute.

Shortly afterwards, Sonny Bill Williams made his long awaited return from injury off Blues bench and the All Black soon made an impact with a brilliant run and trademark offload. The Blues reaped no reward from from that effort though as Sam Prattley was hauled in by the cover defence close to the Highlanders try-line.

The Highlanders finished stronger and another Banks penalty in the 73rd minute put more daylight between them and their opponents. And although the Blues launched several attacks in the game's losing stages, they were kept at bay by a solid defensive effort from the home side. 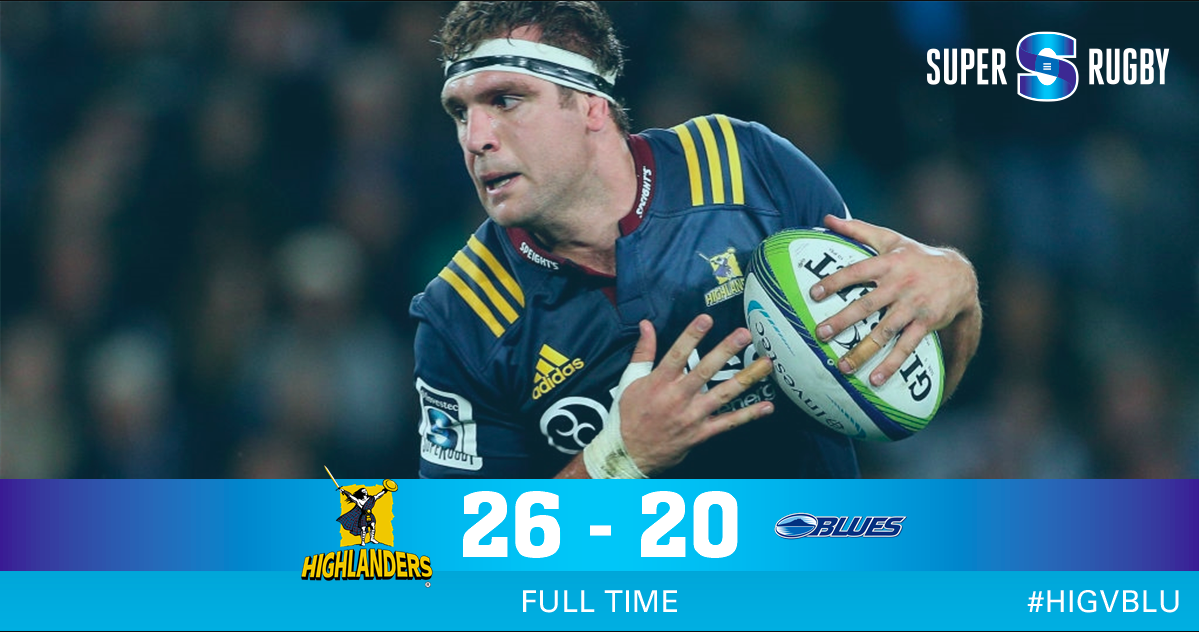