The Brumbies consolidated their position at the top of the Australian Conference when they beat the Reds 43-10 in Canberra on Saturday.

In what started out as a typically robust Australian derby, the Brumbies gradually gained the upperhand and eventually outscored their visitors by six tries to one which also secured them a deserved bonus point.

The win means the two-time champions have now won their 10th successive match against Australian opposition and they are now eight points clear of the Waratahs at the top of the Australian Conference while the Reds are 10 points adrift of the men from Canberra in third place.

The visitors made an impressive start and although James Tuttle missed an early penalty attempt, they took the lead via a Chris Kuridrani try in the seventh minute.

This after George Smith, Scott Higginbotham and Samu Kerevi did well with strong carries in the build-up before Kuridrani crashed over after gathering a flat pass from Tuttle deep inside the Brumbies 22.

Five minutes later, Wharenui Hawera opened the Brumbies' account via a penalty but the next 15 minutes was an arm wrestle as both sides tried to gain the ascendancy.

The Brumbies eventually took the lead in the 28th minute when Tevita Kuridrani showed great leg drive and determination before barging over from close quarters.

Hawera added the extras which gave the home side a three-point lead but Tuttle slotted a penalty on the stroke of half-time which meant the sides were deadlocked at 10-10 at the break.

The Brumbies started the second half with a bang when two minutes after the restart, Robbie Abel dotted down from the back of a maul inside the Reds'  22.

Shortly afterwards, Aidan Toua gathered a wayward Allan Alaalatoa pass close to the Reds' 10-metre line and outpaced the cover defence before dotting down under the posts.

The hosts were now firmly in control and, their dominance was best illustrated 10 minutes later when their forwards displayed great strentgh and control to push their counterparts off the ball at a scrum before Jarrad Butler gathered at the base of the set-piece and crossed for an easy five-pointer.

That try knocked the stuffing out of the Reds and they offered little resistance to the Brumbies onslaught as the match progressed. The hosts continued to attack and in the 71st minute Tevita ghosted past a couple of defenders but his cousin Chris did well to hold him up as he crossed the whitewash.

Two minutes later, the Brumbies' sealed victory when James Dargaville scored their fifth try after gathering an inside pass from De Wet Roos close to the Reds tryline.

But the hosts were not done yet and shortly before the full-time whistle,Chris Alcock added the final nail in the visitors' coffin when he powered his way over the line after running onto a well-time pass from Toua. 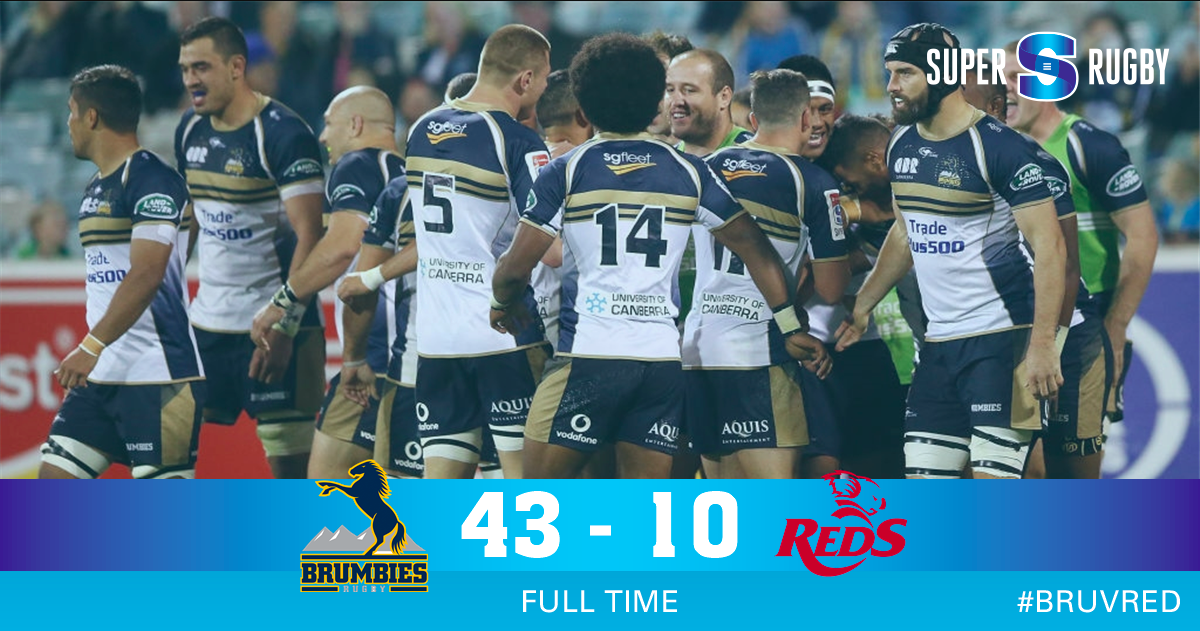