Siya Kolisi led his charges to an incredible 34-26 victory in a thriller at Newlands Stadium.

It was a game that would have left rugby fans drooling after seven tries were scored in the first half. The Stormers dotted down through Sikhumbuzo Notshe, before Siya Kolisi, SP Marais and Robert du Preez all scored with Chiefs winger Toni Pulu grabbing a brace.

With the win the Stormers stamp their authority on the Africa 1 Conference as they go to 26 points and go six games in a row unbeaten. While the Chiefs remain at third place on the New Zealand Conference table after not being able to get a losing-bonus point.

Kolisi was sensational in the fixture after scoring his try, leading fantastically as well as making some vital steals throughout the clash. Marais deserves commendation as well after contributing to the score line through his try as well as some penalties from far out.

The Stormers scored the first try of the match after a solid drive right up the field before the ever-exciting Notshe took the ball into contact and using his quick feet managed to dart around the opposition defence to go over the in the corner with Du Preez knocking over the extras.

Moments later the Chiefs responded with what could be the try of the season. The movement started with Damian McKenzie in his own 22 metre area before charging it up field and giving it off to Lowe who rounded several Stormers players before handing it back to Lowe who the gave it Michael Leitch before passing to Pulu to score, with Cruden hammering it over.

It wasn't long before the Stormers used their forwards' dominance to make it to the Chiefs line for captain fantastic Kolisi to barge over and score with Du Preez adding the two points again. The Chiefs closed the gap on the Cape Tonians after McKenzie slotted a penalty making the score 14-13.

The Chiefs proved to be dangerous from all over the park as they scored another try from their own half as McKenzie made a fantastic break before giving it to Pulu to score for his second.

Just before the end of the first half the Stormers were camped out on the Chiefs line but couldn't quite find a way through the defence before the home side were given a scrum on the just outside the five metre line and Du Preez used the position well and instead of giving the ball wide he took it in and charged over for his side's third try making the half-time score 24-18.

Another sensational try was then scored after Cheslin Kolbe snatched a pass from the Chiefs and grubbered the ball through as he was just about to get tackled. Leyds then chased and collected the ball and was tackled to ground but wasn't held. He looked for support and saw Marais out wide with space and gave off a back hand, spinning pass out the back door to the full-back who dived over in the corner.

The Chiefs got back quickly after getting to the Stormers five metre line from the kick off with James Lowe going over in the corner.

It was a frantic final movements of the game as the Chiefs were desperate to get over the line to try and get in range of victory but the Stormers defence was outstanding to stay cohesive after five minutes after an unrelenting Chiefs attack. 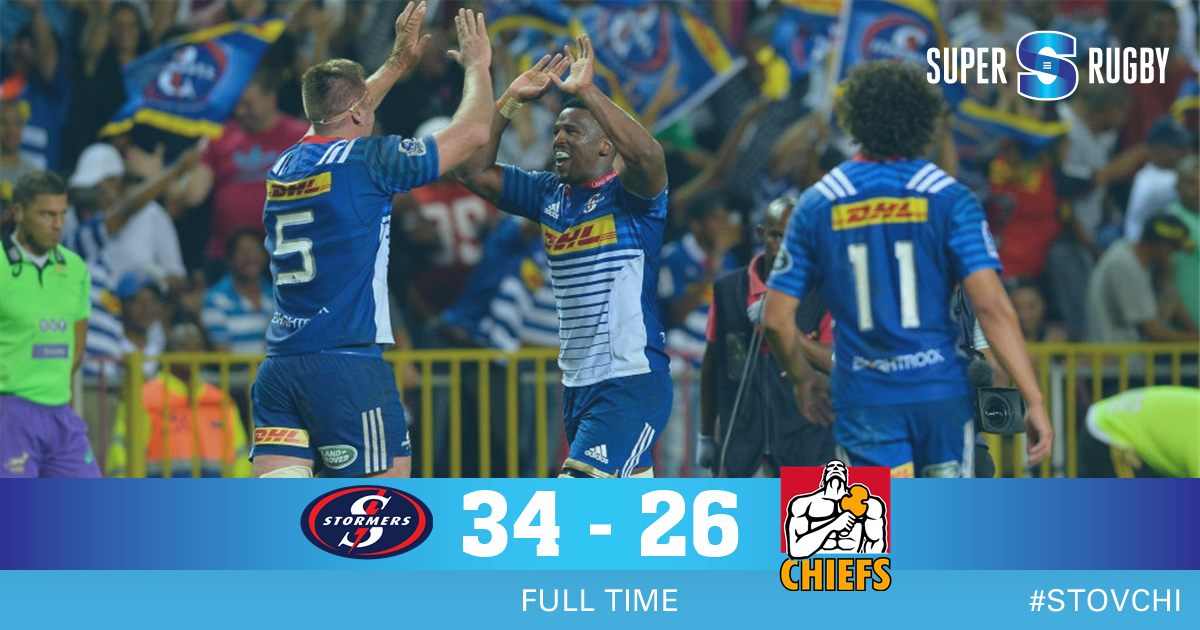