The Lions earned a hard-fought 16-29 victory over the Stormers at Newlands in Super Rugby on Saturday.

The result means the Lions usurp the Stormers at the top of the South African group and deservedly so after an excellent opening 40 minutes.

This was truly a game of two halves. The Lions enjoyed all the possession and territory in the opening 40 minutes, but in the second half it was the Stormers who came out with renewed fire and put the Lions under the cosh.

But the Lions responded with an absolutely terrific defensive effort late on, keeping the Stormers at bay.

After Stormers scrum-half Jano Vermaak was penalised for a tip-tackle just after the match got under underway, the Lions kicked for touch from the resulting penalty.

From the lineout, the Lions secured possession, before going on a powerful driving maul from which prop Malcolm Marx barged over to make it 5-0 to the Lions.

Two minutes later Lions’ star centre Rohan Janse Van Rensburg went down with what looked like a serious knee injury and was replaced by Harold Vorster in the fifth minute, in what could prove to be undoubtedly a serious blow for the Lions.

The Stormers had early lineout struggles, with hooker Bongi Mbonambi struggling to find his jumpers. Despite this, they responded in emphatic fashion with Dillon Lleyds once again proving his class.

A move which started in their own half and including great hands from the back three was finished off in trademark clinical style by Lleyds in the 10th minute, who is now becoming a firm fans’ favourite. Robert Du Preez slotted the conversion from the corner to make it 7-5 to the Stormers.

This lead lasted less than a couple of minutes before Vorster burst through the Stormers’ defensive line to dot down in the 13th minute. Elton Jantjies slotted the conversion to make it 12-7 to the Lions.

But despite the Lions dominating possession and enjoying territorial advantage, the Stormers still managed to stay in touch when Robert du Preez slotted an easy penalty to reduce the deficit to two.

Jaco Kriel was then yellow carded in the 25th minute after a late tackle on Du Preez as the fly-half was readying himself to kick. Contact was made with the head area and Kriel could have no complaints.

While Du Preez was receiving attention, SP Marais slotted the resulting penalty between the posts to give the Stormers a 13-12 lead.

However, this lead was short-lived, as Kriel bundled over in the 27th minute for the Lions after the visitors went through numerous phases after some stoic defence by the Stormers.

Jansen slotted the conversion and the sides went into the interval with the Lions leading 22-13.

After the resumption of the second half, the Stormers were really putting the pressure on the Lions, camping on their try-line for a good ten minutes but were unable to finish. This was mainly due to an incredible Lions defensive effort. Tempers started boiling over especially from the Stormers, with Eben Etzebeth at the forefront of the scuffle.

The second half consisted of one Stormers attack after another, as Robbie Fleck’s men came out with renewed vigour.

But the Lions responded with a terrific defensive effort, with the Stormers literally camped on their touchline for the first fifteen minutes of the second half.

Finally, the Stormers got points on the board, when SP Marais slotted a penalty from 47 yards out to make it 16-22 in the 70th minute to set up a thrilling finale.

However, the Stormers’ glimpse of getting something out of the game was extinguished when the Lions went over for a try in the 72nd minute when speedster Sylvian Mahuza went over in the corner after brilliant team play.

Jantjies converted to make it 29-16 to the Lions and that’s how it ended as the Lions snapped the Stormers’ unbeaten home record this year. 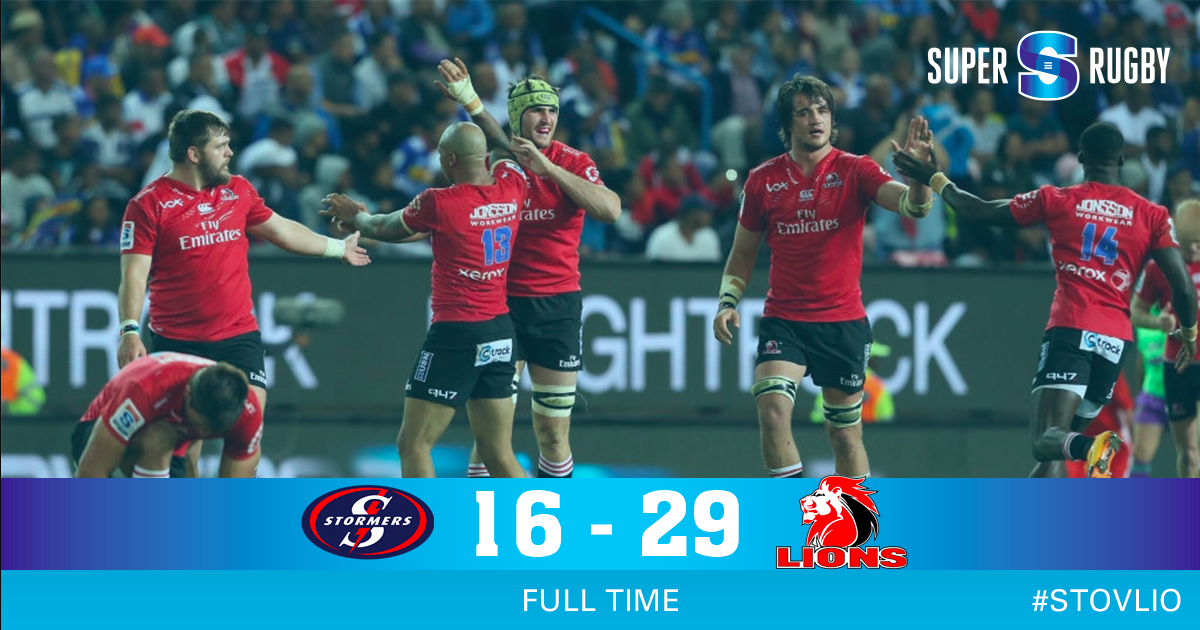