The Crusaders recorded their highest ever score over the Stormers, scoring eight tries and winning 57-24 in Christchurch.

The Stormers dominated possession and territory in the opening ten minutes but thereafter it was one-way traffic as the Crusaders ran riot so much so they were able to take captain Kieran Read off at half-time with a 36-3 lead. By the time the game was finished, it was a comprehensive 57-24 victory for the gome side.

The Crusaders have now won 14 of the last 16 meetings between these two sides and the last six in a row. The Stormers have never won away against the Crusaders. In fact, the Christchurch-based side have now won 38 of their last 39 home games against all South African opposition, with the Sharks the only team to beat them at AMI Stadium back in May 2014.

It doesn't get any easier for the Stormers on their New Zealand tour as they face another in-form New Zealand outfit in the form of the Highlanders next weekend.

Meanwhile, the Crusaders maintain their 100% winning streak to the season.

The first ten minutes saw the Stormers applying pressure on the Crusaders and enjoying dominance of both the territory and possession. In fact, the home side barely touched the ball. Fly-half Robert Du Preez gave them something to show for this dominant opening by slotting a penalty between the posts, giving the away side a 3-0 lead.

However, the Crusaders showed how clinical they are, finishing off the first opoortunity they had. George Bridge scored in the 12th minute after the Saders took the ball through the phases. The Stormers will count themselves unlucky as they appeared to have got their hands and the ball but the referee's whistle never came. Richie Mo'unga added the extras to make the score 7-3.

Mo'unga then added three from a penalty after relentless pressure around the Stormers 22 resulted in a penalty to make the score 10-3.

A big factor in the home side's superiority on the scoreboard was their dominance of the line-out and the scrum, despite the Stormers boasting a heavier pack.

However, their scrum improved as they won two on the trot, relieving the pressure as they could finally get out of their half with a penalty kicked out to touch. The first half was a cagey one, with a lot of penalties being given away by both sides.

A careless acidental offside in which Cheslin Kolbe ran into the back of Chris Van Zyl resulted in a penalty for the Crusaders.

They put the ball into a touch for a lineout five metres out from the try-line. They applied the basics well from the set-piece going right before coming back to the blindside as Richie Mo'unga showed his class, beating one defender before passing to George Bridge who ran unnoposed under the posts to complete his double. Mo'unga added the extra to make it 17-3 to the home side in the 30th minute..

The Crusaders won far too many turnovers on Stormers ball for the away side to have any hope of getting something from the game. The Stormers looked a bit shell-shocked as the Bridge then completed his hat-trick two minutes later. They exposed the Stormers' lack of numbers out wide with an audacious offload from Seta Tamanivalu and then Jack Goodhue's skilful double-skip pass gave Bridge the easiest of jobs to dot down. Mo'unga added a sublime conversion from the touchline to make the score 24-3.

The Crusaders then really began to turn on the style. A thrilling move which consisted of a couple of unbelievable offloads with a move going from left to right and back to the left, Kieran Read capped off an impressive first-half performance in only his second game back from a lengthy layoff with a classy try to make it 29-3. Mo'unga missed the reslulting conversion from out wide.

There was still time for another 'Saders score before the half-time whistle, as Read grabbed his second. Relentless attack from The Crusaders ends in a long ball from Mo''unga to Read who finds himself on the other wing this time and dots down. This time, Mo'unga made no mistake with the conversion as the sides went into the break with the Crusaders in a commanding 36-3 lead.

The Crusaders had the luxury of taking captain Kieran Read off at half-time who was replaced by Pete Samu.

The Stormers responded immediately after the interval when winger Cheslin Kolbe made a trademark interception, running the length of the field to dot down. Du Preez added the extras to make it 36-10.

Bjorn Basson, who barely touched the ball the whole game, then got the Stormers' second. Good, strong forward play from the away side since coming out after the break meant they were camped in 'Saders territory for the opening ten minutes before the relentless pressure paid off when they eventually decided to go wide. Eben Etzebeth threw a loose pass which Basson did well to collect. There was little on but he handed off a defender and darted over in the corner in the 52nd minute. Du Preez added the extras to make the score 36-17. 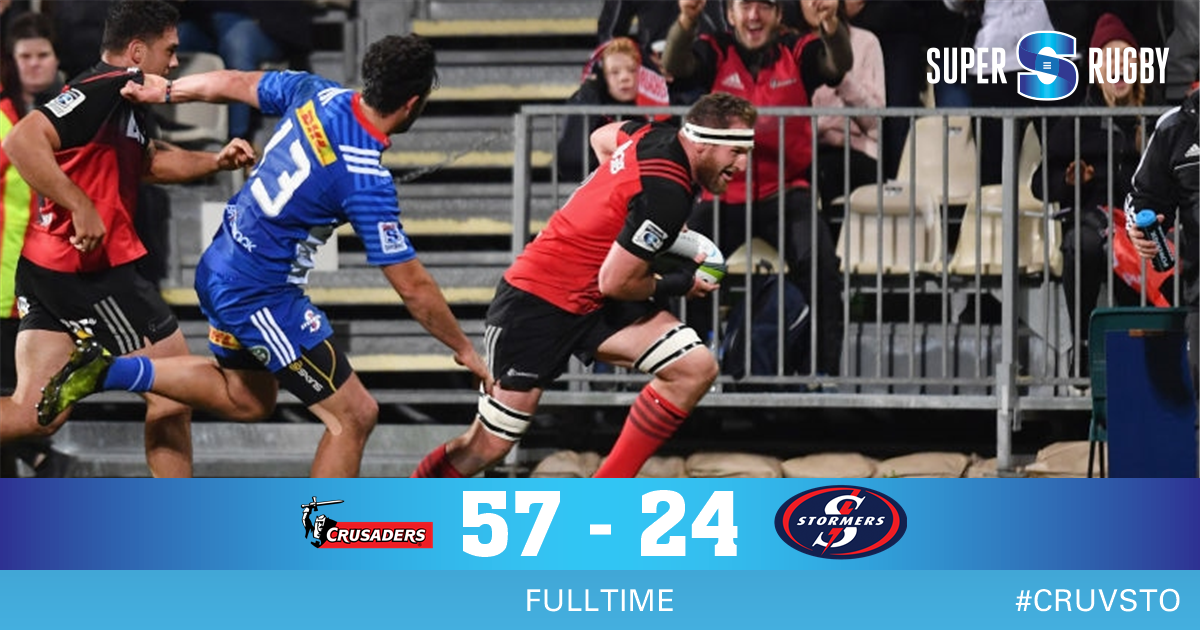 The Crusaders then executed a perfect rolling maul from a five metre lineout and substitute prop Michael Alaalatoa got over in the 59th minute. Mo'unga's accurate kicking display continued as he converted to make it 43-17.

Stormers full-back Dillon Lleyds makes a break down field but a loose pass results in a Pete Samu interception who ran coast to coast to dot down under the post to pile further misery on the away side. Mo'unga added the extras to bring up the half-century and make it 50-17 to the home side.

The Stormers refused to give up. After elusive stepping by Kolbe, Frans Malherbe did well to barrel over in the 67th minute showing good awareness by making contact with the base of the post. Du Preez converted to make it 50-24.

Manasa Mataele put the icing on the cake when he intercepted with the Stormers on the Crusaders' ten-metre line before running the length of the field to score in the 77th minute. Mitch Hunt added the extras to make it 57-24.