Waratahs fight back to beat Reds

The Waratahs claimed their third victory of the season as they got the better of the Reds in close one, winning 29-26 at Suncorp Stadium.

Bernard Foley kicked 19 points for the visitors to go with tries from Nick Phipps and Michael Hooper as they came from behind to edge out their traditional rivals.

The Reds will be no doubt kicking themselves after suffering a seventh loss of the Super Rugby campaign as they fell away in the second half, with their scorers being Karmichael Hunt, Lukhan Tui, Izaia Perese and Stephen Moore.

It was an entertaining first period in Brisbane which finished 17-19 thanks to five tries, three from the Reds and two from the Waratahs.

Foley missed an early penalty for the latter and the Reds made him pay on 12 minutes, crossing through full-back Hunt after number eight Scott Higginbotham bumped off the attempted tackle from Hooper. Cooper slotted the simple conversion and the Reds were off and running.

Cooper missed the chance to make it 0-10 on 18 minutes and this time it was the turn of the Waratahs to respond, with good work down the right wing leading to scrum-half Phipps burrowing his way over the line. Foley was on target this time and the game was locked up at 7-7.

Hunt was again involved in the next score as his line bust saw him offload to lock Tui who crossed. Cooper missed the kick so it was 7-12.

That became 7-19 on the half-hour mark when Cooper swooped to intercept a Waratahs pass on his 22 before realising he would not have the pace to go all the way. Smartly he put boot to ball and weighted his kick perfectly for chasing wing Perese who dotted down untouched.

Foley did manage to reduce matters to 10-19 three minutes later and when Hooper scored after Foley's inside ball, suddenly it was 17-19.

There was still time for one last play and it was a poor decision from Perese, who was yellow carded for taking out Dean Mumm in the air. 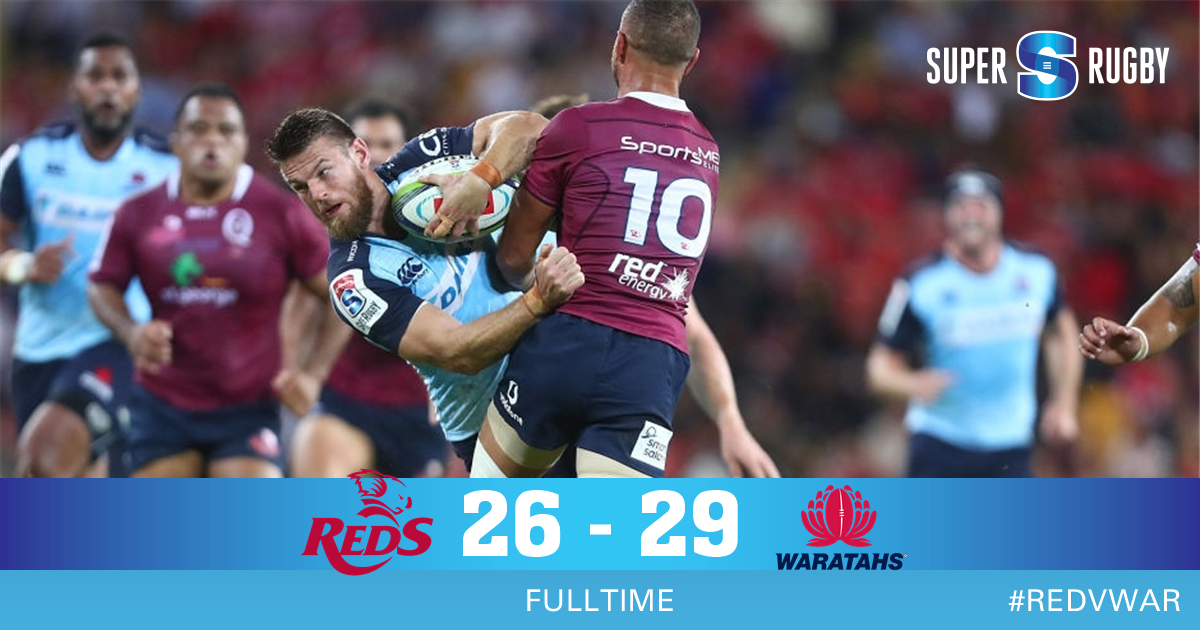 With Perese in the bin the Waratahs would have 10 minutes after the break to make their numerical advantage count and Foley did just that with a penalty which pushed them 20-19 in front. However, the Reds hit back with a lineout drive with Moore the scorer to make it 26-20.

It was clear the contest was going down to the wire and that point was emphasised when Foley struck to make it 23-26 with 17 minutes left.

Foley was on target again on 73 minutes from 40 metres out when the Reds were pinged at a scrum, levelling the scores with a calm strike before he added the match-winning penalty with two minutes to play as the 'Tahs prevailed.