The Crusaders maintained their winning streak when they beat the Cheetahs 48-21 in Bloemfontein on Saturday.

The New Zealand side have now won nine in a row and scored over 40 points in each of their last four games.

Winger George Bridge has now scored consecutive hat-tricks – after doing the same against the Stormers last weekend – and fly-half Richie Mo’unga continues to amass points with 18 in this game.

Meanwhile, the Cheetahs wil feel that the scoreline flatters the Crusaders as they butchered at least three chances to dot down.

It was an end-to-end game and a great advert for rugby but the away side were just that much more clinical as they have shown week in and week out.

Give them a sniff and they will punish you. Unfortunately, the Cheetahs just did that by missing over 50 tackles.

The result leaves the Cheetahs with just two wins from nine games and worryingly they have lost their last six.

The Crusaders scored eight tries last weekend against the Stormers and seven in this game. They have really taken a liking to the South African sides.

From the resulting lineout, the Crusaders took it through the hands. Oupa Mohoje was penalised for going off his feet at the ruck. Sam Whitelock opted for poles and Mo’unga made no mistake from the penalty, propelling his side into a 3-0 lead in the 10th minute.

David Havili then went on a wonderful run which almost spanned the length of the field before Raymond Rhule intervened with a try-saving tackle before Havili could offload.

Havili did score though when from the resulting Cheetahs scrum, the ‘Saders pushed the Cheetahs off their own ball.

They quickly spread the ball onto the right wing before wing Seta Tamanivalu bounced Raymond Rhule to create the space on the outside before a skilful basketball pass over the head of Clayton Blommetjies allowed Havili a free run to the line. Mo’unga missed the conversion from out wide, keeping the score locked at 8-0.

A superb counter-attack from the Cheetahs earned them their first try of the game. The move started with Sergeal Petersen in his own half. The winger offloaded to Blommetjies, who found Venter.

The move went to ground, but Petersen popped up to run around the blind side and give the ball inside to Rhule who ran over for a great team try in the 18th minute. Niel Marais converted to put the score at 8-7, the Cheetahs only one point behind.

The Cheetahs had more than one opportunity to extend their lead but will be disappointed they didn’t convert. Once again Petersen and Blommetjies were heavily involved with their scintillating pace.

However, the Crusaders showed that they are more clinical by scoring the next try. The Cheetahs were guilty of missing their tackles and made it too easy for Bridge to scythe his way through in hte 34th minute. Mo’unga converted as the ‘Saders went into a 15-7 lead.

The Cheetahs thought they had responded almost immediately. Prop Ox Nche was the unlikely source of the disallowed try bouncing a defender before producing an offload worthy of SBW fame to find Petersen who ran well of his hip to gather and run through to dot down but Federico Anselmi sent it upstairs to the TMO, who wrongly ruled it out.

The Crusaders rubbed salt in the Cheetahs wounds by scoring soon after. Mo’unga produced a precise cross-field kick to find Bridge who stepped back on the inside. Once again the Cheetahs will be disappointed they could not bring him down as he beat numerous defenders to race in under the posts for a try converted by Mo’unga as the Crusaders took a 22-7 lead into the break.

It must be said the first-half was a fantastic advert for expansive rugby as both sides opted to run the ball whenever the opportunity allowed it.

It was not a good start for the Cheetahs after the break as lock Armandt Koster was yellow-carded for cynical play at the breakdown.

The Crusaders were now winning a number of penalties and were opting to go for scrums to capitalise on their numerical adavantage.

From one of these scrums, Mo’unga stepped his way over after receiving first-phase ball from the scrum-half Bryn Hall. It was too easy and he converted his own try as the away side extended their lead to 29-7 in the 46th minute.

The Cheetahs responded when brilliant hands from Nico Lee created space for Nche who showed a decent turn of pace to go in under the posts. Marais converted to make it 29-14.

But once again the Crusaders refused to be outdone. Sublime interplay from the away side with wonderful movement and passing made it look so easy. Scott Barrett was the catalyst for the move, making the clean break. The ball was recycled from the ruck and Ryan Crotty assisted Havili who grabbed his brace.

They dotted down again just two minutes later as the Cheetahs continued to miss tackles. Havili got around the outside of Cheetahs substitute Clinton Swart before passing inside to Crusaders substitute scrum-half Mitchell Drummond.

In fairness it was brilliant support play from Drummond who coasted in under the posts. Mo’unga converted to make it 43-14 with a quarter of the game to go.

Bridge then grabbed his second hat-trick in as many weeks when he showed great strength to fend off two Cheetahs defenders before dotting down in the corner. Once again Havili was the creator, handing off a defender to create the space. By now it was 48-14 to the Crusaders.

Captain Sam Whitelock was then guilty of retaliating with an elbow and received a yellow card with ten minutes to go.

Sergeal Petersen scored a consolation try for the Cheetahs just before the full-time whistle.

It was a simple of task of capitalizing on the extra man and exposing the Crusaders out wide. Marais converted for the third time to make it three from three and ensure the match ended 48-21. 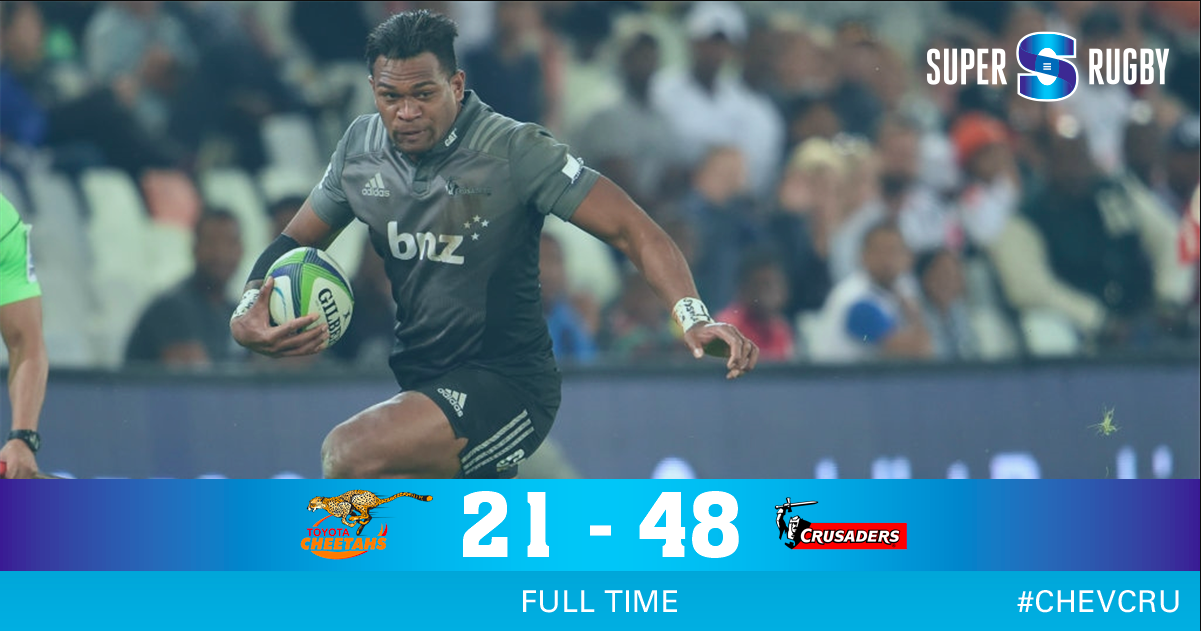