Hat-trick hero Vince Aso broke Tana Umaga's try-scoring record as the Hurricanes claimed a 61-7 victory over the Cheetahs in Wellington.

A win for the Hurricanes means they leapfrog the second-placed Chiefs on the New Zealand Conference and bounced back from what would have been a disappointing loss to the Crusaders last weekend.

A hat-trick from Aso, breaking Umaga's single-season try-scoring record of 12 for the Hurricanes, and tries from Vaea Fifita, Ardie Savea, TJ Perenara, Jeff Toomaga-Allen, Ben Lam and Leni Apisai consigned the Cheetahs to a humbling defeat.

The away side scored through a sole Fred Zeilinga try.

The Cheetahs did well in the first-half with good line speed on defence and managed to shut down the Hurricanes' options out wide for the most part.

However, they made elementary errors and were guilty of shooting themselves in the foot as they gifted the Hurricanes easy tries.

And in the second half the floodgates well and truly opened as the Cheetahs were exposed for missing too many tackles. Also, the potent combination of centres Ngani Laumape and Aso was too much for the Free State side. Laumape and Aso are the competition's top try-scorers having scored 11 and 13 tries respectively this season.

The first try of the match came when the Cheetahs took a quick penalty close to their try-line which was firstly the wrong option. Secondly, their kick was charged down and after regaining the ball, a suicidal Raymond Rhule pass was intercepted by Fifita who scored under the posts as the home side surged into a 7-0 lead after a Beauden Barrett conversion.

After the ball went into touch on the halfway line, the Cheetahs were asleep as Perenara took it quickly allowing the Canes to make some good ground before they went wide. The ball travelled through the hands before Laumape executed a hand off and fed Aso who sprinted over for a try.

The Cheetahs showed character to respond. After winning a penalty, they kicked for touch. From the lineout, they set up a rolling maul. The ball went wide and after a couple of phases, Zeilinga stepped inside and dived over to score. He converted his own try to halve the deficit.

The Canes' next try came from a lineout drive from which hooker Ardie Savea profited to go over for his fifth try of the season. Barrett's conversion proved to be the final act of the first-half as the Hurricanes took a 21-7 lead into the dressing-room without really haven broken a sweat.

The Hurricanes continued to employ the rolling maul to good effect in the second-half. The Cheetahs were warned by referee Nic Berry to stop bringing down the Hurricanes' mauls illegally and were eventually penalized when Elandré Huggett was yellow-carded for doing just that.

Once again, from the resulting penalty the hosts kicked for touch and set up the lineout drive. After a few phases, TJ Perenara ducked and dived to dot down. Barrett added his fourth conversion to make the score 28-7 after 45 minutes. 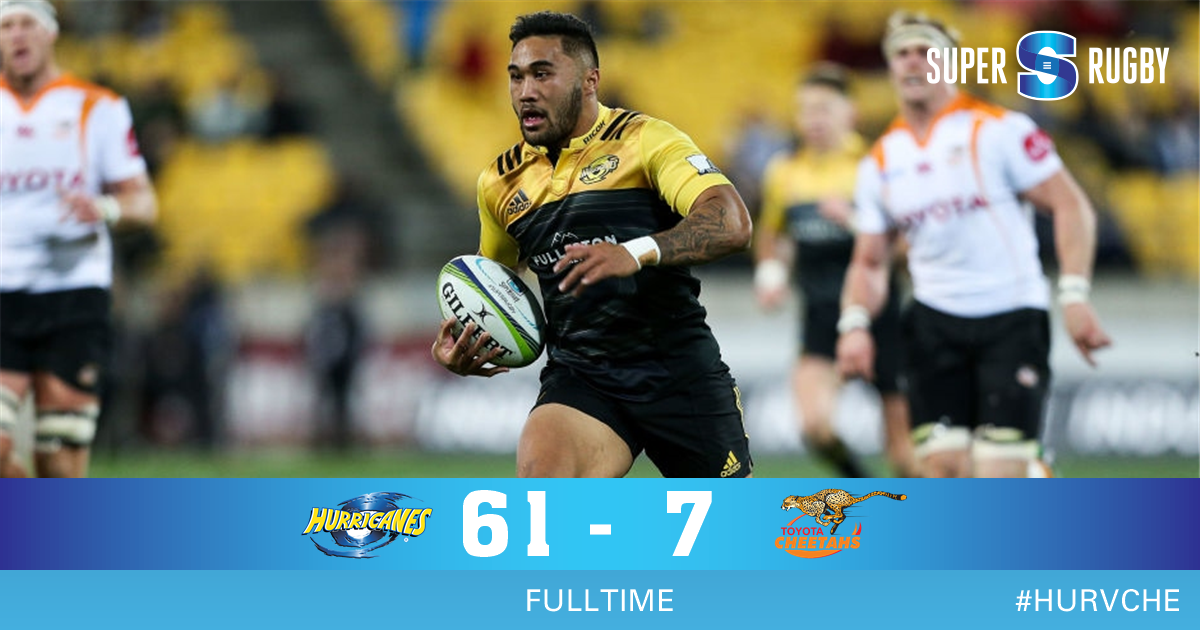 From the Cheetahs' kick-off, the Hurricanes continued to run rampant. Laumape was the instigator once again with another dismissive hand-off sending Henco Venter sprawling on the turf before passing on his outside to centre partner Aso who had the pace to outsprint Rhaymond Rhule to the line. Once again it was the partnership of Laumape and Aso wreaking havoc.

After Ardie Savea was held up over the try-line, the Canes' won a five-metre scrum. From the scrum, prop Toomaga-Allen burrowed his way over to make the score 42-7 after 58 minutes.

The Hurricanes then ran the ball from a scrum just inside their own 22. Laumape hit the gap thanks to some poor defence and kicked downfield where Aso had the pace to collect the ball and score his third try of the game for a hat-trick. Brilliant combination play once again from the Canes' two centres.

From a scrum the Cheetahs went down the blindside. Sergeal Petersen stepped his way into some space and kicked cross field, but the bounce favoured the Canes. They made some ground down the right hand touchline before they took the ball infield. It went through the hands and Ben Lam was sent on his way for a sensational try, with Brad Shields' dummy being a highlight.

From a lineout in their own 22 only five metres out the Cheetahs took it clean but then lost it backwards, where Apisai was waiting on hand to pick it up and fall over for the try to make it 61-7. And that's how it remained.