Crusaders down the Rebels

The Crusaders made it 13 wins out of 13 when they beat the Rebels 41-19 at AAMI Stadium in Melbourne on Saturday.

Rebels' tries from Toby Smith and a brace from Marika Koroibete were not enough as the Crusaders scored through Manasa Mataele, Seta Tamanivalu, David Havili, Mitchell Drummond and a Jed Brown brace.

The result means the Crusaders have now emerged victorious from each of their last six visits to Australia; at no point in Super Rugby history have they enjoyed a longer streak in the nation.

The Rebels, meanwhile have only won one game in 12 attempts this season and are rooted to the bottom of the Australian Conference.

However, the winning margin of 21 for the Crusaders was less than expected and is testament to an improved Rebels performance from recent weeks.

The Rebels did well to repel the Crusaders in the opening 15 minutes with the away side only having a penalty from Richie Mo'unga to show for their efforts.

The 'Saders, however, did get their opening try in the 17th minute when Sam Whitelock smashed through three defenders before offloading to Havili. Havili's pass set Mataele on his way over the try-line. Mo'unga added the extras as the away side registered a 10-0 lead.

Thereafter, the Rebels were penalised for collapsing the scrum. The Crusaders kicked the penalty in to touch to set up the attacking lineout. From the set-piece, they set up the rolling maul and substitute Brown went over the try.

Rebels' inside centre Reece Hodge was yellow-carded for a deliberate knockdown in the lead-up to the try.

Soon after that indiscretion, Tamanivalu got the Saders' third try exposing the 14-man Rebels out wide and their passive defence. Mo'unga added the extras to make it 24-0 on the half-hour mark.

The Rebels grabbed a try after some clever play from the lineout. With the drive set up nicely, Colby Fainga'a assisted Koirobete and he finished it off easily. Ben Volavola added the extras.

In response, Brown notched up his brace as the 'Saders replied immediately to ensure they took a 31-7 lead into the break.

The Rebels made the best possible start to the second half when they scored from the kick-off. Prop Smith burrowed over from eighth phase ball. Hodge converted to make the score 31-14.

However, the visitors responded immediately through an excellent Havili try in which he showed pace, power and guile as well as a hand-off, showing why he is third highest in Super Rugby for defenders beaten this season.

From quick turnover ball, the Rebels got their third try when Hodge released speedy number eight Amanaki Mafi who gave a skilful one-handed pass to Koirobete who grabbed his second to make it 36-19 after 57 minutes.

Substitute Mitchell Drummond got the Saders' sixth after Jordan Tafua assisted him with a strong carry to make the score 41-19. And that's how it remained until the end. 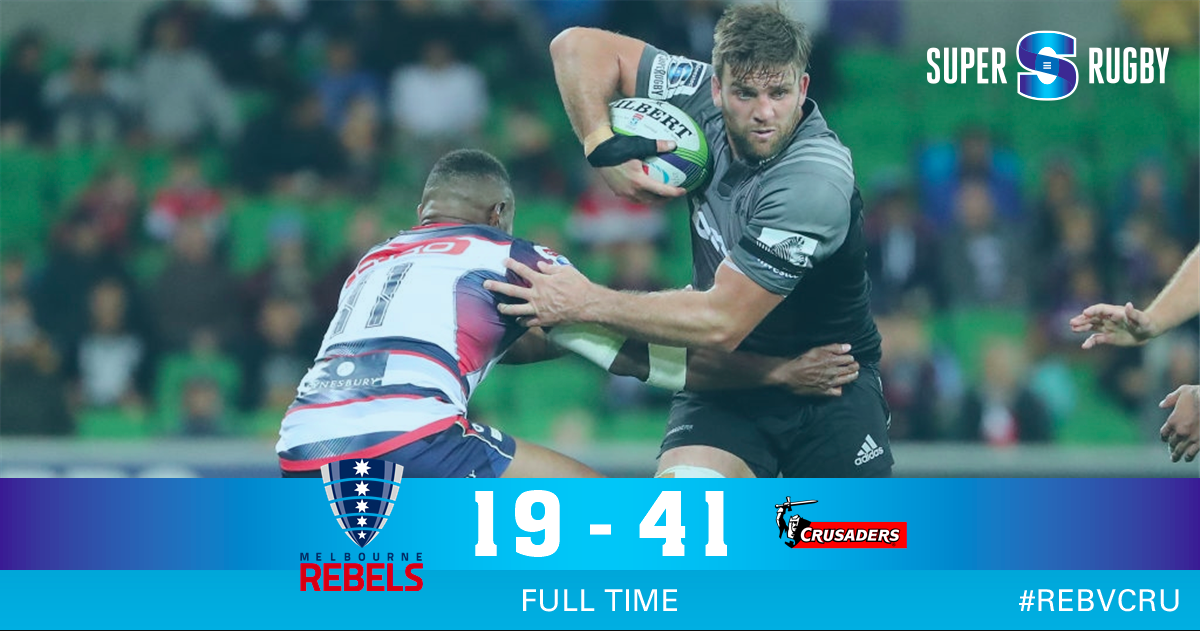