Mitchell Hunt’s amazing late drop goal secured a 25-22 win for the Crusaders over the Highlanders in a thrilling south island derby in Christchurch.

As expected, this was an entertaining affair between two of the tournament’s in-form sides and the game was in the balance until the end before Hunt’s secured the result for his team with his his snap-shot from 35 metres out with the final act of the match.

The result means the Crusaders have now won all 14 their matches in this year's competition while it ends the Highlanders' nie-match winnig streak. Both sides deserve credit for making this the entertaining spectacle that it was although the Highlanders will be kicking themselves as they dominated for large periods especially during the second half.

The men from Dunedin had the bulk of the the possession during the first half but the Crusaders made better use of their chances and led 19-10 at the break thanks to tries from Mitchell Drummond, Seta Tamanivalu and Heiden Bedwill-Curtis with Richard Buckman crossing the whitewash for the Highlanders during this period.

The tournament's pacesetters made a terrific start and scored their opening try as early as the third minute when Drummond rounded off several waves of attack after George Bridge, Richie Mo'Unga and Matt Todd were all stopped just short of the try-line in the build-up.

The Crusaders continued to attack and 10 minutes later they extended their lead when a superb line break from Ryan Crotty was rounded off by Seta Tamanivalu after gathering an perfectly-weighted long pass fom Jack Goodhue.

The Highlanders tried to take the Crusaders on at their own game but could not match the intensity and execution displayed by the seven-time champions during the opening quarter.

However, the Crusaders were dealt a blow in the 26th minute when Heiden Bedwill-Curtis received a yellow card for a cynical foul on defence, deep inside his 22, after referee Glen Jackson had given the home side several warnings for similar offences before that.

Five minutes later, the Highlanders opened their account when Ben Smith joined the line inside the Crusaders' 22 and offloaded to Richard Buckman, who crossed for an easy five-pointer.

Marty Banks slotted the conversion and added a penalty in the 37th minute which meant the match was evenly poised with the Crusaders leading 12-10.

The Crusaders responed in style, however, and two minutes after returninig from his stint in the sin bin Bedwell-Curtis ran onto an inside pass from Jack Goodhue before crossing for his side's third try just before half-time.

The Highlanders came out firing in the second half and two minutes after the restart Aaron Smith crossed the whitewash but his effort was ruled out after television replays revealed that Rob Thompson stepped into touch in the build-up. 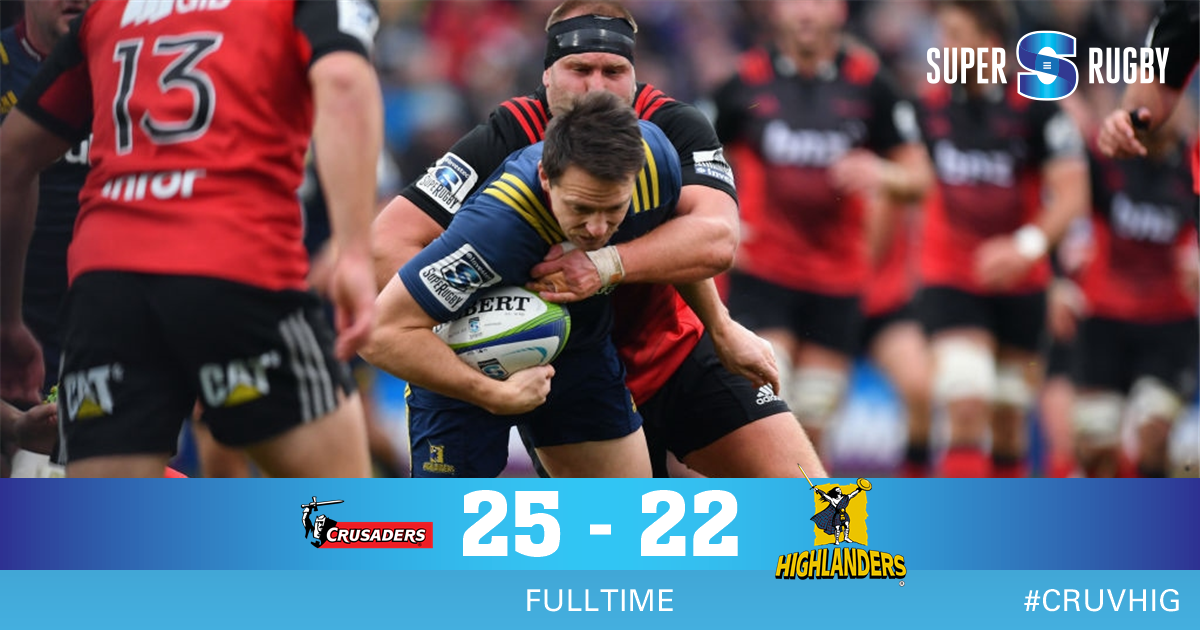 Five minutes later, Crotty lost the ball in contact and the Highlanders launched a counter attack. Malakai Fekitoa kicked into space and Bridge failed to gather. Waisake Naholo kicked the loose ball ahead and beat the cover defence before diving onto the ball behind the Crusaders' try-line.

Five minutes later, Naholo crossed for his second try after intercepting a long pass from Codie Taylor just inside the Crusaders half. That gave the visitors the lead for the first time and they continued to dominate for the rest of the half although – crucially – they could not extend their lead.

Despite trailing on the scoreboard, the Crusaders did not panic and Hunt drew them level via a penalty in the 77th minute. The seven-time champions finished stronger and were awarded a penalty in the final minute which Hunt pushed wide of the posts.

Despite that missed opportunity, the Crusaders continued to attack and after taking the ball through 20 phases, the ball came out to Hunt who secured the result for his side with his stunning drop goal at the end.