The Melbourne Rebels claimed a record-breaking 45-19 victory over the Queensland Reds in their Super Rugby opener at AAMI Park on Friday.

The Rebels, featuring a number of new impressive signings, made history by scoring seven tries - beating their previous record of six in a single game.

In the 10th minute the course of the game changed when Scott Higginbotham, the 25th captain of the Reds in Super Rugby, was red-carded for a high tackle with force to the head and this ultimately swayed the odds in the Rebels' favour.

However, despite their numerical disadvantage, the Reds dominated the early exchanges and were rewarded with a try. Samu Kerevi got a routine offload away in midfield that the Rebels thought had gone forward. Duncan Paia’aua couldn't believe his luck as he had an open run to the line with the Rebels guilty of not playing to the whistle.

Soon after, Lukhan Tui was sent to the sin-bin for his tip-tackle on Will Genia as the Reds went down to thirteen men for ten minutes.

The Rebels eventually capitalised on their numerical advantage when Caleb Timu's pass over the top found Sefa Naivalu on the overlap who ran in for his first try of the season. Jack Debreczeni knocked it over from in front to level matters on the scoreboard.

But the Reds just would not give up. Chris Feauai-Sautia made a busting run in midfield and produced a silky offload for Kerevi whose fine support running was rewarded as he got on the scoresheet.

Soon after, Genia's long pass exposed the 13-man Rebels on the left overlap as this time Tom English crashed over to once again restore parity on the scoreboard.

By this point the Rebels had well and truly wrested control of the game and soon Naivalu grabbed his brace to give the hosts the lead. Earning the right to go wide by sucking in the Reds defenders, Jaco Maddocks showed good vision to throw a nice, long ball out to the flying winger who had another routine dot-down in the corner.

Soon after, the Rebels had their fourth. Sucking in defenders with a rolling maul, Genia went left and used the quick hands of Reece Hodge and English to get the ball out to Dane Haylett-Petty who scored on his debut for his new side on the stroke of half-time as the hosts took a 26-14 lead in to the interval.

After the break the Rebels continued to mount the pressure with some powerful carries up the centre of the field. Debreczeni shifted his position as first receiver from the open to blindside quickly. Genia quickly found him and the fly-half broke the line to go over on the left side, making it 31-14.

Some silly play from the Reds then saw them leaking their sixth try as Pauiauia's careless no-look pass was intercepted by Dane Haylett-Petty who ran coast to coast and dot down for his second.

The Rebels put the gloss on the evening when Debreczeni joined the party, also grabbing a brace and his side's record-breaking seventh, with Genia once again the provider as the Wallabies scrum-half made it three try assists for the evening.

The Reds scored a consolation try through Feauai-Sautia, who finished clinically after good work by full-back Toua to break the line and find the winger with a long, spinning pass. 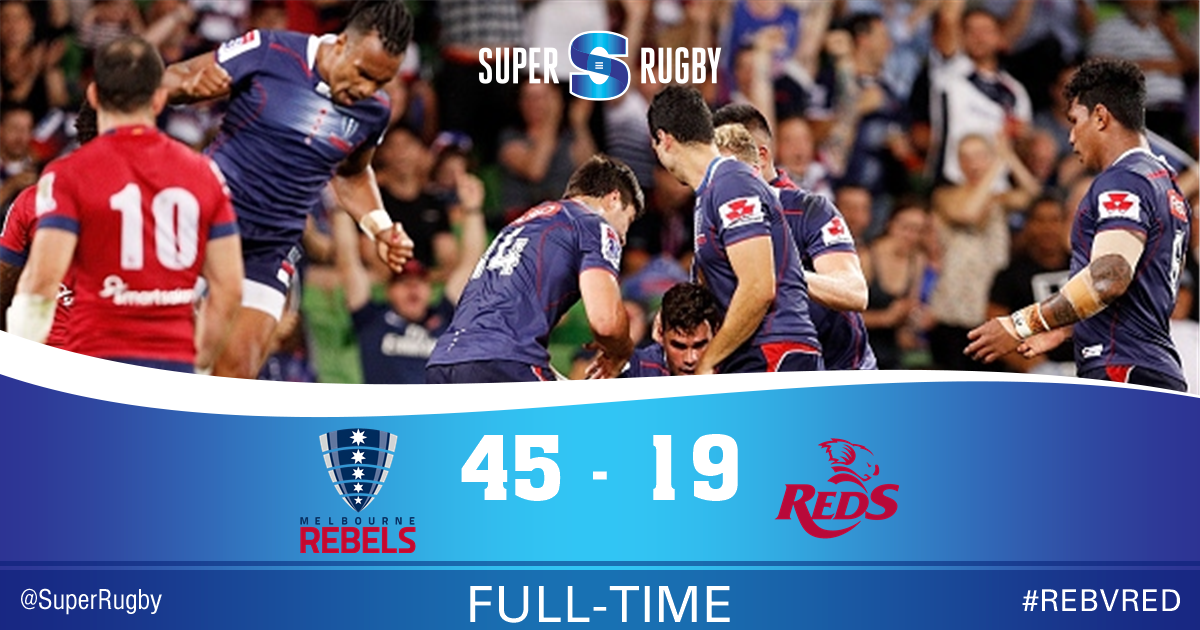