The Crusaders picked up their fourth win of the Super Rugby season on Sunday as they edged the Lions 14-8 at Ellis Park in Johannesburg.

Tries from Sam Whitelock and Jack Goodhue saw them to the points while Madosh Tambwe went over for the Lions, who suffer a third defeat.

Despite the loss the Lions stay atop the South African Conference, with a seven point cushion, while the Crusaders go level with the Hurricanes.

In a low-scoring first-half that saw the Crusaders go in pointless, just a solitary try was scored by the Lions through left wing Tambwe.

The Lions were looking to bounce back to winning ways after a poor run that has seen them lose to the Blues and Jaguares in their past three games.

They started in decent form on Sunday though as two evenly matched sides went face-to-face in a repeat of last season's Super Rugby final.

The visitors must have thought their luck was out when they had a score chalked off by the TMO as Hunt's pass to George Bridge was deemed forward. Five minutes after that another forward pass from Hunt to Bridge also saw play halted, with the wing eyeing the line once again.

The closing stages of the half was dominated by fine defensive work at the breakdown as both sides won relieving penalties for the cause, but one also felt the Lions were overplaying their hand, especially in the 40th minute as they wanted to play on instead of finding touch.

The Crusaders needed to score first in the second period and did just that on 50 minutes as Whitelock crossed wide on the left, with Hunt landing the touchline conversion to nudge his side 7-5 in front. It was a worrying moment for the Lions as the Crusaders upped the tempo.

So it proved as Manasa Mataele then set up Goodhue for their second try shortly afterwards, with the former's run getting the go-forward.

At 14-5 down the Lions then snubbed three points in front of goal, which backfired as the Crusaders' scrum stood up well when it mattered.

The Crusaders would almost cross again on 65 minutes when David Havili strolled over, but replays showed the impressive Mataele had stood on the sideline in the build up. That would have wrapped up the four points for the Crusaders but one still felt they looked comfortable.

And despite a late Jantjies penalty, the New Zealanders calmly saw out the game near halfway as they once again conquered Ellis Park. 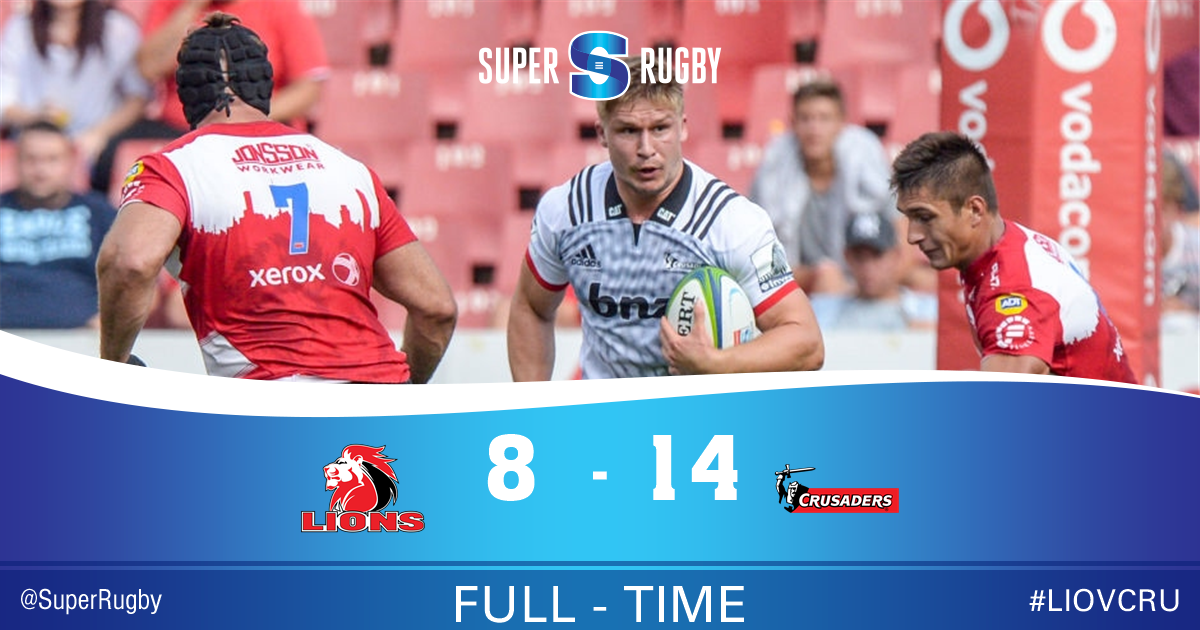