The Highlanders retained their unbeaten home record when they claimed a 43-17 bonus-point victory over the Brumbies in Dunedin on Saturday.

Aaron Mauger's charges were full value for their win as they outscored the Brumbies six tries to two with Ben Smith capping a superb all-round performance by crossing the whitewash on two occasions.

The result was a significant one as it means New Zealand teams have now won 34 consecutive matches against their counterparts from Australia with the last Australian triumph registered in Round 14 of 2016 when the Waratahs beat the Chiefs.

The Highlanders dominated early on and were rewarded in the eighth minute when Lima Sopoaga showed great determination to drive through a tackle from Blake Enever before crossing for the opening try.

Sopoaga failed with the conversion attempt before the Brumbies opened their account courtesy of a Wharenui Hawera penalty in the 16th minute after several of the Highlanders' forwards went off their feet at a ruck.

Despite that penalty, the Highlanders' dominance continued and in the 26th minute Ben Smith set off on a mazy run from close to the Brumbies' 10-metre line and beat four defenders before dotting down under the posts.

Sopoaga added the extras which gave his side a 12-3 lead but that did not deter the visitors who held the upper-hand for the next 10 minutes.

The men from Canberra spent most of that time camped inside the Highlanders' 22 and in the 35th minute, Isi Naisarani made a break from the back of a scrum on the home side's five-metre line before crossing for a deserved try.

Hawera slotted the conversion which meant the match was evenly poised at half-time with the Highlanders leading 12-10.

The home side made the brighter start to the second half and extended their lead courtesy of a Sopoaga penalty after David Pocock infringed at a ruck. Five minutes later, the Highlanders were reduced to 14 men when Sopoaga received a yellow card for a tip tackle on Tom Banks.

The Brumbies upped the ante on attack but were dealt a blow on the hour-mark when Waisake Naholo intercepted a wayward pass from the visitors inside his 22 before racing away to score his side's third try.

That try seemed to knock the wind out of the Brumbies' sails as soon after Sopoaga's return from his stint in the sin bin the Highlanders scored two further tries.

The first one came in the 68th minute, when Kayne Hammington won a crucial turnover inside his own 22 and the ball was shifted quickly to Ben Smith, who outpaced the cover defence before crossing for his second try.

And shortly afterwards, Shannon Frizell rounded off a flowing move, started by Rob Thompson close to the halfway mark, with Sopoaga's conversion giving the Highlanders a 26-point lead.

To their credit, the Brumbies did not surrender and after patient build-up, inside the Highlanders' 22, Joe Powell went over for their second try, from close quarters.

The Highlanders were not done though and were rewarded when Fletcher Smith scored their sixth try in injury time to seal a deserved triumph. 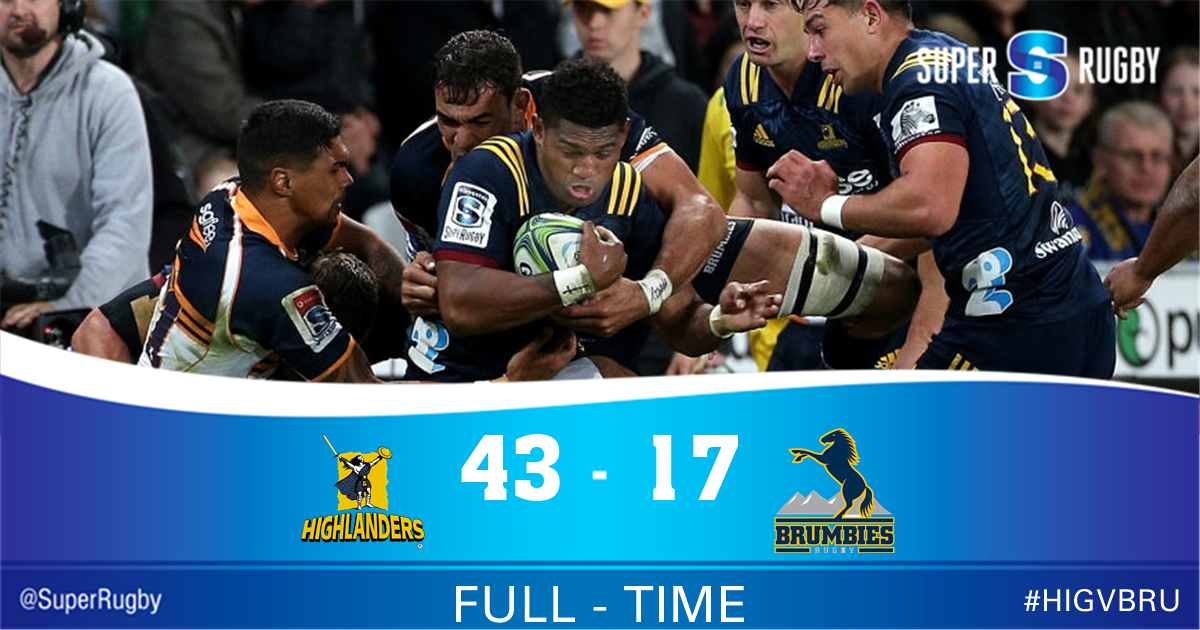