An injury time drop goal from Hayden Parker sealed a narrow 26-23 win over the Stormers in their Super Rugby clash in Hong Kong on Saturday.

In a tightly contested and exciting match, the Stormers thought they had won the game when SP Marais landed a long-range penalty from 55 metres out in the 77th minute but the Sunwolves drew level two minutes later when Parker slotted a three-pointer of his own off the kicking tee before sealing the win for the men from Tokyo with that drop goal.

The result means it's the first time that the Sunwolves claim back-to-back victories - after last weekend's win over the Reds in Tokyo - while it's a big blow for the Stormers' play-off hopes.

After a scrappy start, characterised by several handling errors from both sides, the game came alive in the sixth minute when Dillyn Leyds crossed for a brilliant try.

This, after he pounced on a wayward crossfield kick from Parker which landed midway between the Stormers' 10-metre line and their tryline. The Springbok wing set off towards the Sunwolves' tryline and after beating Parker with deft footwork he went over spectacularly in the right-hand corner despite a desperate tackle from Kotaro Matsushima.

The scrappy nature of this game continued with both sides committing numerous unofrced errors and in the 21st minute it proved costly for the Sunwolves when a pass from Willie Britz was intercepted by JJ Engelbrecht just outside his opponents' 22. He still had work to do but did well to shrug off a couple of challenges before crossing for his side's second try.

Jean-Luc Du Plessis added the extras which gave the visitors a 12-0 lead but three minutes later, the Sunwolves eventually opened their account when Parker crossed for their first try after Fumiaki Tanaka and Timothy Lafaele did well in the build up.

Parker also slotted the conversion which meant the Stormers held a 12-7 lead but the men from the Cape would go further ahead in the 33rd minute when Dewaldt Duvenhage stabbed a grubber kick through, deep inside the Sunwolves' half, before Leyds kicked ahead and got a hand onto the bouncing ball behind the home side's tryline.

Despite that try, the Sunwolves finished the half stronger and a penalty from Parker in the 38th minute meant the Stormers led 17-10 as the teams changed sides at the interval.

The second half started precariously with both sides battling to gain the ascendancy and there was little interesting to report during the early stages of the half.

The Sunwolves eventually got the rub of the green in the 57th minute when they launched a flowing move and after taking the ball through numerous phases, Michael Leitch offloaded to Grant Hattingh, who crossed for a deserved try with Parker's conversion drawing his side level at 17-17.

That try boosted the Sunwolves' confidence and in the 65th minute they took the lead for the first time when Parker slotted a penalty after the visitors were blown up for an indiscretion at a ruck.

The visitors drew level three minutes later, however, when SP Marais succeeded with a penalty after the Sunwolves were blown up for illegal scrummaging.

The Stormers regained the lead three minutes before the end when Marais kicked that monster penalty but the Sunwolves would clinch the win with Parker's heroics with the final act of the match. 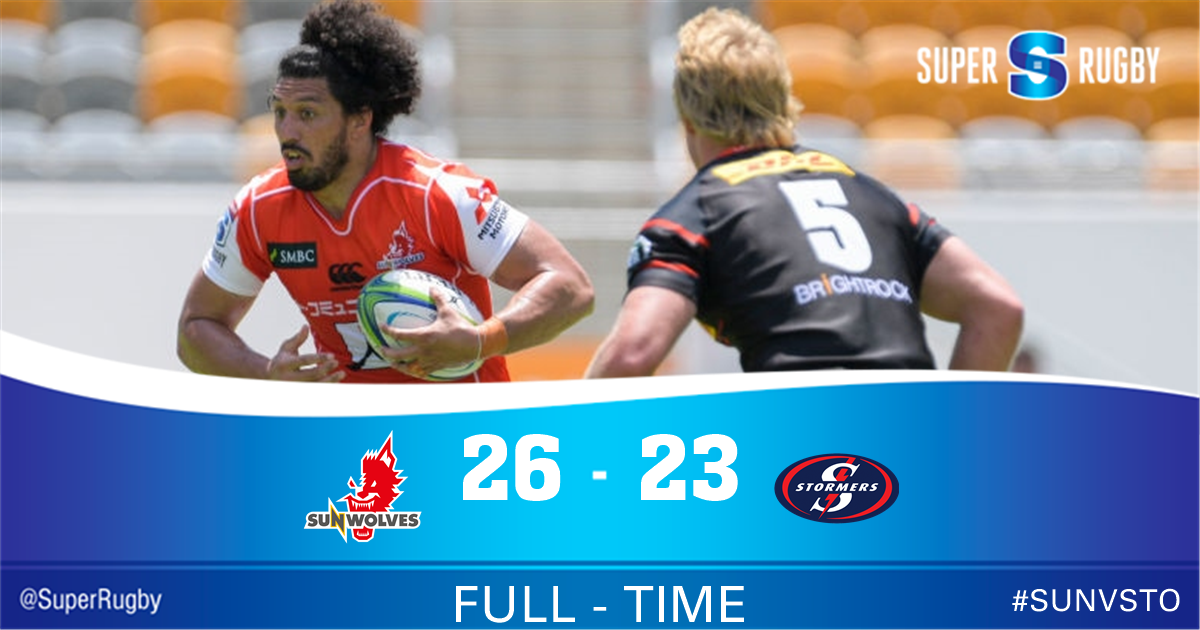