Tevita Nabura’s first half red card helped pave the way to a 41-12 victory for the Waratahs over the Highlanders in Sydney on Saturday.

The win ends a three-match losing run for the Sydneysiders who were full value for their win as they outscored the Highlanders six tries to two with Taqele Naiyaravoro and Israel Folau scoring a brace apiece.

The result is a significant one as it restores much needed pride in Australian rugby and ends a 40-match losing streak for teams from that country against their counterparts from New Zealand.

The home side had the better of the early exchanges and opened the scoring in the seventh minute courtesy of a Bernard Foley penalty, after the Highlanders infringed at a ruck.

Three minutes later, visitors thought they had taken the lead when Aaron Smith dotted down, after great interplay between forwards and backs, but his effort was disallowed after television replays revealed a forward pass from Luke Whitelock in the build-up.

The Waratahs made full use of that lifeline and five minutes later they extented their lead when Taqele Naiyaravoro found himself in space out wide – after strong carries from Israel Folau and Damien Fitzpatrick in the build-up – before powering past a couple of defenders on his way over the tryline.

Foley failed to convert but things went pear-shaped for the Highlanders shortly afterwards when Nabura was sent off for a deliberate kick to the face of Cam Clarke after the Highlanders wing gathering a high ball inside his half.

And two minutes later, the Highlanders were reduced to 13 men when Aaron Smith was sent to the sin bin for deliberately knocking on a pass from Curtis Rona.

The Waratahs made full use of their numerical advantage and shortly after Smith’s exit, Naiyaravoro avoided an attempted tackle from Waisake Naholo deep inside the Highlanders’ 22 before dotting down in the left-hand corner.

Foley succeeded with the conversion attempt which meant the Waratahs held a 15-0 at half-time.

They continued to dominate during the early stages of the second half and increased their lead in the 43rd minute when Israel Folau ran onto a long pass from Foley close to the visitors’ tryline before crossing the whitewash.

Foley converted again but the Highlanders finally opened their account shortly afterwards when, after taking the ball through several phases inside the Waratahs’ 22, Ben Smith delivered an inch-perfect crossfield kick which Elliot Dixon gathered before dotting down.

The Waratahs responded in style when in the 55th minute, Kurtley Beale, Sekope Kepu, Foley and Damian Fitzpatrick all handled the ball before Folau rounded off in the right-hand corner.

To their credit, the Highlanders did not surrender and were rewarded in the 58th minute when Ash Dixon dotted down off the back of a lineout drive deep inside the Waratahs’ 22.

The home side finished stronger, however, and were rewarded with tries from Lalakai Foketi and Curtis Rona in the game’s final quarter. Foketi capitalised on a great offload from Foley to go over for his try in the 65th minute and, three minutes later, Rona rounded off another wonderful team move to seal the win for the Waratahs. 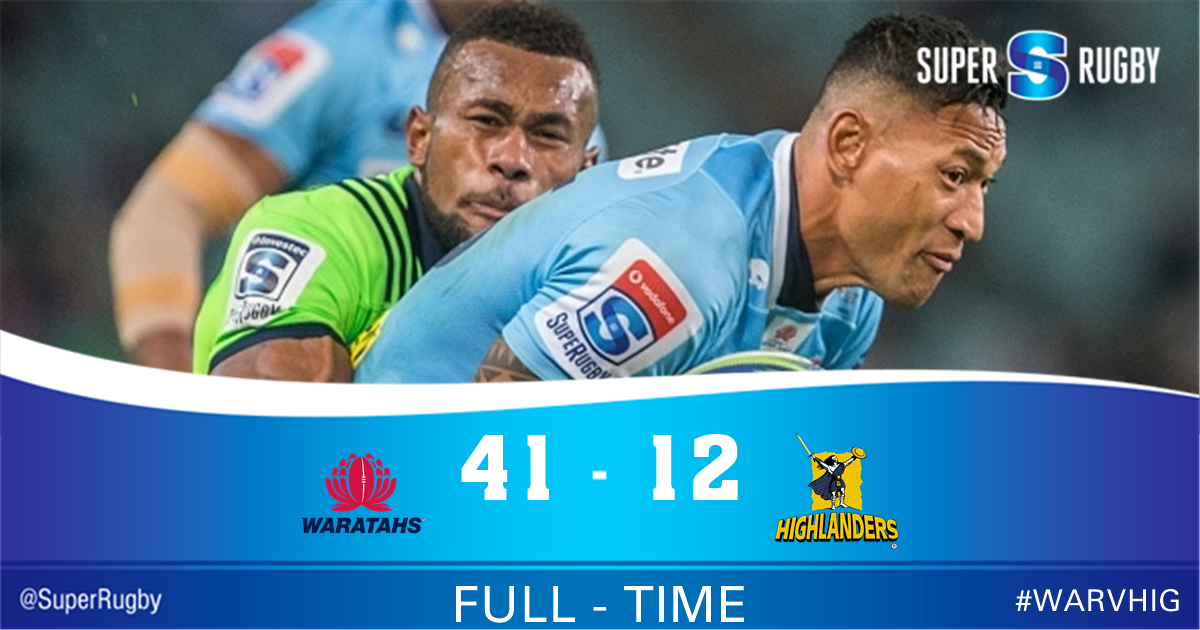