The Chiefs continued with their fine recent form when they secured a hard-fought 24-19 victory over the Brumbies in Hamilton.

In a highly entertaining encounter, momentum between the two sides ebbed and flowed with both sides scoring three tries apiece although the home side got the rub of the green in the end as they dominated most of the match and committed less unforced errors.

The result consolidates the Chiefs' position amongst the frontrunners in the New Zealand Conference while it ends the Brumbies' hopes of making the play-offs.

The Chiefs did most of the early attacking but, despite having a bulk of the possession, only had a 3-0 lead to show for their efforts midway through the half after Damian McKenzie slotted a penalty in the 13th minute.

The home side were running the ball from all areas of the field and that tactic finally reaped reward in the 24th minute when Nathan Harris barged over from close quarters after Charlie Ngatai laid the groundwork with a brilliant run in the build-up.

Damian McKenzie slotted the conversion which meant his side led 10-0 and on the half-hour mark he extended that lead when he ran onto a pass from Angus Ta’avao, just outside the Brumbies' 22, and slipped through a tackle from Rory Arnold before crossing for a deserved try.

Shortly before half-time, the Brumbies had their best attacking opportunity but after strong carries from Christian Lealiifano and Tevita Kuridrani, Arnold lost possession of the ball as he crossed the tryline after a superb ball-and-all tackle from Luke Jacobson.

That meant the Chiefs held a 17-0 lead at half-time but despite trailing by that huge margin on the scoreboard, the Brumbies did not surrender and dominated the early stages of the first half.

And after an extended period camped inside the Chiefs' 22, Henry Speight opened their account with a well-taken try in the 55th minute after quick hands from Arnold and Allan Alaalatoa in the build-up.

The Brumbies continued to dominate but on the hour-mark a wayward pass inside their 22 was intercepted by Damian McKenzie, who set off towards the Brumbies' try-line.

McKenzie was hauled in inside the Chiefs' 22 by Tom Banks but managed to get the ball out to his brother, Marty but Banks also halted his progress with a fine tackle. The ball was taken through a couple of phases before Marty McKenzie stabbed a chip kick through which was gathered by Johnny Faauli, who dotted down next to the posts.

Damian McKenzie's conversion gave the Chiefs a 24-5 lead but things went pear-shaped for them when Jesse Parete was yellow carded for a dangerous tackle on Matt Lucas in the 65th minute.

The Brumbies made full use of their numerical advantage and scored two tries during Parete's stint in the sin bin. First, Wharenui Hawera and Lucas combined before Lucas offloaded to Banks, who dotted down under the posts in the 71st minute.

And three minutes later, the Brumbies launched an attack at a lineout on the edge of the Chiefs' 22 with Speight running onto a pass from Lucas and busting through two tackles before diving over for his second try.

Hawera converted both tries which meant the match was evenly poised with the Chiefs leading 24-19.

The hosts had a chance to seal their win in the 79th minute when they were awarded a penalty within goalkicking range but Damian McKenzie pushed his shot at goal wide of the mark.

That set up a frantic finish but the Chiefs managed to hold on for the win. 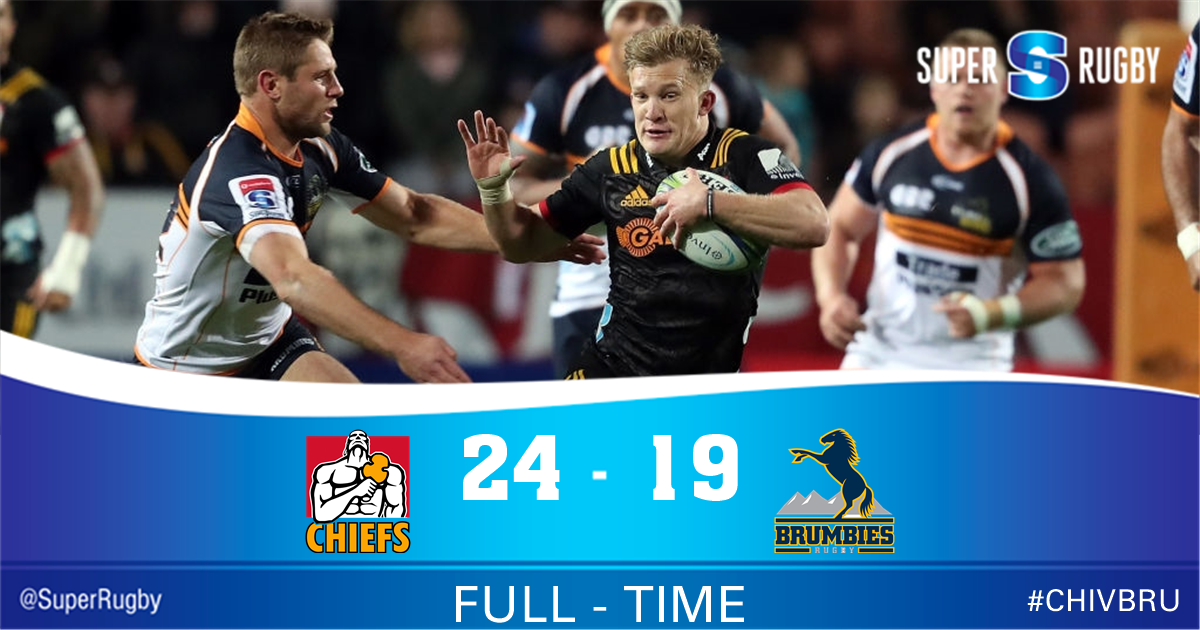