Rock-solid Sharks too strong for Blues in Durban

The Sharks secured back-to-back wins to kick off their new Super Rugby campaign after comfortably dispatching the Blues 26-7 at Kings Park.

The opening try was scored after just seven minutes, and came courtesy of a lost line-out from the Blues and some impressive play from the Sharks backs.

Lukhanyo Am put through the initial grubber, before Makazole Mapimpi kicked the ball on and collected it, throwing a deft little pass to fullback Aphelele Fassi who barreled over the line despite the attention of several Blues defenders for his first Super Rugby try.

The conversion was wide, but the Sharks stayed on the front foot and were soon rewarded with their second score of the afternoon.

After opting for a line-out rather than kicking at goal following a penalty in the Blues 22, the Sharks set up a short-range maul, and it was hooker Armand van der Merve who made his way through the scrum courtesy of a powerful drive before falling over.

This time Du Preez added the extras to give the Sharks a promising 12-0 lead, and only some desperate defence from the Blues forwards prevented the Sharks from going over for their third try as they managed to hold the ball up six inches over the line.

As the first half wore on, the stifling Durban heat was also becoming more of a factor and play was interrupted for a water break to give the players a bit of relief.

It wasn't long before the Blues found themselves under more pressure, however, and it eventually told three minutes before the break. Playing with the advantage following an infringement at the maul, the ball was shifted left and Du Preez all but strolled through a gap in the tired defence before adding the extras to put the Sharks 19-0 up heading into half-time.

The home side probably should have had their fourth try eight minutes after the break after a great run by Am down the right, but new arrival Curwin Bosch, who had come on for injured winger Sibusiso Nkosi shortly before half-time, couldn't execute the final pass.

The Blues thought they had their first score in the 57th minute when flyhalf Otere Black dotted down after the ball was shifted through the hands from right to left, but TMO Marius Jonker intervened, ruling out the try after spotting an obstruction from the back of the scrum that started the move.

The visitors did have their try five minutes later, though, another backline move doing the trick as substitute Tanielu Tele'a found the gap and crossed the line to bring the deficit down to just 12 points with 17 minutes remaining.

The Sharks needed cool and calm heads but that wasn't what lock Ruan Botha provided when he was sin-binned in the 68th minute for a cynical foul.

The momentum had shifted the Blues' way now, but they weren't able to make their one-man advantage count, and the Sharks managed to hold them at bay until Botha returned to the field.

And with the clock winding down and the result all but secured, the Sharks bagged their fourth try of the afternoon courtesy of an intercept from Bosch, who was able to run all the way home before Du Preez added the extras to make it two Super Rugby wins from two for the Sharks to kick off their season. 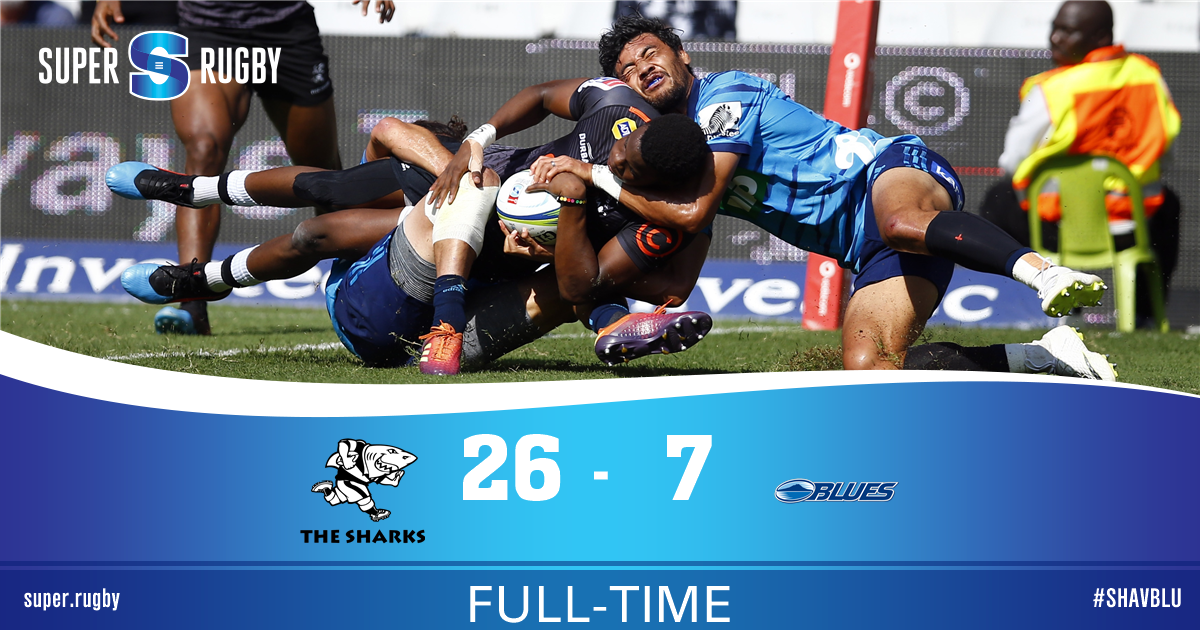