The Lions fought back from 33-5 down to beat the Rebels 36-33 courtesy of an incredible second-half comeback at Ellis Park on Saturday.

The Rebels looked to have done enough to secure victory after a dominant first-half performance, but the Lions were able to produce an incredible four-try blitz in the final half hour to draw level, before substitute Gianni Lombard converted the winning penalty after the hooter to complete the dramatic turnaround.

The home side actually drew first blood in the sixth minute, scoring their first five-pointer of the day after a short throw in from an attacking line-out. Hooker Malcolm Marx threw it to prop Dylan Smith, who quickly threw it back to Marx who fell over in the corner.

But after that early score the remainder of the first half was all Rebels.

The Aussies drew level just three minutes later after a straightforward backline move saw the ball go through the hands from right to left before winger Reece Hodge darted over in the corner.

And four minutes later they were in front courtesy of an absolute peach of a try. The Rebels made the break way back in their own 22 after Billy Meakes stole the ball and took it all the way up the field, with Anaru Rangi getting involved in the action with a clever offload before Quade Cooper applied the finishing touches.

The carnage continued in the 21st minute courtesy of an intercept from Meakes on Elton Jantjies, who only had to complete the simplest of runs up the field to score his side's third try.

It took just another three minutes for the Rebels to score their fourth, the TMO awarding the try this time after Isi Naisarani scrambled towards the posts before being adjudged to have placed the ball fairly against the base of the upright.

Cooper secured his third conversion of the afternoon to hand the Rebels a 26-5 lead heading into half-time.

The Lions looked absolutely dead and buried when the Rebels scored their fifth try just two minutes into the second half courtesy of center Tom English, who ran straight through a tired Lions defensive line, but something remarkable was about to happen.

It was a sinbinning for Meakes in the 47th minute following an accumulation of penalties that sparked the comeback, with the Lions scoring their second try just four minutes later after some concerted pressure saw Wandisile Simelane set up the space for flanker Marnus Schoeman to finish.

Four minutes later they had their third courtesy of replacement Andries Coetzee, who took a smart pass from Jantjies before darting over in the corner.

And they would score another try before Meakes finally made his way back onto the field, as a fresh Lionel Mapoe overtook Quade Cooper after a kick through before collecting and dotting the ball down just before it went out of touch.

The hosts finally drew level in the 63rd minute courtesy of Courtnall Skosan, who got all the glory after an initial steal from Marx saw the ball go out to Kwagga Smith, who was able to release the winger on his inside shoulder for yet another score.

Jantjies added the extras to tie it up at 33-33 with 15 minutes still to play.

A rattled Rebels side simply couldn't regain their composure, and when they were reduced to 14 men again with a few minutes left to play when Angus Cottrell was yellow-carded, the Lions sensed their opportunity.

It was a powerful scrum that saw the Rebels give away the penalty and present new arrival Gianni Lombard with the shot at goal in extra time, and the youngster made no mistake, slotting it over to complete the dramatic turnaround seconds before the final whistle blew. 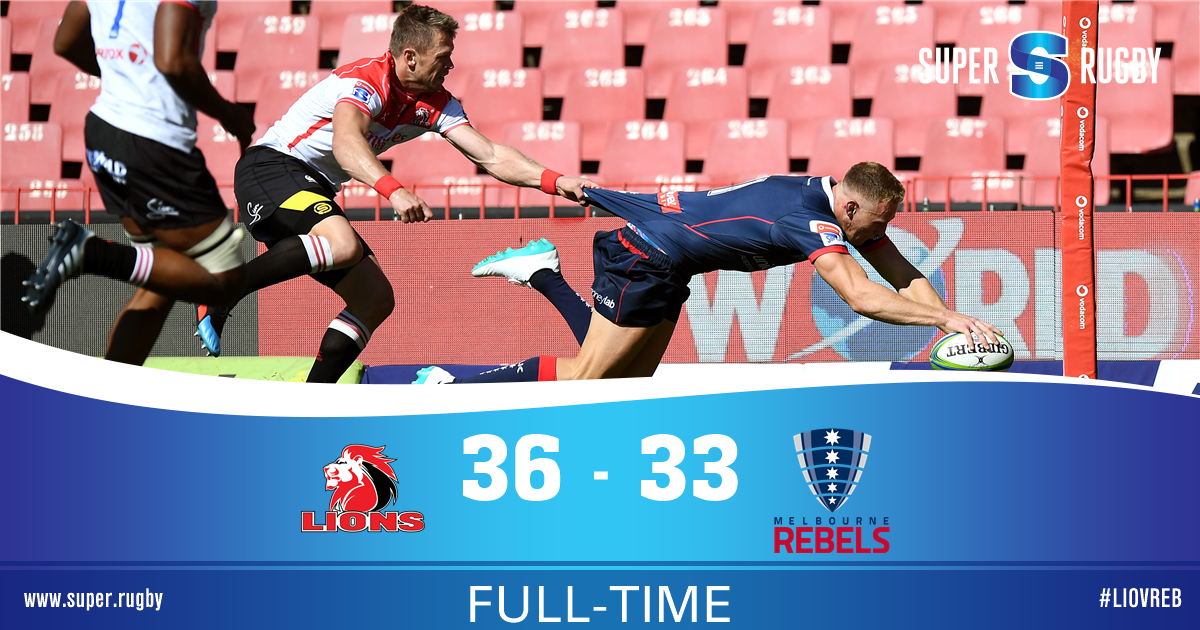