The Chiefs continued their Super Rugby revival after a horror start to the season with a dramatic 30-27 win over Argentina’s Jaguares in Buenos Aires.

Two substitutes combined to snatch the match-winning try for the New Zealanders on 78 minutes with loose forward Taleni Seu breaking from a scrum and sending scrumhalf Te Toiroa Tahuriorangi over.

Fullback Damian McKenzie raised his match points tally to 20 by converting from near the touchline to give the Chiefs a three-point advantage which they defended until full-time.

It was the second away victory in a row for the Chiefs after losing their first four matches in the 15-team southern hemisphere championship.

A draw with fellow Kiwis the Hurricanes stopped the rot before they humiliated the Bulls 56-20 in South Africa last weekend.

Victory in Argentina lifted the Chiefs four places from last to 11th in the combined standings while the Jaguares remained 14th and the Tokyo-based Sunwolves fell to the bottom.

This was the third match between the teams and all have been close encounters won by the away side with Chiefs 30-26 victors in 2016 and Jaguares 23-19 winners last season.

“It was bitterly disappointing to be beaten at home after leading by four points with just a couple of minutes remaining,” admitted Jaguares captain and centre Jeronimo de la Fuente.

“Losing three matches in a row is not a nice situation to be in and now we travel to South Africa for the second time this season, to face the Bulls in Pretoria.”

The Chiefs survived early pressure to dominate the opening half and build a 17-6 half-time advantage on a perfect night for rugby at Estadio Jose Amalfitani in the Argentine capital.

A McKenzie penalty three minutes into the second half stretched the lead to 14 points before the Jaguares took control and scored two converted tries to draw level.

Another McKenzie penalty put the Chiefs ahead again only for Matias Orlando to score a try for the Jaguares which fellow substitute Santiago Gonzalez Iglesias converted.

Trailing 23-27, the Chiefs established a foothold deep in Jaguares territory and almost scored several times before Tahuriorangi darted over for the decisive try.

The match brought an exciting climax to the seventh round of matches after big victories earlier Saturday for the Blues and Melbourne Rebels and a narrow win for the Bulls.

McKenzie scored a try and kicked three penalties and three conversions for the Chiefs with centre Tumua Manu and Tahuriorangi the other try scorers.

Tuculet, Matera and Orlando scored a try each for the Jaguares, Bonilla kicked two conversions and two penalties and Iglesias slotted one conversion. 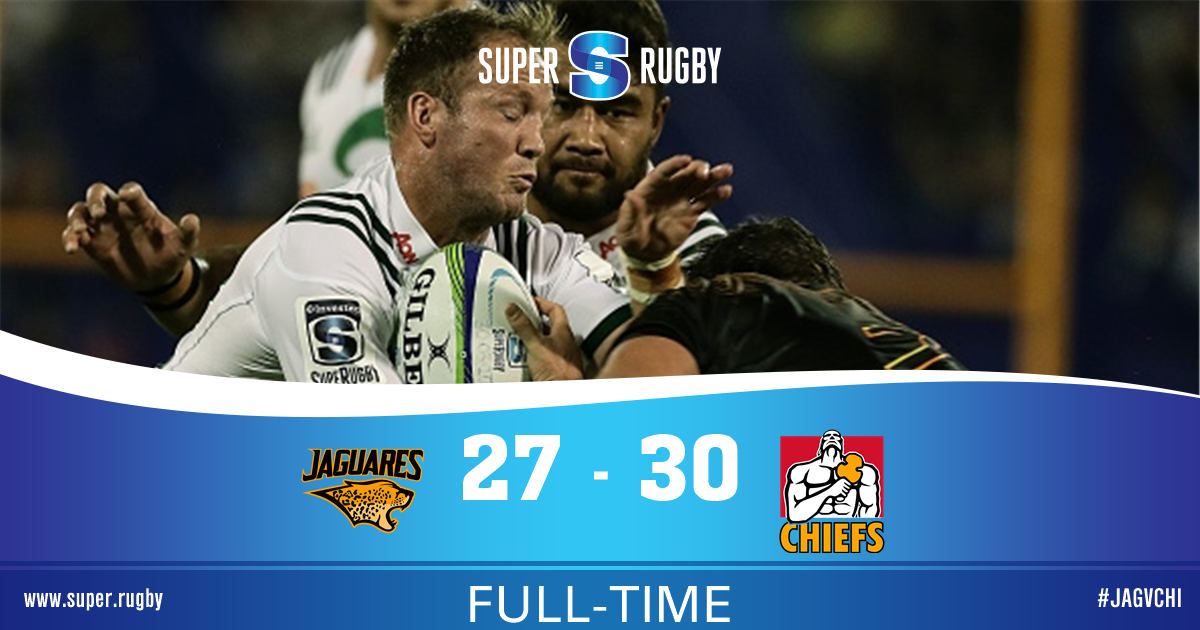